A Destructive God Sits Next to Me - Recommendations 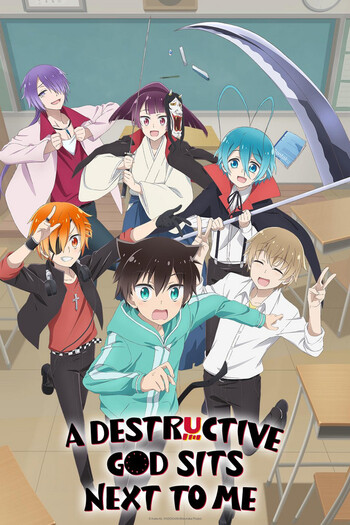 If you're looking for anime similar to A Destructive God Sits Next to Me, you might like these titles.

Absurd school-life anime that features a main character trying to avoid the friendship of those around them.

The Disastrous Life of Saiki K. has a few parallels with A Destructive God Sits Next to Me and the humor is very similar.

Mizuki Hijiri just transferred schools, but her chances of having a quiet high school life shatter when she meets the eccentric members of the Hero Club! These “chunibyo” dudes and their youthful delusions of grandeur quickly sweep Mizuki into a world of outrageous hijinks and nonstop fantasy. Noda dreams of becoming a hero. Takashima, resident otaku, longs to date only 2D girls. Tsukumo fancies himself the school’s master manipulator. And then there’s Nakamura, a reincarnation of an angel… or a devil, depending on the day. Mizuki has her work cut out for her in the Hero Club, because while their delusions might be the stuff of fantasy, the trouble they cause is as real as it gets!

There is a lot of people (for some reason) with chuunibyu sickness (or wth), the thing these anime has in common is that both of their MCs are like: "What the hell am I doing with my life...? Why does these people stick to me so much?" So yes, both of the MCs are normal, but there are people with chuunibyu that are calling them some weird names like: Gehtebor (or smth like that) and Pink....

Both are comedy series about a group of chuunibyou (that is, highly delusional people who believe they are some sort of reincarnated chosen ones with supernatural powers) constantly annoying the only sane person in the cast with their hijinks.

IMHO, they rely a bit too much on cringe comedy and I often ended up feeling sympathetic or embarassed for the MC rather than amused, but the style is so similar that there's no way fans of one won't enjoy the other.

If you enjoyer the ridiculousness of one, you'll enjoy the other :D Binan is slightly less packed with facepalming situations, and it has an actual *ekhem* p-plot *cough cough* but it doesn't make it any less funny, or the Destructive... too intense. Both series feature a specific kind of humor that might seem too much at first, but makes you actually snicker after a while.

Well... Daily lives of high school boys it is, one is pretty normal, the other - not so much, but they're similarly ridiculous. You'll definitely enjoy the same type of humor, just in a different packaging.