Only I Level Up: Solo Leveling - Reviews 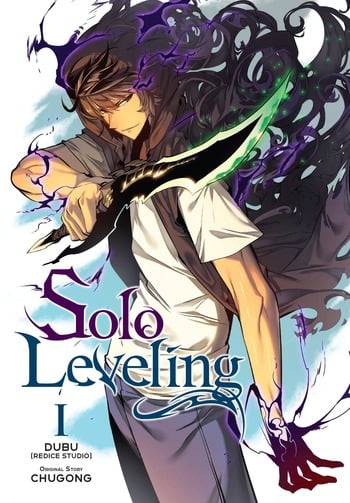 This is from the get go a retarded series in a retarded setting. The author doesn't seam to want to bother much with worldbuilding, character creation and development or simply setting a coherent set of rules for the... powers? the hunters get, he seems to want to skip it all and to be honest that would be my recommendation if you want to read this, just skip the first 11ch (inexistant world building and character presentation) and you'll be better off for it, after that the next chapters are about dumb monologues, posing and the MC getting cocky, which seem to be the author trying to justify (and fail at it) how the MC changes. If, you somehow pretend those 25 or so chapters don't exist and you just pretend the char was somewhat strong, has a cheat skill and is a badass then you might enjoy this somewhat since from there it's a classical shounen with RPG elements.

Having said that, I find it hard to ignore those appalling 25 chapters, above all the lack of trying on the part of the author to make sense of the world is annoying, don't force what you want it to be for no reason and no valid justification, what happens in this manhua just make no sense for modern age Korea/world. If you set the world in modern earth then you have to abide by it, otherwise just transport the MC to another world or invent a parallel universe, and you can set all the new rules you want that way without so much need to explain. The only good possible explanation for all that happens is "simulation theory" but I really don't see the author going there and even if he does, it's very poorly executed so far. Likewise, the character setting is equally terrible, we are led to believe he does this for his mother yet he dedicates about one panel of the story to explain this, it's never mentioned again and come on! how is getting yourself killed in a gate is going to make your sick mom's and your sister's (that depends on you for a living) life better? if he dies his mom doesn't get medical care and his sis can't support herself anymore, also lets not forget the author insist on telling us the MC doesn't make ends meet with hunting so the justification itself is nonsense, not only there is a very high and real chance of him dying but he doesn't even make money from it. Last this is full of inconsistencies and the MC turns like a pancake so much he essentially becomes a different person, with him getting OP in no time, giving ridiculous explanations and him oscillating from retard to so cool just because the author wills it makes my eyes hurt, just look at the char design in ch 1 and then again in ch 50 and you'll see what I mean, they are nothing alike and only a few month went by.

In short, as a whole it might be somewhat decent manhua if you get through the initial chapters and are able to ignore them it gets better, after that it's a somewhat enjoyable yet somewhat mediocre, light, action packed shounen manhua that focuses on how "cool" the MC is and how OP he is and nice fighting scenes. Oh, art-style is very good thou the flow of the fights is a bit hard to follow at times.

Real Talk, I'm tired of seeing these "omg this manhwa is so good you should read it the story is so good and the mc is so overpowered and kicks everyones ass in a bad ass way" reviews. These reviews are dumb as fuck and they don't contribute anything. The review don't look at the Manhwa from a story stand point and how well developed characters are. When they just see Sung-JinWoo pull something bad ass off they say "oops, 10/10, will read again".

The story.. isn't special. Usual Weak to Strong story that you can find basically everywhere. Sung-Jinwoo, A weak person, goes through a near death experience and is handed cheat powers. Take those words into account and apply those words to all the other manga, Manhua, and Manhwas that apply that concept. Quite a lot right? Correct, this story concept isn't original BUT it all depends on the execution on that concept. I must say that the execution is.. decent at best. When he gains those cheat powers he starts training because his cheat told him to. Then, whoopty fucking do, he goes up 2 ranks and he didn't even get out of the hospital yet.  After that he just does one dungeon and he's already on par with a B-Rank hunter (If you read solo levelling you know that B to A rank hunters are nothing compared to Sung Jinwoo but these guys are supposed to be the Main High ranking hunters of hunter guilds and he just became one in like, what, a month, maybe less?). He further gets cheat abilities via Job mission, defeats a Red gate boss, then when he clears a couple floors in the Demon Dungeon, he's already barely an S rank by chapter 57. Basically this story is just Sung-Jinwoo kicking ass but just as discreet as possible. Do I like it? fuck yeah I love it, but that's just because I wanna see Sung-Jinwoo further become stronger and see what he does in the future. Other than that, realistically this story has barely any character development. After he completes his goal that has to do with his mom he's literally just on a conquest to kick ass and chew bubble gum, and he's all outta gum (And very soon, he'll be outta ass.)  Art is a 10/10 btw, Art is consistent, really detailed, and the story has a lot of bad ass moments that make you want more. Thats literally it, nothing more, nothing less.

Also I know the Manhwa isn't finished, I'll probably change the review when the Manhwa is over (which won't be for a long time).

Edit: Btw I fucking love this Manhwa, but can't be biased with reviews.

It is BY FAR MY FAVOURITE MANHWA ***in this genre*** that I have EVER read.
It is one of those MUST READ!!!
I don't usually write reviews , unless it is worth expressing my true feelings XD
So here comes my attempt to not spoil everything but make you interested in readig it)

I get that first 10 chapters are kinda hard to get over, but after that the most interesting part beggins.
And even if this is one of those OP characters stories , it is a lot more captivating than many others you've read.
This manhwa has absolutely everything you need. Action , adventure , supernatural powers , magic (good and bad) , fantasy a weak to strong Main character , social life , secrets and breaking of rules , dungeons and very interesting moves and actions from all the characters involved.

So the main story line is MAIN CHARACTER developing his skills and becoming more powerful.
It was such an intense reading how he was becoming who he is now at chapter 110. Even his appearance has changed , he absolutely DEVELOPED.
This is what I like the most about it. And moreover , he is not stupidly boasting about it to everyone around.
But instead he is kinda stealthy and descreet about his actions.

The only thing I didn't like about the story SPOILER AHEAD!!! was the chapter about insects island. Which sounded a lot like HunrterXHunter stolen idea XD. Or maybe this was just a coincidence that the enemies were also insects XD ***

I am usually not very spoiled about the art quality or format , but this manhwa was one of those beautiful mangas you can hardly find nowadays. It has a lot of pretty effects and the QUALITY is absolutely astonishing .
Expecially the blue and black flame - shadow thing I ABSOLUTELY ADORE IT <3

Well. People might think a lot different than me - but I liked every single character - even the villains)
They all have their inner world and a story to tell.
And every single one has a truth that they believe in , so I deeply care about every single one.

SO It is just my advice - Just try to read it.
If you get to chapter 30 without noticing how time passes - You'll officially be named a FAN

It is worth waiting for every weekly chapter
(this is such a pain OMG , I hate waiting)

This manga is the defenition of a perfect masterpiece.

Solo Leveling is a manga with the leveling aspect simular to ''the gamer or shield hero'' where we follow the breathtaking journey Sung Jin-Woo who is at the weakest amongst all hunters ''E-Rank'' fighting his way through many life and death experiences and hardships.

I love this manga. Actually if you ask me im pretty new to things like anime or manga. But i still love this manga. When i started reading it i just could not stop and read it in a day. (even though i do that very often i normaly finish one at 10 pm but i finished this one at 8m I think)

i really like the fact he grew so strong. Its like i dont care that hes over powered. Bc i do not care.

even though he got strong he still did fase hardship and many deadth close situations. Even though he was weak he didnt give up before and still hasent given up.

the story is great and the characters are beautiful but most importantly the ART IS AMAZING. Ive never seen a style like that for a manga and i mean I LOVE that art style. The style is nice, its not way too detailed and its not too basic.

I highly reccoment this manga. In my opinion its very good ^^