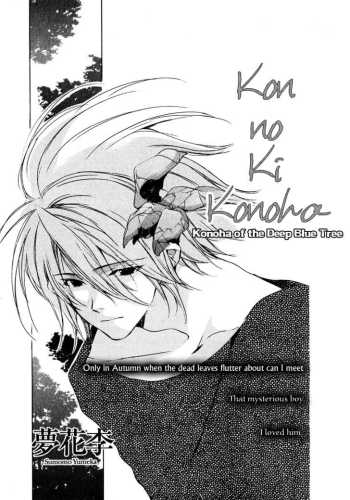 The second story in Hotarubi no Mori E (Into the Forest of Fireflies' Light) is very similar to Kon no Ki Konoha and involve a young girl meeting a teenage boy spirit, and the young girl growing up with them.

Ch2 of Hotarubi no Mori e and Kono no Ki Konoha are both one shots that deal with a growing relationships between a young girl and a forest spirit. If you like crying, you'll enjoy both of these, you masochist.

Both manga tell the story of a human girl growing into a teenager and falling in love with an unaging forest spirit that she can only visit at certain times each year. A melancholic romance that can never fully come to fruition.

Both series feature romantic relationships between spirits and humans, with a young girl meeting a spirit but can only see him for a short period each year. As the girl grows older but the spirit stays roughly the same age, both have to confront the reality of their relationships.

"When winter came, you swept away my sadness. When it passed, the memories of you lingered in my mind." A love that transcends time between a winter spirit and a girl broken with sorrow...

Suggested reading order is in the order of the seasons: Kon no Ki Konoha for autumn first and then Boku wa Kimi no Shiro for winter.  The idea of moving on from a painful loss vs. remembering your loved one is explored.  Thematically, they complement each other well.

"You will be my wife." At an early age, Midori was told this prophecy from a mysterious and beautiful young man. Even though Midori has an ability to see "unwordly things", she initially believed that the prophecy was a dream. However, it is later revealed that the true form of the man from the prophecy was Shirogane, the spirit of archery! After some time, Shirogane, who appears before Midori again, requests Midori to become his wife. Gods, who carry the burden of impurities, are revived by the skin of maidens. Midori has an especially strong yet hidden "cleansing" power that could potentially aid the Gods. Although Midori has so far lived a solitary life and has difficulty associating with people directly because of her power, she decides to get married in order to help. However, "becoming the bride of a god" is something that's beyond imagination and full of horrible chaos and dazzling pleasure.

The god that got banished to the mortal world got an offering... Huh...what?! It's a guy?!

Keiji's hometown is a bit weird, and among the strange customs is the funeral each person has for themselves when they turn 33. He's come back for the "funeral" of his former best friend Hakuga, but being back is bringing back memories of his relationship with Hakuga, and the feelings he never thought he'd have to deal with again.

Satoka is the daughter of a local shrine and lives together with Kotori, who may look like a normal and energetic girl, but is actually a matchmaker god in training. This series is about them, Satoka’s childhood friend Shiori and the mysterious Hiwa dealing with their everyday lives and the relationships around them.

Yuri starts her extravagant cruise trip alone, after her aunt calls her and asks Yuri to go in her place since she had to work. However, since Yuri was just dumped by her boyfriend, she couldn’t enjoy the trip at all. Then, she is called by an audacious young boy, however, the next time they met, he turns into an adult?!

Rin Hashiba lives together with her grandpa. One fateful day, while offering a prayer to God at the temple, a demon named Char appears before her. Seeking the blood of a virgin, Char is lewd, mean, and quite full of himself. He may act high and mighty, but in reality, he's very loving and kind. Even though she knows it's forbidden, Rin's body and mind are bound to fall into the demon's clutches one day...

Even in the god's world, the stratified society exists. The patron god of the Hoozuki Shinto Shrine, Kagachi, lives as a god who doesn't stand out in a shrine that is called the Abolished shrine. He is pessimistic towards everything and always says, "Living is painful..." One day, a girl appears in front of him. Her name is Nonomiya Haru. She forces herself to step into the shrine and live in it. Falling in love with a human girl, seeking for death all this while, the god's love story begins here...!

Shiina Momose doesn't believe in fortune telling and the occult, but for some reason, she can destroy anything with a touch. One day while on her way to school, a young man approaches her and claims to be a God. Furthermore, he believes that he was guided towards her and for that reason he has become convinced that she should become his first follower! Naturally, Momose refuses; but when strange things began to happen... she can not do something about it!