As I’ve said for many years, I love the typical, oft cliche slice of life romance genre of anime. I’m sure that most people reading this review have seen at least a few examples of these tropes; the lead male protagonist meets an exotic girl and they slowly fall in love over the course of a series. I mean who could love a genre that does the same thing over, and over, and over again? Obviously some idiot who has no good taste in anime. Joking aside, what brings me and other lovers of slice of life back to the genre again and again is the unique twists that each anime puts on the same formula. For some anime it’s strongly written, complex, relatable characters. For others it’s animation that makes the characters seem real to its audience. Still other anime try to connect to the viewer on a personal level. Whatever direction an anime takes, it should grant the viewer a unique viewing experience that’s at the very least entertaining but also hopefully thought provoking and emotionally captivating. So what is it that distinguishes Ano Natsu de Matteru from other anime in the genre? FIGURE 1: YOU GET A CONFESSION! YOU GET A CONFESSION! EVERYONE GETS A CONFESSION! People who praise Ano Natsu commend the characters’ willingness to take actions on their feelings. Confessions are certainly an exciting part of romance anime, but they only work if the audience is invested in the characters confessing their feelings. The problem with Ano Natsu is that the characters are simply not interesting enough for the viewer to care about what happens to them. That’s not to say that the characters don’t have their moments; in particular I thought Kanna Tanigawa was a surprisingly good third wheel character by the end, and I absolutely loved Remon Yamano’s aberrant yet hilarious contributions to the ensemble. Kanna does an excellent job of getting the viewer to root for her through her fierce determination, despite it being evident from the beginning that there’s no chance that she’ll have a happy ending. She stood out a little more because the lead girl wasn’t the most interesting, but even on her own I’d consider her a pretty strong character. Remon almost single handedly saved Ano Natsu from the “mediocrity zone.” She’s the only character in the anime whose archetype isn’t ridiculously overused (childhood friend, exotic girlfriend, shy quiet girl with a secret etc.). She seemed to help advance the plot along when it got stale, and she was always guaranteed to provoke a few laughs when on screen. The rest of the main ensemble, by contrast, seemed to be retreads of characters that we’ve seen before. Honestly I thought that this anime was the type of show Haruhi Suzumiya had in mind when she was filming her own movie. You have the bishonen friend (Tesurou/Koizumi), the quiet girl there for fanservice (Mio/Mikuru), and while certainly not the same in personality, there’s still the obligatory alien character (Ichika/Yuki). The difference that makes The Melancholy of Haruhi Suzumiya a modern classic and Ano Natsu de Matteru simply a solid anime from the early part of the decade is that Haruhi Suzumiya played with the tropes that made up these characters and developed them before the characters started confessing to each other left and right. Ano Natsu seemed to not give the characters full development until after they made their feelings known, which makes the scenes far less effective and the plot sequencing seem almost backward. The technicals of Ano Natsu aren’t really anything to write home about. The animation in Ano Natsu is definitely above average, but not to the level of Tatsuyuki Nagai’s other works. I didn’t feel the same impact in the character animation as I did from his other works, particularly Toradora! and The Anthem of the Heart. Looking back, the characters did appear expressive, but not in a way that really stood out like in Nagai’s other works. Sometimes it’s difficult to know whether the animation was inferior due to budget/time restraints, lesser source material, or substandard direction. Quality aside, I was surprised to see the level of fanservice in Ano Natsu that wasn’t present in Nagai’s other works. It seemed like there were breast shots and crotch shots at every opportunity, which was incredibly awkward for an anime of this tone. I admit that I’m a bit of a prude when it comes to fanservice, but even then many of the fanservice shots just seemed random and distracting. The voice acting and music were mostly passable. I swear though that the opening music could have been replaced by the music from Destiny of a Shrine Maiden and no one would have known the difference. Despite Ano Natsu de Matteru being solidly above average, I find it hard to recommend over Tatsukyuki Nagai’s other anime, or even anime of similar quality in the slice of life genre. While Ano Natsu doesn’t make any major mistakes, it doesn’t have enough distinguishing qualities (besides the fact that the characters confess a lot) to make it stand out in the ocean that is slice of life. But if you’re a fan of the genre (or Nagai’s work in general), it’s worth checking out. Just don’t expect it to be one of the greatest anime you’ve ever seen.

My anime reviews are always simple, short and straight-forward and is 100% spoilers-free.Genres: Comedy, Drama, Romance, Sci-fi, Shounen, Slice of Life Additional Info: Love Pentagon, if you know what it means. Ending Rating: 88%Short Review: An excellent anime overall. The anime has a nice blend of comedy, drama and romantic moments and also mix that with a litte bit of intense action scenes. There will be scenes where you will feel like you wanted lock the door and sulk but still doesn't make this anime not worth of giving a try. 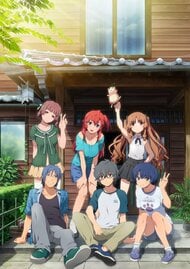 Waiting in the Summer: In Our Last Summer in High School, We Await That Summer 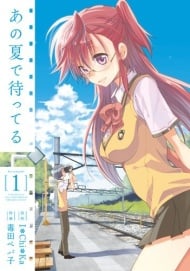