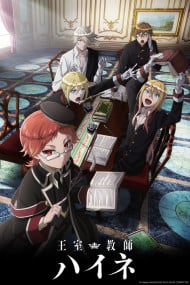 Ok so we have been given this little treat of an anime for this season and I must say I'm certainly surprised at how much I am enjoying it to the point it's now my favourite of this seasons . It's humorous and enjoyable  ..  We have Heine who is half the size of an average man ( child looking and cute) he is the Royal tutor to the 4 very gorgeous princes , kai ( first expressions cold , later we see he actually really sweet and mischaracterized)  , Bruno ( smart pants ) , Leonhard (tsundere) & licht (an absolute flirt ) who's personalities all differ.. they have personal reasons of why they each disliked their  previous teachers but heine has made it clear he will build a trust and teach them what the others couldn't ... Questions that you ask yourself who is Heine ? What's his past and who the hell is the older brother  So for the sound and animation I think it's done brilliantly, gorgeous and Sharp and pretty detailes with the hair and eyes ( which in my opinion is what usually draws me in more )  .. catchy OP and ED ...  But seriously dudes this is just my personal opinion I defiantly suggest giving this a go

Cheesy, and cliche, nevertheless I found myself enjoying this short comedic series, The Royal Tutor. The real question is why? Honestly it shouldn't take long to review, as this show presents simple goals and fulfills them in a satisfactory manner. Story 7/10: The story is nothing new, a tutor (Heine) comes to teach 4 princes with a bad reputation for scaring off tutors, they don't like him at first, then they come to respect and like him. There's a few episodes for each prince to get their charater fleshed out, etc. etc. the last arc is the MC getting his past fleshed out, the end.  The point of this story is 65% comedy with 35% of people improving as people, better suited to be 'king'. Could be titled the 'misadventures of the royal tutor as he teaches princes 1-4 life lessons'. Despite the simplicity of it all, I thought it accomplished and tied up what the show set out to be from the start. The princes all become better people by the end of their arc, the MC does not show any progress really. They are set as the 'perfect mentor', an 'op charater' so to speak. They are also the driving force for the princes to make a change in their way of thinking. Another aspect I enjoyed was a slight mixing of the 4 princes in many scenes. I wasn't great meshing, but in shows like these one can expect the charater arcs to leave out the other princes for another day so just one can be focused on. Leaving out complexity of any relationships when they are in a group. This did happen, but not to the extent I was expecting, near the start, in between and at the end the princes did have a quite a few scenes of interaction with eachother. For what the show was trying to go for, they did an ok job. There was changing in settings along the way, and overall the main goals were accomplished with the end of the series wrapping up perfectly with the MC's past revealed. Some schemeing and drama dashed in here and there. So, while I found the plot slightly boring, I also found it satisfying enough for the purpose of the story itself. Animation 9/10: I noticed some drawings of characters was slightly odd and sloppy at times, when other times it was eye candy. In general, the backgrounds and scenery definately had an air of 'royalty' and was well done and a bit complex at times.  Sound 8.5/10:  A few instrumental pieces that fit well with the theme of 'royalty', opening and ending themes were ok.  Charaters 7.5/10: Here's where I enjoyed the show. Ultimately I like the internal monologues of the MC the most. They were expressionless, blunt, and truthful at all times, as well as sarcastic towards the princes many times. The type of apathetic dead beat humor that I really enjoy, while also being perfect at academics and martial arts... Seeing Heine take everything dead serious and transform into a silly little chibi was entertaining. If, say, a girl/boy that had no idea what they was doing was switched for the MC, I would have found the show far too trite, so having it be Heine's charater type is important. The other charaters consisted of a King, who was very king-y, the prince that was incredicbly stupid but good at sports, the prince who looked scary (had weird hair my least fav.) but is actually super kind, playboy prince, and booksmart prince. Because of additional personality traits and time dedicated to them, while each of their 'stories' in the show was completely predictable, I didn't find them overly 2D or boring. Coupled with a bit of comedy and lenghty explainations from Heine, it was pretty enjoyable to watch.  Overall 7.5/10:  Can't say it was boring enough or poor for a 7(close though), but not really original enough in anyway for an 8.  This show wanted to have a tutor teaching some princes life lessons in a comedic way, and it accomplished it in a way not completely dull. Albeit I enjoyed watching it but I couldn't always be in the right mood to do so. There was just enough seriousness that I was kept watching, though any plot that unfolded was rather cheesy. Still, the animation was nice, and I ended up enjoying it more than I expected. I would recommend to those who want a bit of princely eyecandy, a stone faced MC with interal dialogue and a bit of comedy, and a bit of the setting of being in a royal palace.

The Royal Tutor is the most insightful anime I watched because it taught me so many valuable life lessons. The main character: Heine has a very wise, caring, and insightful personality. He gives the princes precious advice on how to interact with others, and fix the princes' shortcomings.  For example, Heine once said: "because you know your weaknesses you hold a higher standard. Those who recognize their vulnerability can be kind and sensitive to others." Heine not only pays attention to the princes' interests and personalities. He also finds a way to appeal to the princes, and motivate the princes to do their best. He is not an ordinary tutor. He is very tolerant of the princes. He tries to understand the princes for their true selves and doesn't base his judgement on rumors. His kind and caring personality helps the princes overcome their weaknesses. For example, Kai is very awkward with people outside his family. Heine teaches Kai how to be polite and respectful of others outside the royal family.  In my opinion, Heine is the perfect tutor for the princes because he is very mature, and understanding. Bruno is the prince that respects him the most, and calls him "master". I believe he is the perfect tutor because he truly tries to be patient, and cares for the princes.  The character designs are very attractive, and detailed. Their beautiful shiny hair looks glossy and neat. Although the anime can be cliche, and generic. I truly believe that the anime had a lot of significant quotes that are relatable, and wise. 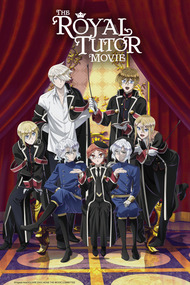 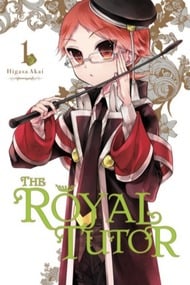