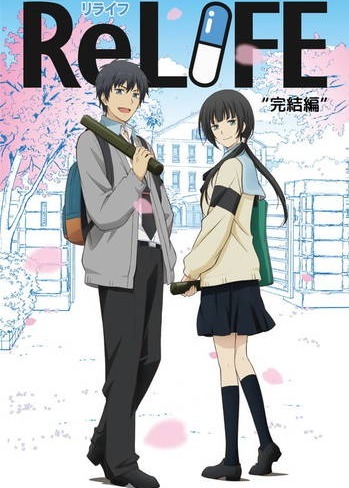 This OVA was great and i highly recomend it if you have seen Relife. i wasnt quite satisfide with the ending of the main anime series however this OVA added on perfectly! It gave an ending i was really hoping for and it was amazing! Most animes sadly don't go into depth after the main plot even though they should but this added just enough onto the story that i think they ended this perfectly! :D

Alright, this will be a little different review since the subject matter is an OVA (basically an added episode of the series if you're new to anime) of the series ReLIFE.

So let's start with the most important part - the story!

It's pretty decent for an OVA. What I liked is the studio didn't just pack one episode with as much plot points as possible to get rid of loose ends. Nope. What they did is a mini-series that give the viewer a satisfying ending to the story.

On a less technical note: the story ends well. Its a little bittersweet a little funny and a little heartwarming. Basically, if you cant do another season of the series and you want to finish it as well as possible - this is how it should be done.

As in the original series, the animation is pretty good. I especially like the manga-like additions of characters perspective on the situation  (where the situation is drawn in an overly simplistic way to hit the point of the scene better) in comedy sequences.

The sound is ok. There's not much more to add to it.

The characters, just like in the original series, is where the show shines. They're likable, relatable and you want to see them grow and change (and they do). More importantly, the story arc that the main protagonist goes through and the way he is feeling towards everyone eventually forgetting him is masterfully done.

The side characters get a little time to shine too. We did get them introduced in the first season pretty well, the story has given us reasons to understand and/or like them and the OVA takes some time to show us what happens to them too. I also liked the way the story deals with characters forgetting the main protagonist without his adventures with them being kind of pointless.

Verdict: Its a great ending to a great (albeit little short) series. Go watch it already!

I wasn't a huge fan of anime .... my friends told me to give it a try .my gosh !! it was really a great experience of my life  to watch this anime . the producing team really did a great job . Everything was perfect from story ,animations,sounds and characters . Basically it is a slice of life with lots of inner- romance and comedy and also with important lessons of life .i would like to appreciate the re-life teams for their precious effort to entertain us ....... i would specially recommend my friends to watch this anime ...

The whole careful who you accept drugs from caution tale amps up in season 2.

Rena and Ooga’s relationship is going along swimmingly until things get rocky in the form of another NEET. Que Kaizaki’s life experience advice.

Contemplating being involved with classmates [class photo, becoming friends, going on a date, ect.] when memories will be erased remains consistent.

The fixation on adult in teen body fearing they're crushing on a teen also gets more focus and becomes something the audience should probably be concerned about as well.

A love confession early on may make some squeal, others melancholy, and some on edge about the reply. - this reviewer fell into the later category.

If you made it through the first season than 4 more eps to find out how the ReLIFE program impacted Kaizaki is worth the time.

Ending of the series after the 1st season. Yep, it was short, but the anime covered most of the manga, anyway.

I really like this series. Event thought the OVA omitted many scene from the source, it's still enjoyable and able to potrait the overall story. For non manga reader maybe they will not realize the different. for throught out review maybe i will show it at my site someday at has-mag.com

What do I have so say. The first season really only shined on Hishiro and Kaizaki romance on the last few episodes which is fine, but I wish they did not have to kind of rush it in to 4 episodes, but I still loved the OVA and 1 season. I really enjoyed everything though. I jsut really enjoyed the anime and really am glad that they met at the end and HOPEFULLY they get married. I just am sad that this anime is over since I really enjoyed it. Thats all I have to say.

I feel like many people might ignore the OVA after the somewhat dissapointing end of season 1 ending. This is mainly because the core 13 episodes left us with no closure whatsoever. I honestly might be over-ratting the OVA as I am not in any way a real critic with the savvyness of anime; however, from the perspective of a fan that would love to see closure to series that is much touching, I really do believe it provides with the right execution of a closure that is within the grasp of the producers. I admit that the series as overall deserves a full fledge season where a lot of characters building is deserved but juedging from just the perspective of what the OVA delivered to the overall story it is a 10... maybe a 9 overall. I don't dismiss that there are still many questions left answered but if I am able to get some closure with enough space for my own imagination, I would say hats off. Therefore, for whoever felt in love with the original 13 episodes and need some closure, I really recommend you to take this additional 1hr (minus intro and outro songs) to watch the OVA. You will feel much more satistified with the overall story.

The OVA raps up the ending greatly and leves you with no real questions or emotional cliffhangers.

Without the OVA the ending is BLAH but with it the story comes together 10x better and leaves you with a show that you will surly remember and love.

I don’t want to say much more because spoilers but if you watched and loved the main story the OVA is a must and I highly recommend it!

Thank you to everyone that helped to create this show it was amazing :)