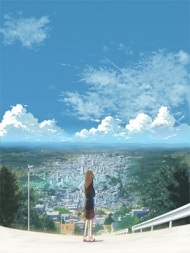 Looking back on her childhood, a girl reminisces about her first love. She recalls the many different facets of their relationship, from the joy of walking home together to the pain of school splitting them apart. As all the pieces of her story come together, she discusses love gained, love lost, and how one boy defined her life for years to come.

935 users are tracking this. Log in to see stats.

StoryChair! Plant! Telephone pole, shoe, chalkboard! By your randomness combined, I am Meguriau Sekai! Before you get any ideas, Meguriau Sekai isn’t some spastic comedy anime – it’s a Shinkai-inspired romance. I think. Actually, I have no idea what the hell it is; I just know that for fifteen minutes there were a bunch of unrelated pictures all over my screen, and that some girl was talking about some boy and the sky. Oh, and when she mentioned the sky there were pictures of clouds. Sometimes with birds, too! And airplanes. I like airplanes.   I guess somewhere in all the clutter of railroad crossings and windmills a romance story was supposed to exist, but it’s really hard to tell. The boy seemed to randomly obtain and lose his eyes from scene to scene, but when they were shown present all he did was stare at a nearby stationary structure – usually a wall or some other magnanimously boring fixed object. He certainly never looked at her, which is perhaps why she randomly started crying somewhere around the halfway point. Not that I blame him, of course, since I’d find such things entertaining too if all my girlfriend did was talk about “the other side of the sky.” Or maybe she was crying that they broke up due to her creepy obsession with both him and strange metaphors. I suppose nobody will ever know, since all the narration that followed was accompanied by distracting pictures of clocks and dandelions. Oh well, they were a horrible couple anyway.AnimationWait, what animation?  I didn’t know sequenced pictures of houses and books and trees and plastic bags counted as animation. But hey, at least the folks responsible for the visuals were smart enough to realize that linking together related still frames can simulate motion! I do believe, at certain times, they managed to have a character wave a hand or something by looping five frames for a quarter of a minute. Technological progress at its peak, I tell you. I wonder where we’ll be in 20 years.SoundDid you know music and speaking can’t coincide? I wish country music would get the memo, too.   All in all, my only complaint is that the random pictures were not accompanied by random sounds. How awesome would it have been to have racecar noises playing while showing an out-of-the-blue image of a ceiling tile?Characters“I am so lonely and afraid, but I believe in the world! I will become strong so I don’t hate the world. I want to love the world!” IS THAT YOU, SHINJI? Why are you narrating Meguriau Sekai, and why is the dialogue that bad?OverallDear Lord. Now I know what it’d be like if Beyond the Clouds, Evangelion, and Kimi ga Nozomu Eien had a love affair and made a bastard child.