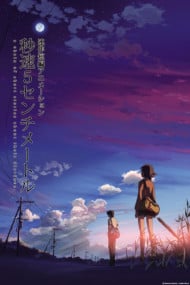 StoryWith 5 Centimeters per Second, Shinkai Makoto has polished the elements that made his previous anime so heartbreakingly poignant and produced a wonderful work. If the film did not have a disappointing third arc, this would be his best work thus far and probably the best of the year. 5 cm’s story will feel warmly familiar to those who have already had the pleasure of watching the director’s work. Makoto is still very much obsessed with capturing the sheer, unrivaled beauty of an impossible love. No matter how cruelly fate intervenes, his protagonists cling desperately and determinedly to their love, as if it were a lone piece of driftwood amidst an angry and roiling ocean. These themes are no less powerful here than they were when Makoto first explored them, and should strike a chord in all but the most hyperactive viewers. While 5 cm foregoes the science-fiction elements that Makoto is usually known for, the down-to-earth, slice-of-life story is never boring. If Makoto’s first two major stories had anything wrong with them at all, it was that Voices of a Distant Star was too simplistic and The Place Promised in Our Early Days had too much excess baggage. In 5 cm, however, Makoto finds the perfect mix; the film manages to be wonderfully rich without having a trace of unnecessary plotting. For the first two parts of the film, 5 cm meets and even exceeds Makoto’s former material. Only the third and decidedly imperfect act prevents me from scoring 5 cm as highly as Makoto’s first two works. Sadly, I can’t help but believe that Makoto ran out of either time or funding, because the final arc is rushed and sloppy. For one, the episode makes a key mistake of introducing a new character and then doing almost nothing with her. Even more disastrously, the haphazard pacing actually serves to undermine the message that I think Makoto is going for. As a result, the final product feels positively amputated. As a whole, however, 5 cm is still a heartrendingly powerful work. As Makoto continues to release these somber masterpieces, the fact that they must be partially autobiographical becomes increasingly clear. Makoto’s raw and heartbreaking material feels so personal and intimate that he could only be drawing from his own bittersweet memory.AnimationWhen I reviewed The Place Promised in Our Early Days several years ago, I said that the movie had the best animation that I had ever seen up to that point, and that the visuals would not likely be surpassed for some time. Well, I seem to have been mistaken; Makoto’s new visual masterpiece surpasses even his own monumental work. Many will recognize the numerous similarities in style between 5 cm and Makoto's other works. In particular, 5 cm’s power lines, gorgeous portraits of cloudy skies, and ubiquitous use of lighting to set the mood will feel extremely familiar. However, while the two film’s visuals are similar, everything that made The Place Promised in Our Early Days so impressive has been improved to the point of near perfection. There is an added level of detail here in 5 cm that will raise the bar on every anime released after it. I've been been suspecting this for some time, but 5 cm utterly proves that Makoto is the best in the world at animating light. No one else even comes close. This uncanny ability allows Makoto to draw beauty from even the most mundane scenes. Most anime directors need to use fantastic, action-filled scenes to excite the audience. Makoto, on the other hand, can amaze us with nothing more than a boy sitting alone in an ordinary Japanese train. He’s just that good.SoundFor the most part, the soundtrack is excellent. For one, the quiet, understated instrumental music fits the somber and contemplative mood of the story well. There’s also a fairly good and completely unexpected JPop song near the end. The extremely emotional tune is completely different from the rest of the soundtrack, and jerks the audience out of wistful reverie and into active grief (a similar tactic was used in Pale Cocoon). The song somewhat eases the lack of a satisfying ending, although it's still certainly no substitute. Additionally, the film’s urban sound effects are so universally excellent that I actually noticed them as I was watching the show. The sounds of the train system that the protagonist rides in the first part are particularly immersive.CharactersLike in Makoto’s other works, the characters are essentially blank slates. They have no defining characteristics, and have only a minimal amount of development. Thus, many might criticize 5 cm’s characters as shallow and unmemorable. However, the lack of development gives the events an undeniably universal feel. Since the characters are so undefined, empathizing with what happens to them becomes extremely easy. As a result the film feels much more personal than if the characters had been more unique. I will complain, however, about the character introduced in the final arc. The story does almost nothing with her, and as a result she feels unnecessary and superfluous.OverallWhile not perfect, 5 cm is still a fantastic film. The animation is easily the best of the year (the only other anime that even comes close is Paprika), and the timeless themes of love and regret are achingly universal. While action junkies should probably look elsewhere, I'd recommend the film to almost everyone else.

If you're looking for some feels, hop aboard this train.  Story: This story is split into several parts. The first is a story of two school children who become friends and then find out that they will be moving apart. Later, they decide to meet up. If the story had stopped there, it would have been the perfect anime. But, no, the story shifts to another story... and then another... and granted, it all follows the same characters, but it's too much to really fit into one movie. The story drags on, and doesn't really resolve itself in a satisfactory way.  Animation: CoMix is known for scene porn anime. Look at the background, isn't it pretty? The animation is pretty fluid, but I felt this particular anime was dull compared to other anime by the same company.  Sound: I don't really have much to say about the sound. It fits well with the anime, and there werent' any parts where I felt the sound was too far removed from the plotline. (Like snazzy jazz in a sad scene or something like that) Characters: Again, had the story stopped after the first section, I would have thought this anime was perfect. But it introduced characters that I really couldn't connect with in the second and third parts.  Overall: It was ok. Not great, but ok. 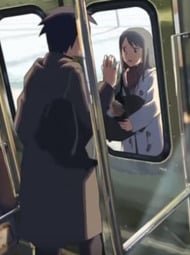 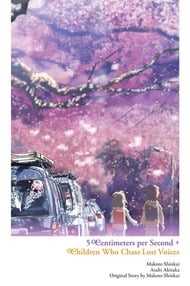 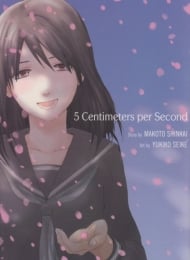 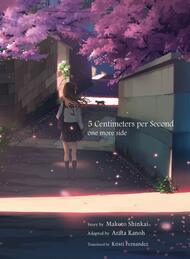 5 Centimeters per Second: one more side (Light Novel)