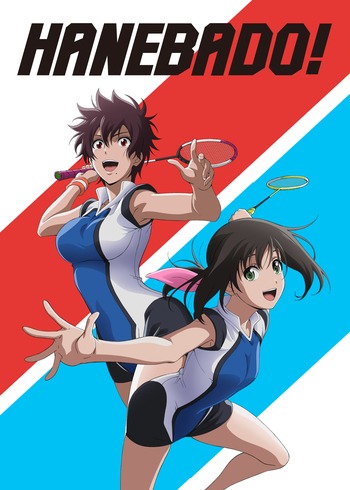 sporty angst bitches. haikyuu is such a good anime it's kinda long so i understand if ur putting it off but GO WATCH IT. i met some of my besties through that show and the fandom is peaceful unlike a lot of others. i ain't sure if hanebado is a lot like it but ! sports and teen angst ?? sounds about right.

If you like Hanebado so far, you should definitly check out other sports anime. Many people dislike sports animes for some reason, but if you like them, Haikyuu is a good one.

If you like Hanebado so far, you should definitly check out other sports anime. Many people dislike sports animes for some reason, but if you like them, Haijime no Ippo is a good one.

If you like Hanebado so far, you should definitly check out other sports anime. Many people dislike sports animes for some reason, but if you like them, Kuroko no Basket is a good one.

The story follows Ryō Mizushima, who joined his middle school's badminton team full of motivation — but without a proper coach, ended up in obscurity. Nevertheless, he did eventually reach the prefectural tournament on his physical strength. Now he joins the prestigious Yokohama-Minato High School's badminton team under the legendary coach Ebihara and is surrounded by talented teammates. He strives to become a top athlete and take his high school team to the inter-high tournament.

Mikoto Shiratori is a childhood prodigy at badminton, but who never recovered from a major loss during a high school competition. Now, he works in the sales department of the Sunlight Beverage company, playing badminton on the side.