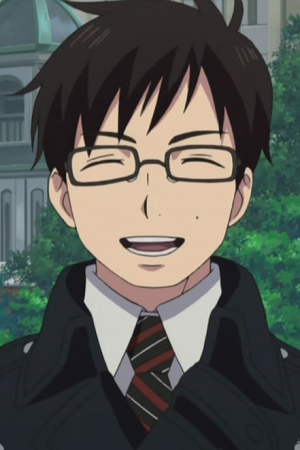 HKBattōsai's real name is Mike and if he was a real anime character on Anime-Planet, he would look similar to Yukio OKUMURA from Blue Exorcist. Just add a beard and slightly receding hairline.

here on Anime-Planet. He is an advocate and upholder of the Anime-Planet Code of Coduct. The remainder of his actual bio can be found starting at the ~Introduction~ section below.

❄️Winter❄️ 2021 [STILL continued due to laziness]
Back Arrow
So I'm a Spider, So What?

こんにちは (Konnichi'wa) everyone! I am HKBattōsai (HKBattousai). Welcome to my Anime-Planet (A-P) bio page! After many years of utilizing this site for anime reviews, ratings, recommendations, and more, I finally decided to officially join the community.

I first started watching anime in the late 1990's when I was still in high school. I have always been into Japanese history and culture, but even more so since anime.

When I got to college I met a girl and the rest is history. However, it was not until a few years later that I truly introduced her to anime. For the longest time it really was not her thing, but not anymore! Ironically, I feel like she watches more anime than I do sometimes! Plus, somewhere around 2010 I discovered Rightstuf and that forever changed the amount of our anime consumption exponentially!

My favorite anime of all time is Rurouni Kenshin. It is not the best anime I have seen but it is certainly awesome. Shinta, err, Kenshin's character is an excellent combination of humor, wisdom, courage, seriousness, and deadliness. His Hiten Mitsurugi-ryuu is amazing and is the best fictional sword technique in my opinion.

My A-P anime and manga history include series and movies from 2010 to now, which is the time I really got my wife into anime. I am leaving a few series and movies off my lists because they were watched many years prior, where only watched partially and I cannot remember where I stopped with them, or I missed a few episodes in between. Some examples of pre-2010 anime include Dragon Ball, Dragon Ball Z, Yu Yu Hakusho, Tenchi Muyo! Ryo-Ohki, Rurouni Kenshin (first watch), Outlaw Star, Monster Rancher, Sailor Moon and Vampire Hunter D. They were the most common and popular anime shows that were available on TV at the time in the United States. The same applies to manga as well.

When looking at my ratings there are a few things you need to know. First, the ratings are primarily based on how much I am entertained by the anime/manga. Plot and characters can have the biggest impact on the entertainment value, although, a weaker story can be more forgivable if there are excellent, relatable, and well-defined characters in it. Art, animation, sound (music and effects), and voice acting can affect my ratings to a lesser degree.

Second, some of the ratings are given from when I saw the anime a LONG time ago, which means that a few of them may (or may not) fluctuate in score if I re-watch them again.

Third, many of my ratings will average out “3” or higher because I try hard to find anime that is of greater interest to me and higher overall quality. Online sources like the Nihon Review (no longer maintained), Anime News Network, THEM Anime, Anime-Evo, and most of all, the A-P community help me to accomplish this; the opinions, ideas, and expressions of our community of anime and manga fans is fantastic! However, I can make a poor choice from time to time, including anime I put on in the background, or get stuck watching something I would not have necessarily chosen on my own.

Forth, all anime given a star rating has had at least two episodes watched (and typically more than that) with very few exceptions to that rule, such as movies, single episode OVA's, etc. If an anime has not drawn any interest after two episodes, then it will go on my Dropped list unless I have heard from other viewers/reviewers that it gets significantly better later on. If it is in my Dropped list without a ⭐ rating, then it does not meet that criteria. There are very few anime that I Won't Watch or at least consider attempting.

Lastly, here is a relatively simple guide to what my ratings mean:

Side Note:  Do your best to never overhype any anime or manga. Otherwise, you decrease the chance of truly enjoying it to at its fullest since you may be hyper-critical about everything. That is just my opinion and a suggestion.

I do write reviews for certain anime and manga, more so since April 2019. Here they are below, if interested. Constructive criticism is always welcomed and appreciated. Lastly, a superscript (¹) denotes an old review that does not have the added Achievement Score. Please see "♛♕ Special Profile Updates ♕♛" just below the "📝 My Manga Reviews 📝" for additional details.

🆕 October 2018:  All reviews have been updated to include the Entertainment Score (anime) and Enjoyment Score (manga) as part of the Overall score calculation.

🆕 July 2019:  Retroacting to the start of 2019, I am personally classifying an anime series as consisting of five or more episodes and being 120 or more minutes in total length. This will affect select anime placement on certain custom lists I have. The only exceptions to this rule are when an anime is still listed as a "TV" series, such as I Can't Understand What My Husband is Saying, or an anime like Castlevania since the first season is the only one falling short of the criteria.

🆕 July 2019:  Another couple of changes are being made to the Anime reviews. First, I will be including a suggested Age Rating based upon my own opinion. Second, I am now including an Achievement Score, which has the potential to impact the Overall score. The first review to feature this is Myriad Colors Phantom World. Here is the breakdown:

🆕 August 2020:  I continuously attempt to refine my review scoring system to create as accurate a review as I can possibly write. Beginning on August 1, 2020, two significant changes are being made to my reviews. First, all future ones will consist of a weighted average system, thanks to my recent review of No-Rin. Second, all past reviews will be updated to the weighted average system. A superscript (¹) next to them means they do not contain an Achievement Score. A superscript (²) next to them means that they originally have an Achievement Score that has been recalculated to the new system.

The review categories will account for the following weighted percentage points: 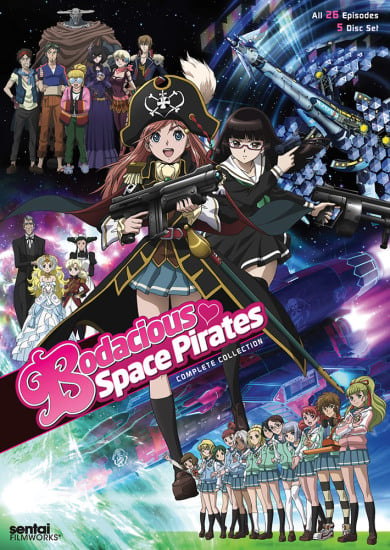 Most episodes watched in one sitting (most recent listed first):

Most episodes watched from complete anime including TV, Web, Specials, Other, and OVA in one year (Dropped or Stalled anime is not included):

Most episodes watched from any completed anime (TV, Web, OVA, Movie, etc.) in one year by KarinXOXO (Dropped or Stalled anime is not included):

Most new anime series/seasons watched in one calendar year:  55 (2019)

Most new anime series/seasons watched in one calendar year with KarinXOXO:  17 (2020)

Most episodes watched in a single calendar day:

Check them all out. They're what makes A-P awesome!

I want to share a little more about myself by making this a part of my bio page, while not taking away from all that is anime and manga. I have many other interests/hobbies and always open to trying new things. I am a former musician who once played the piano, guitar, and drums, with the latter being the longest at more than 12 years. My favorite drummer is Danny Carey. Music is probably one of the very few things that is more important to me than anime. My favorite artist is Tool and my favorite genre is progressive rock/metal.

I am a former athlete and thoroughly enjoy sports in general. My favorite sport is Baseball. The New York Yankees are my favorite team and my all-time favorite player is Tino Martinez.

Another thing I want to share about myself is my video gaming life. I've noticed LOTS of A-P users are also big time gamers. In fact, many of my A-P friends are definitely into gaming. Here is my list of all-time favorites games (gaming system), with the top five being in order:

That's it! I used to have more listed, but decided that I was getting carried away with all things me that are not anime and manga.

Support anime-planet! There are a number of different ways to do so. Click >here< to find out how. If interested in supporting A-P by greeting new members to the site, please go >here< for the new WECO information page. It's a no brainer!

My own personal way of supporting A-P is being a

for over three years (August 2017-). What does that mean? For me specifically it means that I am co-responsible for making sure People and Characters are added and updated accurately and appropriately. New seasonal anime I was/am directly responsible for while they were/are currently airing:

Newer A-P Members:  Please feel free to ask me for anything, or just go >here< if you need assistance of any kind. Other than asking any seasoned A-P member it's probably the best place to go.

Thanks for checking out my bio page on A-P! I am open to comments and suggestions any time. If any one does message me on my profile I will respond back. Someone takes the time to do so, then it's only polite for me to reciprocate. You can find me on the forum >here< as well.

Lastly, for anyone who wants to chat and get to know me and other people on A-P more, I have a small community of anime, manga, and gaming fans on my own Discord server. Just message me on the A-P forum >here< and I can send you a link to it. さようなら (Sayōnara)!

This is spirit animal the nostalgia critic has 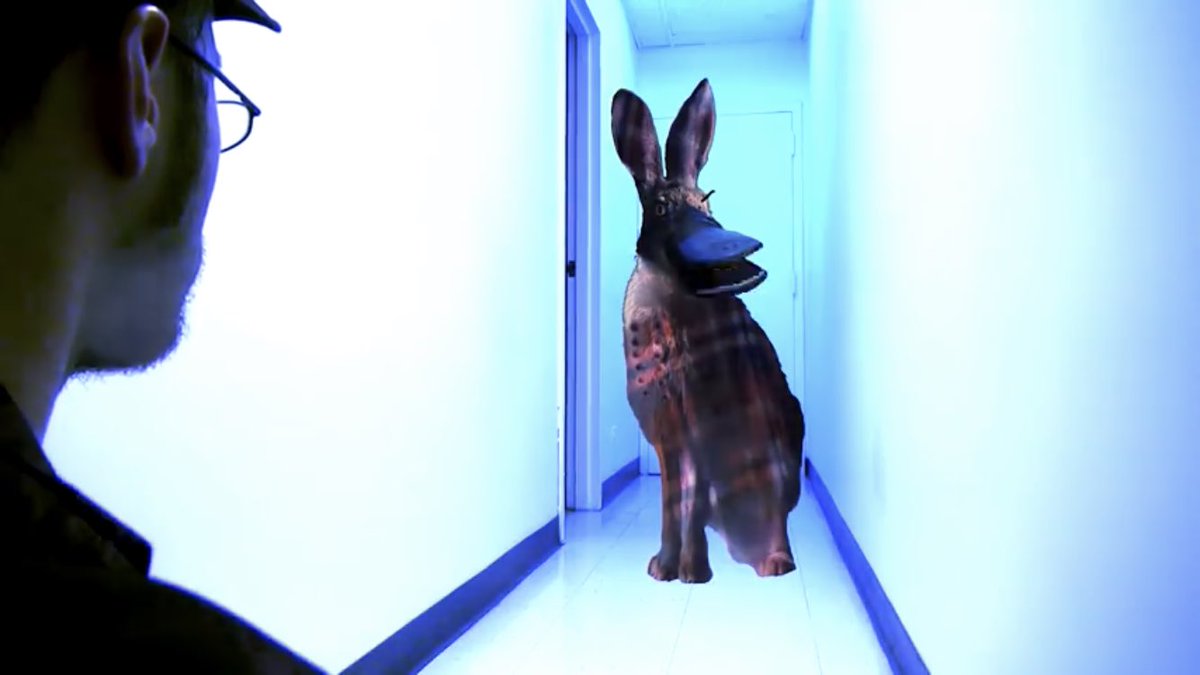 I hope you like it i am really proud of it