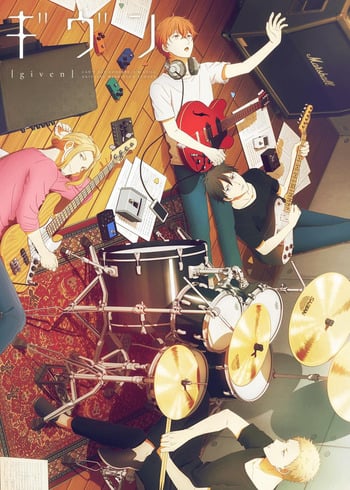 Mafuyu tells Ritsuka that he likes him and Ritsuka is ecstatic to find out that they both like each other but at the same time, he remembers himself saying that band members should never bring relationships into the band. However, they both decide to talk to Haruki and Akihiko about it. Haruki gives them a lecture and Akihiko congratulates them. Meanwhile, Haruki, who likes Akihiko...

Boys in the Band

Time Is Running Out

Anime-Planet users recommend these anime for fans of Given. All available to watch right here, right now!

Both of these animes have similar concepts and plots. In orange, the protagonist suffers a heavy loss of someone they were close with due to suicide. In Given, the protagonist also loses someone close to them because of suicide. In both these animes, the characters have many similarities, such as having a deep backstory and meeting new people that help them overcome their sadness and problems.

Blessed with a beautiful voice, Nino only sings for one reason: to be found. Nino finds herself looking for two boys who left her without reason, Momo and Yuzu. By chance, all three of them end up in the same high school, and Nino discovers that her singing isn't in vain. As they rediscover their bonds, the group realizes that time changes many things, and...

If you like Given you would appreciate Fuuka. It is a nice break from serious manner of Given. The reason of my recomendation is similiar theme, music/band. This story starts a bit awkwardly, but it will sure grow on you as Given grew onto me. It's not BL like this one, but i can guarantee that you will not regret watching it! Nothing extra serous happens, chill storyline. Maybe you can relate to some character like I did. It is not like fantasy love novel thing and I like it is like regural life inspirated artwork.