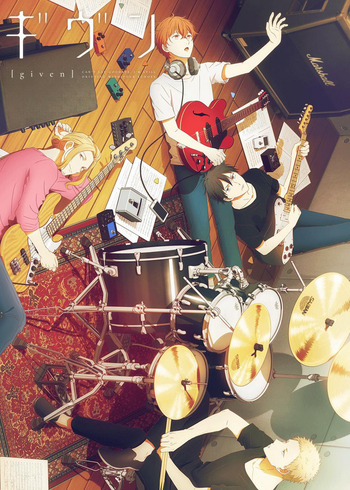 Given is 2019’s dark horse. It’s a title that has been slept on for its subject matter instead of appreciated for its prowess. Unlike Bloom Into You which received a major backing over the course of its run, Given seems to have received little fanfare within the community despite the praise most viewers have for it. I wouldn’t call it amazing, but it certainly does resonate, much like a good tune.

The tunes in this show are very solid. There are several fun jam sessions where the main band of the show plays some delicious math rock, and there are several background tracks that also have some guitar in them. The opening, “Kizuato” by Centimilimental is another emotional banger of a rock song, only beaten out by the stellar insert track in the 9th episode. Said track is also one of the biggest emotional payoffs in this show.

Given has a very delicate sense of drama. It’s more than happy to interrupt its melancholic vibe with a comedic tone shift, which can get annoying even when the joke lands. Regardless, the tone can still get heavy without being overbearing. There are some matters regarding a critical plot point that feel unclear, somewhat undercutting even the best moments in the show, but the show is generally well-written and emotionally resonant. The way it handles its gay characters and their drama is mostly solid. Much like last year’s queer hit, Bloom Into You, this show tackles gayness in several angles. It’s doesn’t explore as many avenues, but it does show off several struggles when it comes to gay relationships, especially regarding one that ends in tragedy. The character interactions are just as adorable, especially whenever Uenoyama, the main protagonist and resident male tsundere, gets embarrassed. There’s quite a lot of jokes revolving around characters making quick jabs or getting flustered, and they’re priceless. For a show that’s melancholic, it can be quite hilarious.

The character interactions and personalities are why the humor can land in a show this delicate and forlorn. Uenoyama as almost as dorky as Mafuyu, who borders on being a space cadet lost in his own thoughts as he gazes blankly at nothing. The other two members in the band are Haruki and Akihiko, and their dynamic is also pretty entertaining. The former is just as easily flustered as Uenoyama is, and the latter is somehow the laxest of the bunch as he acts as the one guiding everyone along and holding everyone together. Their individual stories of romance are also treated tastefully for the most part. Some of the monologuing can get pretty bad in the show, and some of the monologues of the gay thoughts can get...a tad excessive to the point of tastelessness, to put it frankly. Thankfully, they never last too long, and the actual relationships are cute regardless. The story arcs regarding certain side characters also lead to some memorable character moments, like with the girl who likes Uenoyama. There is quite a lot of chemistry and sensible drama with these characters, which always makes for a good cast. It makes the moments where the string snaps and critical information gets revealed all the more impactful, with some brutal cliffhangers. The emotional core of the show, Sato’s character arc, is rife with these moments. Still, I do wish there was a bit more exploration regarding certain characters, but I assume that’s what the source material is for.

I also wish the production values weren’t so mediocre. Lerche isn’t known for any visually stunning titles per se, but it still pains me to see a good show be brought down by lackluster production values. There’s an egregious amount of CGI, including the instruments, the environment, and the big performance the characters have. On top of that, characters often have these strange red outlines that stick out like a sore thumb. There isn’t a ton of animation in general either, and the direction has but a few brief moments to stand out. There are also a disturbing number of moments where characters just don’t have faces. There are even more moments where Given turns into a slideshow. Almost every episode has a moment where the show resorts to having still frame montages. The general art style and character designs are nice and expressive, so some of the gags have an extra punch to them. However, that doesn’t excuse weak production values.

Ultimately, while not quite the great emotional gay drama that Bloom Into You was, Given is a delicate and adorable sleeper hit of the year. It sings from the heart, and while there are some hiccups that are plain for everyone to see, it’s still a resonant title and one of the year’s best. If you want a good BL anime, a worthwhile drama, or even just an excuse to hear some nice math rock in a TV show, Given is probably up your alley.

Oh, and the EDs were alright too.

Written and Edited by: CodeBlazeFate
Proofread by: Peregrine

I was hesitant to watch this anime because the storyline is about a band but after watching the first couple episodes I fell in love. This anime is a masterpiece and the romance in it is to die for. I highly recommend this anime

Seriously everything about this anime is amazing, I really love this anime. The plot is great, each characters background is great and talks about many different emotions that some people in reality might feel or plots that they gone through. Its one of the best bl I've ever seen in my life, not too sexual and has more soft moments. The anime not just focuses on bl but also focuses on other things such as the characters' passion for music. Also each character has great relationship with each other. Cannot wait for the movie in 2020.

this anime is one of those that just hit you real hard, it's also like giving you a slice of life, with dark matters some may relate with and its really good at portraying that. The animation like bro how tf its one of the best i've seen in a while it kinda gives me your lie in april vibes but in its own way ngl this anime has beat any ive watched.

(spoiler free review) this was such a good show. The developing romance between the 2 mc's was the cutest thing ever. This is definitely one that girls can appreciate cuz its just so cute! (plus most of the characters r eye candy). The best thing about this show is it doesnt push the shonen ai thing in a weird way. It just developed as a normal romance which is nice to see. It was so precious. This anime hit me in the feels (i cried like a baby) & i recommend it for romance, music & shojo fans