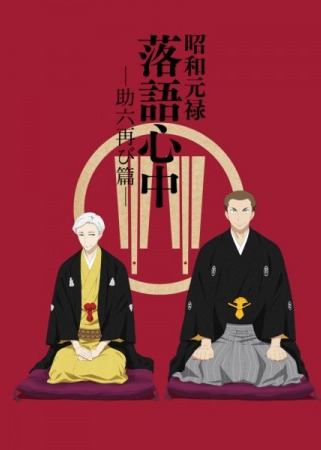 If you're looking for anime similar to Descending Stories: Shouwa Genroku Rakugo Shinjuu, you might like these titles.

Both shows focus on the old style of Japanese story telling. Shouwa focuses on the story telling part of the stories with one person, where Kabukibu is more of a play with a cast of people. But both share the joys of a preformance with people who are passionate about the stories they tell. Kabukibu focuses on high school club where Shouwa has a grander story to be told over all and focues on adults for the most part. Check one out if you enjoyed the other for sure.

Marii, Kigurumi, Tetora, Gankyou and Kukuru are five young women with completely different interests and personalities, but there's one thing that they all share: performing Rakugo, a unique form of Japanese comic theatre in which a single artist sits in front of an audience and tells an entire story, portraying multiple characters solely through changes of voice and minimal movements. It's a challenging art but all five of our leading ladies are determined to become the best they can… and in the meantime, they find themselves hanging out together, both at the Rakugo theater and around town. And they also have a shared acquaintance, a mysterious stranger who's always wearing a wrestling mask! What's that about?

The Rakugo story of PARROT is told by a Rakugo-ka, or a lone storyteller formed of Japanese characters.

The film is based on Ukiyodoko, a rakugo storytelling piece. Hanzo, the hero, brags to his friends to make a party go. Human nature remains unchanged once and now, as the time goes. We love meaningless conversations among boon companions. Different communication methods are visually tangled in different times, Edo and today. The theme is an “interchange between the transient and the immutable.”

Tsukishima Yui and 5 other girls were summoned into the Edo period by a mysterious stones and each one of them had a power to protect people from evil and yui's power were ''words'' her hope-giving kind words.