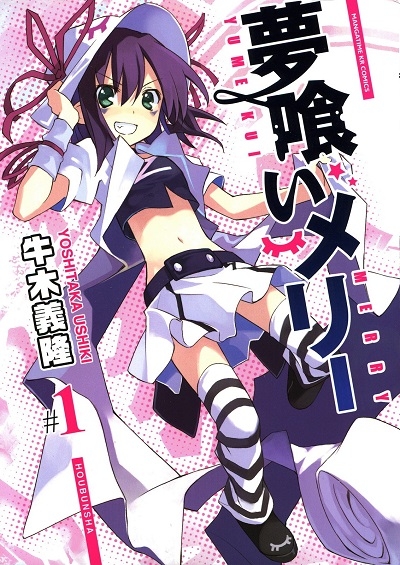 Ah, Dream Eater Merry, how you impress me with your themes and cool characters and the art that only got better over time. A monthly manga that has been running in Manga Time Kirara Forward for about a decade now, which probably isn't a well known magazine compared to Weekly shonen sunday, Weekly shonen Jump and Shonen Magazine, even though Dream Eater Merry get on the cover of the magazine a lot, making it out to be a popular series. It saddens me that I just noticed it not that long ago thanks to a club mate of mine. The point of this review is to explain why its a series worth getting into, even though its not finished, and to point out the differences beween the anime and the manga. Let it begin!

Story- The story begins when Yumeji Fujiwara begins to have the same dream over and over again, and then the dream demon Chaser John Doe makes his appearance, in an attempt to take over Yumeji's body. Not long following suit, a dream demon named Merry appears and makes the announcement that she is trying to make it back to the dream world. Merry saves Yumeji from John Doe and from there begins the long running goal to return Merry to her own world. Over the course of the series Yumeji's ability to see people's types of dream as well as the ability to enter them help push the story forward. I'd say the story really begins to pick up by chapter 26 SPOILER where its revealed that Merry really has the ability to send Dream demons back to the dream world. One of the major differences between the manga and the anime is when Hercules makes his appearance in the series. He was always meant to be a major antagonist in the series, but rather focus on that the studio gives us two filler villains that fill in story for the anime, being Mystletein and her vessel owner. To be completely honest, I am tired of the false content I had to sit through with Bleach and Naruto, so to see the original story progress with Hercules made me really happy. A few more dream demons are dealt with, allies are made with Engi and Yui and then the identity of Hercule's vessel is revealed and it blew me away. At that point I was able to confirm what type of pacing Dream Eater Merry has, and its a slow burner. The fight with Hercules is only the first major part in the series SPOILER as its revealed that there is an even bigger villain in the series who has it out for Yumeji and Merry. Given the backstory to how Yumeji and Merry actually first met each other, as well as how Yumeji got some of his dream powers, it seems more and more that the author has actually been planning the story for years and its because of this constant development that I think the series has done so well during the years its been serealized. That's why its going to feel sad when it ends.

Art- Although the art for the beginning of the series was a bit rough, it does get better with time and pretty soon the characters actually look really good. The design of the dream demons also help to personify them as characters, to give an idea of their character and of who they are. And there's so many of them, it doesn't take long to find a dream demon you like. For a fantasy series like Dream Eater Merry, of course the art should look fantastic.

Characters- I really like how the characters develop over the course of the series. like Merry trying to find her way to how Yumeji is determined to find a way to protect everyone, even if it means sacrificing himself. The characters themselves are very driven towards what they need to do, like with John Doe as he seeks the truth. All the characters succeed to some extent on making the reader think of what it means to have a dream, of what it would mean to make it come true and more. Now that I've caught up in the chapters the main characters of Dream Eater Merry feel complex to me.

Overall- Besides the fact that the series has a slow start and is a slow burner, Dream Eater Merry is a series I think is worth getting into. I remember playing music from Shiro Sagisu and it made the series feel even more epic. More than anything I can't wait to see how Yumeji and Merry's story comes to an end, so this'll be a series I'll be keeping an eye on.