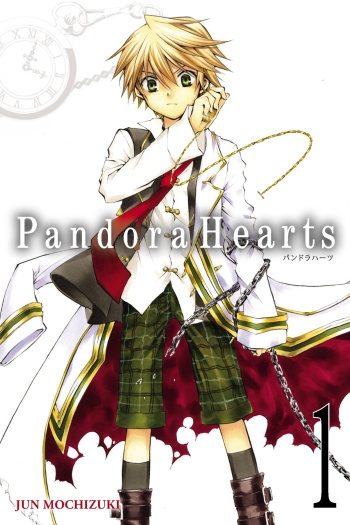 I read up to the 79th chapter, and I absolutly fell in love with the story of Pandora Hearts. The little rich boy named Oz being dragged into the abbys by a mesterious person, we find out who the person was sometime later in the manga. It started off quite funny, as Oz and Ada were exploring the mantion putting a lot of tention on the house keeper, while teazing Gilbert (servent of Oz) who was found infront of the gate leading to the Abyss that was owned by the Vessalious family.

Sometime later in Vol. 1 Oz came bck from the abyss with the power of the Black rabbit after missing for 10 years.

At first Oz, Alice and Gilbert trie to find Alices lost memories that really belongto the will of Abyss (Alices twin) while it seems that Gilbert is only helping them because his master Oz is there, but it changes after some time, when Alice is not so bothered about her memories and helps out with the pandora.

A lot later in the story (around chapter 75) Oz finds out from Jack that he is really only a plush rabbit that was made into a chain by the will of Abyss, and the body that he is now belongs to Jack Vessalious.

The thing I liked the most in pandora heats was the relation between each character. Like Break and Sharon, or Gilbert and Vincent. I liked aswell the twist that comes abouts near the end there as gilbert protects his master Oz even tough he found out who his real master is. (Just love how Gilbert is loyalto his master OZ)

One thing about pandora hearts that I hate the most is the personality of Oz!!

After I watched the anime, which was pretty good, I saw people recommending the manga. The manga had a pretty high rating and the anime left me wanting more so I read it. I read, like, 3-4 hours a day and I caught up in 3 days (my eyes really hurt). Needless to say, I really enjoyed this manga.

At Oz Vessarlius' coming-to-age ceremony, he's suddenly dragged into the Abyss for a sin he never commited. There, he manages to escape by making a contract with a Chain called Alice. The story starts out quite simple but it takes a darker twist and it gradually gets more complicated. This story also has a lot of plot twists and my reccomendation is to not like or trust any character easily, for every character has their own dark side. If there were any problems with the story, I would say that the pacing's too fast and too much information dumping. If you wish to understand the story better, I reccomend you to watch the anime prior to reading the manga. The manga has a bit more violence than the anime since it goes more into the psychological and mental state of the characters and has a more complex plot. A good thing about the manga is that it has no fillers. Every chapter contributes to the plot and so does every charcter.

The art was pretty good. The shading makes the art stand out and makes it seem dark. The covers are especially well drawn and colour oriented. The sheer simplicity of the cover has a strong effect on the viewer and actually manages to show the dark side of this manga with it's effects and dark choice of colours.

Pandora Hearts has, imo, the most likeable cast of charcters in all the anime and manga I've seen. Oz is nice and flirty but, as the story progresses, you'll feel really bad for him and the things he has been through. Gilbert was loyal and timid. When he grows older, he gradually grows more handsome and even more loyal (if that' s possible). Alice is hot-headed and violent. She does have her cute side, though. Break is a clown. A very wise clown, nontheless. That's the main cast. There's also some other secondary characters that I'm not going to mention. The charcter development is immense and most of the charcter develop. I advise you not to grow too attached to any charcters for, I have a very bad feeling that our author, Jun Mochizuki, will kill off most of our charcters by the time that this story ends. Which, by the way, I'm not sure how.

Pandora Hearts is a very thought provoking manga with some really dark twists. I immensely enjoyed it and it's my, currently, favourite manga (but that might be because that I don't reach much manga). I reccomend people who like dark storys to read it but, take it slowly beause after I marathoned it, my head really hurt.

I loved this story and I cried more than I thought I would T^T it was  just amazing it was so beautiful and the concept was so unique that ughh I just have no words to properly describe it so whoever read this review than just please give it a chance and you would understand what I'm talking about.

When I first stumbled across this, I was looking for a single character that I'd looked up on who seemed interesting (Vincent). And let me just say...I got ALOT more than what I could've ever asked for. It starts off with a boy noble named Oz, his lil sis Ada, and his servant Gilbert. They were all kinda cute both personality wise and looks. But then everything takes a sort of dark twist when Oz is sent to the Abyss for a sin, his existance. There he meets a hot headed girl named Alice (Here comes the other main character~). Together they manage to escape and return to the real world only to discover everythihng Oz knows has changed.

As far as the story goes, amazing. It starts like the typical light hearted chibi humor which is actually preytty funny sometimes. But as the story progresses, we learn more about why Oz was cast into the Abyss and get some dark themes like slaughter and even some yandere characters. I'd say from a little over halfway through the series, we get plot twist after plot twist after plot twist. The only thing that bugs me is, some of the plot twists were just plain confusing.

For characters, I'd say this was 10 out of freaking 10. ALL of the characters had some twist or quirk to them and all develop to some degree. Oz for example, doesn't keep acting all childish and gets pretty messed up due to a certain discovery. And heisn't just all smiles and laughs, he actually is kinda messed up in the head. As we get to learn the backstories, we find out how twisted some of the nicest/funniest characters actually are. I mean, even the practically perfect guy is INSANE. The thing I like best about this is that people aren't who they think they are or sometimes the light hearted characters might act with extreme violence/madness. I also loved the relationships between certain characters like Break and Sharon. You know those plot twists I mentioned earlier? A lot of them are centered around characters' identities, so don't mark anyone as anything until the end. Also, some characters do in fact die. Just a warning. And you know that 'if you're my friend's friend, then we're friends' cliche? Well, let's just say that some of the conflict between characters happened because of this isn't true by any means.

The art was amazing. All of the expressions clearly depicted the emotions of each character. And, I must say, some of the chains and scenes in the Abyss look quite horrifying. Some nightmare inducing actually (not that I had a nightmare but still pretty creepy). I love the character designs for every single character and some panels are just plain gorgeous.

Overall, 10/10. I highly recommend this to Black Butler fans, the two mangas have similar elements. A contract with a non-human being, dark themes, and character depth. I loved this manga and it's definitely one of the best I've ever read. But sadly, it's nearing the end of it's run,I think there's only 1 or 2 volumes left. And let me just say, DON'T EVER READ IT ALL STRAIGHT. YOU WILL BE SENT ON THE FEELS TRIP OF A LIFETIME!

As early as my mind recalls, I remember seeing some of the Pandora Hearts anime when I was 8 or older. Although I was young and only saw only the first episode, it clearly left an impression on me if I can still remember it. Years later, after seeing a number of anime and manga, I have finally read the series and now I wish this was one of the series I had grown up with.

Story- It is soon to be Oz Bezarius's 15 birthday and with that his coming of age ceremony. However, all is set in motion when Oz is thrown into the prison known as the Abyss. In the Abyss live lifeforms called Chains that can only live in the real world by forming a contract with a human. From there Oz meets Alice, the first Chain he runs into. Together they form a contract and make it back to the real world. They are soon recruited into the Pandora organization, who goal is to research the Abyss and the ones who threw Oz into it. Now Oz and Alice search the land in order to find Alice's memory shards to learn about the Abyss and to find a way to break the contract without killing Oz or Alice. I have to admit, it took a while for the story to pick up, but once it did it was so worth it. Pandora Hearts may be a slow burner, but its a good slow burner.

Art- Pandora Hearts has some of the best artsyle I have seen when it comes to monthly shonen series. The time it took for fans to wait for each chapter must have been worth it, cause those color spreads were lit, no wonder the magazine did so many color chapter openings, cause Jun Mochizuki knows how to draw! On another note, the author also knew how to draw gore, since the series looks especially gorgeous!

Characters- When the author knows how to develop the side characters just as well as the main characters, you know the author is doing something right. You get attached to these characters, and then before you know it you get super sad and depressed when they die unexpectedly. Mochizuki-sensei is not afraid to kill off her characters, so don't be surprised when a character you love suddenly dies. Another plus would be the well written villains. Without spoiling who the villains are, I can happily say that the villains are relatable and over time they lost their way. I love how Oz is not a perfect character, with the fact that he tries to take everything on by himself, but eventually he grows past this thanks to Gilbert. I know people are complaining about the author not focusing on any romance between Oz and Alice, but think the author was focusing more on the camaraderie between the main characters.

Overall- I was trying to read more of this series during the day, but I think I realize my mistake in doing this. There is a lot of detail with every chapter, so this is a series you can't really rush through. I was able to slow down with the series and now I can really enjoy it. This was a grand adventure that Oz and the guys went through, and it was a roller coaster of emotions. This was definitely a shonen series that gave me the feels, something I don't think happens a lot.