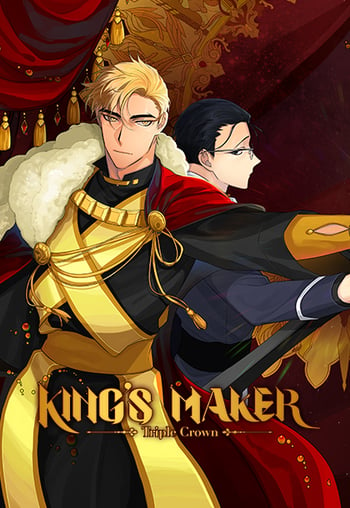 I rarely give out 10's but this story deserves it.

The characters and scenes are beautifully designed. The coloring is especially phenominal. Each character has a very distict color pallette that's also telling of their character. For example, Shin has a blue and white color pallette and is very calculating and reserved, while Wolfgang has a gold and black color pallette and is a bit more bold. When you conbine the characters in different scenes, it's absolutely a gorgeous sight to see. The artist also uses color to add emotion, such as black for frustration.

The characters are also fleshed out very well. I would recommend reading King's Maker first, because although King's Maker: Triple Crown is the "main" story, King's Maker is a good prequel (it gives the characters intentions while also telling a compelling story). When you see Shin and Wolfgang having an argument, you can't pick a side because you can see both sides so clearly.

The story is solid. There never feels like there is a filler chapter. The story is always going somewhere. And sometimes the author likes to throw in some foreshadowing. It's not too complex of a storyline, but that's okay. I am a firm believer that storytelling is the most important part of, ya know, telling a story. And because the storytelling is so good in this, the storyline doesn't need to be complex. It's just like eating a perfectly baked piece of cheesecake (idk that's what came to my head). It's almost better because of the simplicity.

Season one left us with a satisfying taste of Wolfgang's victorious rose to the throne, thereby we begin season 2- Triple Crown, which blends abit of comedy, subplots, and gripping new characters that's topped off with some steamy chamber actions between.... you know who.

This season's art is even more stunning than the previous one, the scenes were painstakingly drawn to render a comprehensive view of the surroundings, saying it's beautiful isn't even stretching it, it's already part of this manhwa's strong points.... this along with Shin's character's flaw being used to advance the plot👏👏, whilst Wolfgang basically remains a himbo who'll make use of his street smarts & strength when the situation calls for it. Sys also grew ten times more adorable and became their love consultant.

As much as I adore the new characters (dead king's bastards, Wolf's childhood friends, redheads) it kinda stumbles abit when it comes to the build-up before escalating into that "bodyguard choosing day" invasion. Like I appreciate the little intimate & funny moments the artist has shown us in the previous chaps but that climax was lacking an appropriate intro, besides this and the lil derivative "North of the Wall" setting everything else is perfect.

I dun wanna give away who the villain is but this, sweetie, will be a fight between gold and red. With the root of the conflict originating from the royal family's stupid golden genealogy favouring.