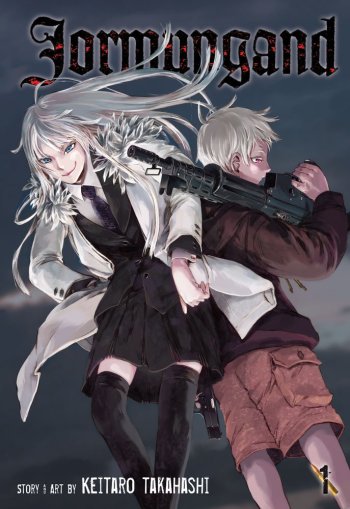 Both Black Lagoon and Jormungand are manga about a group of mercenaries of sorts. Lagoon Company in Black Lagoon does jobs ranging from smuggling, pirating to escorting and all of those contain a fair amount of gunfights. The group from Jormungand is in arms trading business, so what they mainly do is smuggling and theft (not so far from pirating). I don't think I need to mention that those also involve lots of gunfights. If you think that such groups can only consist of people who can't really be called normal, than your right on your money. Anyway, as you can see those series are similar, so you really should go read one if you liked the other.

If you liked this, you'd like this! Both from the same magazine they feature similar takes on the dark underworld of crime with mercs and arms dealers. With similar interactions between the team to contstant high paced action you wont be disappointed.

These series are so similar that there is even a crossover manga written by one of the mangaka. Excellent mix of action and comedy, with compelling, unique characters, and a fun take on the world of international crime.

Kiba no Tabishounin: The Arms Peddler

The world has become a desolate, lawless land where bandits roam free, innocent people suffer, and demons lurk around every corner. Souna Yuuki is traveling with his family when they are attacked by bandits. His entire family is murdered, and he is left with a snake mark on his hand. As he is about to die, a woman comes up to him and gives him an option: continue to live in this harsh environment or die peacefully now. Yuuki chooses life and Garami, the woman, gives him a second chance at life in exchange for his servitude. Garami is a weapons merchant and a gun for hire that travels from town to town for clients. Yuuki sees how brutal and unforgiving this world can truly be.

Both Arms Peddler and Jormungand (as you can probably guess) are about weapon merchants. Both of those manga also feature a young boy who joins an older female weapon merchant and thats all you need to know from this recommendation.

Both Kiba no Tabishounin and Jormungand have a young kid who joins with an older woman and travel the world (in high action ways). In both, the older woman just so happens to be an arms/weapons dealer who give musings upon their work.

They both involve a young male character, who grows up in a corrupt occupation. One being drug dealing and the other being arm dealers. Both characters gain skills in fighting and killing in order to live and surrounded by more skilled killers.

It is always a struggle to find this type of manga, so I hope you enjoy them both as much as I have.

In the city of Ergastulum, a shady ville filled with made men and petty thieves, whores on the make and cops on the take, there are some deeds too dirty for even its jaded inhabitants to touch. Enter the “Handymen,” Nic and Worick, who take care of the jobs no one else will handle. Until the day when a cop they know on the force requests their help in taking down a new gang muscling in on the territory of a top Mafia family. It seems like business (and mayhem) as usual, but the Handymen are about to find that this job is a lot more than they bargained for.

The only downside is that Gangsta is really, really slow to update.

The case files of the detectives at the Shinjuku Police Station paint an unapologetic picture of the worst of human nature, the horrors of everyday life, and the people that are the products of them. In this society, abused children grow up twisted, and traumatized victims turn to violence for revenge. The line between victim and criminal is often blurred when even the worst offenders are those society once failed to save. Left behind in the passing of the years, former detective Iida Kyouya must once more pick up his gun.