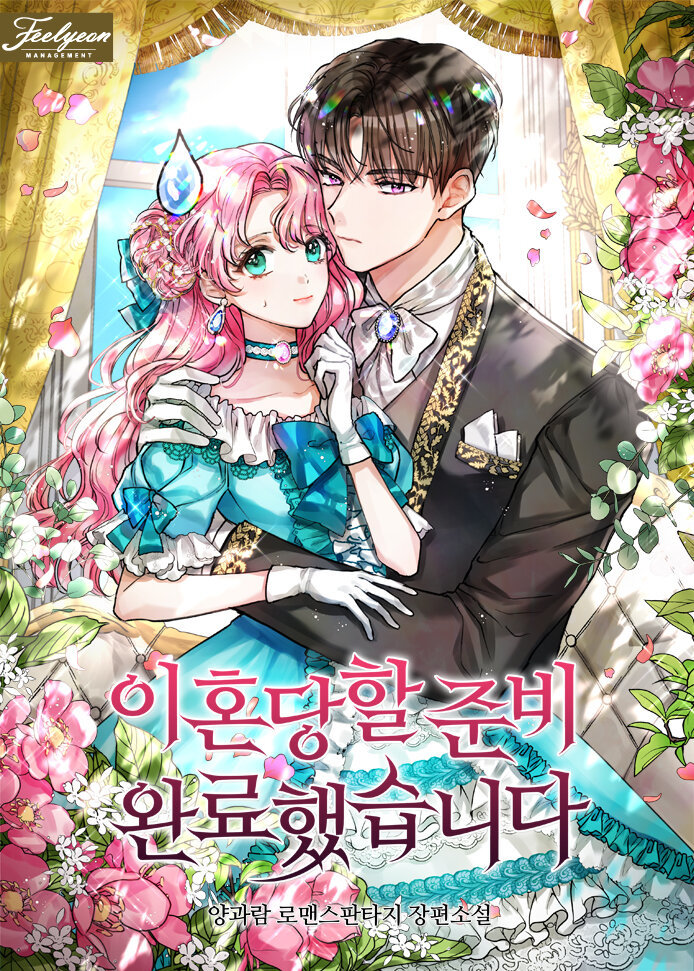 If you're looking for manga similar to I’m Ready for Divorce! (Novel), you might like these titles.

I Became the Wife of the Monstrous Crown Prince (Novel)

She transmigrated into the body of “Ancia”, the wife of the monstrous crown prince, “Blake” in a R-19 romance novel. In the original story, Ancia committed suicide on her first day of marriage, leaving Blake with a huge trauma. But this time, Ancia didn’t have any intention of leaving him. Blake is the second male lead in the original story. He is potrayed as a beast who posses an exquisite facade. Yet, right now, he behave like a naive rabbit. The only person who can remove the crown prince’s curse is the heroine, Diana. My only role is to keep this little boy from getting hurt and then step down in time. But…..

Both include female leads who come from a different world and end up transmigrating into their favorite romance books as side characters. From the beginning, the two are married to the love interest at a very young age, as children. The love interest they happen to be married to also has trauma and is the future male lead of the original novel they read. The female leads both try to raise the male lead to prepare them to fall in love with their supposed love interest in the original novel.

The Male Lead’s Boyfriend is Obsessed With Me (Novel)

I fell into the ultimate noir BL novel. I was also the obsessive maniac and villainess who fell in love with the boss of The Hundred Thousand and brutally died during the main characters’ first meeting! I thought I’d change the love between the two, which originally ended with the death of my bias due to schemes, into a happy ending...

I’ve transmigrated into the world of the BL webtoon where I left my one and only spiteful comment. On top of that, I become the adopted younger sister of my favorite character: the obsessive male lead who is later regretful for his actions, but still dies along with the duke in the end. So, I was determined. Since I have transmigrated into this world, I can’t stand by and watch my favorite character die. Additionally, I also don’t want to die. That’s why, author, I’ll need to change the tags and the ending of this webtoon slightly! “Brother, please smile like that in front of others as well.” I said to Lucian, who doesn’t smile even a little bit in front of others. “…” Was that request too out of the blue? Lucian looked at me with a peculiar expression. “If you do that, I will give you a gift.”...

I have reincarnated as Aerta Arlez, the Purifier in a fantasy novel intended for male readers. As the Purifier, I can heal the wizards' minds tainted with 'malignity'. Duke Zahid el Carnoire is the wizard who is in need of me. I did my best to avoid Zahid all my life. Because, if I get intertwined with Zahid, I was going to meet the worst ending that a human can have. Alas, my family went bankrupt even before meeting the protagonist. Now I had to choose between two worst endings. Starve to death or.....? I pondered. In the end, I decided to make a deal with one of my worst endings.

When the notorious Cabelenus von Schwarhan Blanche invades Alicia Neustein's kingdom, he destroys her home but spares her life. Intrigued by Alicia and the darkness surrounding her, Cabelenus keeps her by his side and the two form a bond, however precarious... Alicia Neustein's miserable existence in the Kingdom of Neustein ends when Cabelenus von Schwarhan Blanche swiftly conquers it at the emperor's requeset. Drawn to Alicia, Cabelenus brings her back with him to the harsh, snowy lands of Schwarhan. As Alicia adapts to her new environment, she finds herself caught in the middle of a power struggle among the nobles. When she learns she is pregnant with Cabelenus's child, she flees...but the Wolf of Schwarhan won't let her—or the child—escape his grasp so easily.

The Kids Have Changed (Novel)

Nara Lee, an ambitious and diligent 35 year old, has finally achieved her dream: buying a rooftop apartment! Little did she know she wouldn’t have time to enjoy it, as she ends up reincarnated as the 8-year-old Sharon Atrina, a side character in her favorite webnovel, “The Queen’s Extravagant Outing.” As Sharon, a wealthy and beautiful noblewoman, she has everything she could possibly want, but she’s destined to die a pitiful death at the age of 20 after being betrayed by her best friend, Carol the villainess! Rather than waiting for death, she takes it upon herself to raise Carol whose terrible personality resulted from bad parenting, into a better person, and save both of their lives to change their future!

The Reason Why Raeliana Ended up at the Duke's Mansion (Novel)

This 3-Year-Old Is a Villainess (Novel)

I possessed the original female lead of the possession novel called [I Possessed The Villain’s Granddaughter]. That is, the villainess who torments the real female lead! What did you say? It’s a villainess role that greatly suffers after doing all kinds of bad things to the main character?! Before I knew it, the genre of my life became a tragedy! I can’t live like this! However, before the female lead could even appear, there were already all sorts of events happening in front of me. Why was my Grandfather, the Villainous Grand Duke, so kind to me? And, why did my Father suddenly appear even though he was hated by Grandfather and had always been away? Also, why are my older brothers acting so annoying? Moreover. I stared at the window that floated in front of me like a hologram. How the hell did it become like this!?

I Became The Sole Perfumer of A Tyrant (Novel)

A crazy dog that goes on a rampage and kills if he doesn’t smell a certain scent regularly, I possessed Ariel, the perfumer of Duke Cedric. The problem was that Ariel, the villainess, loved this crazy dog so much. She had committed all kinds of obsessions and misdeeds. “Duke, let’s break up.” “What?” “Anyway, it was a contractual relationship that started by my forcing, right?” So I broke up with the Male lead to survive somehow. “…Wait, wait.” “Don’t worry about the perfume. And I’ll let you go without you becoming a crazy dog.” “Crazy… Dog?” Oh, my mistake. The nickname I used to call the Male Lead just popped out. I thought I was doing well, but… “Now, you’re coming here?” I looked in front of my shop with dim eyes. To be exact, on the stairs leading to the store.

Living as the Villain’s Stepmother (Novel)

I became the villainess stepmother who is doomed to suffer greatly in the hands of the male lead, who will return as a tyrant due to his years of child abuse. I can’t die like this. No, I was determined to survive. However… Why does avoiding a gruesome fate seem so easy? And, to make matters worse, my husband began to obsess over me.