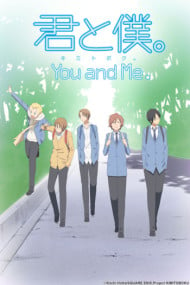 On our 17th Spring

The Day the Tulips Bloomed

Next to an Apple

Daily Wage Hero/Senpai and Me

Story Insomniacs, never fear! J.C.Staff have finally answered all your woes by unleashing the slumbering behemoth that is Kimi to Boku. No longer will you lie awake at night, tossing and turning your way into the Land of Nod, when one episode of this li'l baby will transport you there immediately. Plot? No, there's nothing even approaching that level of excitement here. This is what you'd describe as the standard template for the slice of life genre, neatly interweaving the dullness of high school life with... well, that's it, really. When the dialogue reduces to the banality of what kind of juice each person is having, you suddenly uncover a new level of boredom hitherto unrealised by the human mind. But what really makes this the perfect series to fall asleep to, is the fact that it rides its wave of boredom so innocently, so innocuously, that there is no rage at the characters being one-dimensional – or worse, Ouran High School Host Club clones – nor at the situations they become involved in. There's no screaming “but why do we care about this?!” because let's face it, there's nothing to compare it to. Highlights of the 13 episode series are... well, I suppose the one where they collect stickers from bread was mildly entertaining, though how it didn't end with an older woman inviting Yuuki back to her place, I'll never know. There's also the standard festival episode, just so that they can all dress up and watch fireworks. Which is pleasant. Now, I have to admit to some sway of bias on my part; I have previously fallen asleep to another giant of the slice of life back catalogue – Ichigo Mashimaro – but even I could see that it at least attempted to instil a modicum of comedy to proceedings. In short, what J.C.Staff have completely failed to realise is that school life series are so overdone that you need to inject something new into them or risk being swept under the carpet. Having said that, I don't think I'd expend the effort required to grab a brush to even do that. Sure, it's a sweet, somewhat ponderous look at high school life and friendship for a group of five teenagers, but where's the angst? Where are those silly little crushes on classmates that we all grow out of? Is this really the studio that brought us Takemoto's coming of age bike ride across Japan in Honey & Clover? How can anyone have made a series that even makes School Days look good? Of course, it's by no means the worst series out there and the interplay between the characters is never wholly predictable, nor for that matter, out of character – but after more than four hours of keeping the Sandman at bay, all I'm left with is a sense of mild curiosity on whether a medically-induced coma would have been a better way to spend my time. Animation It's a high school. There's not really all that much you can do with it. True greats of the school animation sequence, Kyoto Animation, pushed the bounds of the school boundaries with Kanon (2006) and The Melancholy of Suzumiya Haruhi, but the production staff on Kimi to Boku must not have been paying attention when those two were on. Locations range from the classroom to the roof to the cafeteria and sometimes even as far afield as a convenience store, so as you can see, a whole heap of variety there. Elsewhere, the characters are drawn as adequately as you'd expect from dozing artists, though there are definitely some physics issues when it comes to things like bouncing balls, and every frame seems to either be zooming out slowly or panning across (even the opening sequence, oddly enough), which only serves to give a slight sensation of sea sickness. SoundThe opening and ending really fit the show, in that they're both cookie cutter affairs that are inoffensively average. The voice actors have definitely got their bishounen voices down, with the token female even going as far as to perfect her tsundere squeals and harsh intonations. No single voice stands out among the crowd as being particularly great or particularly poor, which I suppose is all you could have asked of the cast, given the material they had to work with.Characters I have to admit that Kiichi Hotta (author of the manga source material) has some huge gonads to rip off Bisco Hatori's mighty titan of school-related drama, Ouran High School Host Club, to such an extent. Every character in Kimi to Boku is a watered-down version of a much better one from Ouran, but with the glaring omissions of foils for Haruhi and Tamaki, who actually make the show what it is. If the fact that Kimi to Boku has a set of inseparable twins with about as much sensitivity as cheese wire doesn't tip you off that they've just taken characters wholesale, the inclusion of a grumpy, no-nonsense bespectacled bore probably does. As with the voice acting, no single character rises above the parapet of unremarkableness and merely remembering their names is an achievement in itself. It doesn't help that they don't even act like high school students, with affability being the name of the game. There's absolutely no banter about Shun's feminine features, Kaname's unrequited crush on his teacher and his childhood friend's older sister doesn't culminate in a misjudged affair, and the blonde annoyance whose name escapes me right now doesn't dissolve into a mess of jealousy over sheep girl. Mildly put, there is no conflict, no room to grow – and in a series that is solely about growing up, there's little wonder the cardboard cut-outs called characters don't go anywhere other than staring at flowers and trying new kinds of bread. OverallZzzzzzzzzzzzzzzzzzzz.

The story revolves around four teens—the good-looking Asaba twins Yuuta and Yuuki, the effeminate Matsuoka Shun, and the class head Tsukahara Kaname —who have known each other since early childhood. While they are not necessarily good or bad friends, they continue to hang out well into high school. The half-Japanese transfer student Tachibana Chizuru joins the circle of friends in this comedy about the everyday life of adolescence. Warning: this series is slow paced and episodic. If you don't like either of these things, or simply can't deal with either of these things, then this series is not for you. When this series first began back in 2011, I had tried to watch it ... but at that time I just couldn't handle the slow pace and wasn't even able to watch past the first five minutes of the first episode. But in the years since then my taste has changed, and now I love the pacing and how relaxing it was to watch! Kimi to Boku was a very enjoyable series. I loved how laid back the characters were! My favorite characters were definitely Yuuki and Kaname, though I also really like Yuuta. Chizuru grew on me, as well, and I always found it amusing how everyone seemed to think of Shun as the girl of the group. In the end this was definitely an enjoyable series and I'm glad I gave it another go!

Introduction: While watching the first episode I felt quite underwhelmed and eventually fell into complete boredom. This anime isn't bad, but just boring in my opinion. The main characters are the least likeable characters in the cast. The supporting characters and minor characters are the only reason this thing is somewhat entertaining at times. However this also means that it's extremely episode depending wether it's simply a little underwhelming or mind numbingly boring. Story: It's a slice of life, so the story isn't important at all, the flashbacks were done quite well at times but were rather short and made it hard to connect to the characters before it was over. Generally there isn't any conciderable development in the main characters between their flashbacks and current day demeanors. Sound:  It's okay, the opening and closing themes are rather generic but not horrible. Animation: The animation is clean, however kaname and the twins all seem to have a conciderably bad case of one expression only. That being ''dull surprise'', which means that they won't really convey their feelings all that well. Men are not very open about their feelings, but they will still change their facial expression... ( note that the twins are the most guilty of this, Kaname also has: Dull anger and Dull lovestruck ) Characters: Both twins are hard to seperate and I don't really care to either, they both act the same 85% of the time. Notably: One of the twins is good at every sport and both of them are concidered very good looking. They are both exxagerated stereotype ''perfect'' guys. They both are distant and show hardly any emotion. One of them helped a girl with good intentions, which was quite hardwarming... I think. His expressionlessness kind of ruined the moments for me. They are both  meant to fill the ''deathpan snarker'' trope with limited appeal. Kaname was the group mother and more realistic than the twins and he's also got some interesting character relations out of the main cast I might have liked him ''best''. His mother is hilarious and the lovetriangle he's part of is quite interesting. The blond haired kid was there to spice things up a bit it helps... sometimes... but he's largely just an annoying halfwit. He's the ''genki guy'' ( for reference see: TOMO from Azumanga Daioh ) Shun is a girl with male genitalia complete with female mannerism and being mistaken for a girl, however Although I love traps... shun manages to be quite a boring cut-out one at that, since his entire personality can be summurized as ''conciderate girl'  The love crush of ''shun'' in the most interesting reacurring characters. She's a a almost but not quite generic loli-tsundere. Overall: This anime is very slowpaced and very slice of life. The characters are somewhat exaggerated parodies of girls and men in some slice of life's, which gives openings to some hilarity which isn't always exploited. Some actions were pretty cute and the supporting characters in this anime are all fairly likeable. Ultimately it's lack of charm falls on it's somewhat lacking main characters. Recommendation: watch when: You are really really really into school life anime can condone with only watching cute boys in anime.  Don't watch when: You watch slice of life, school life anime for cute girls When you're not into slice of life / school life. When you want a comedy heavy anime. ( Although ''tagged'' comedy it's really light on the comedy ) 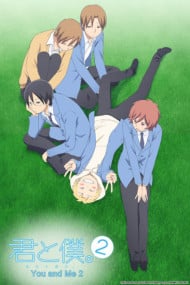 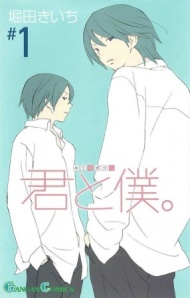