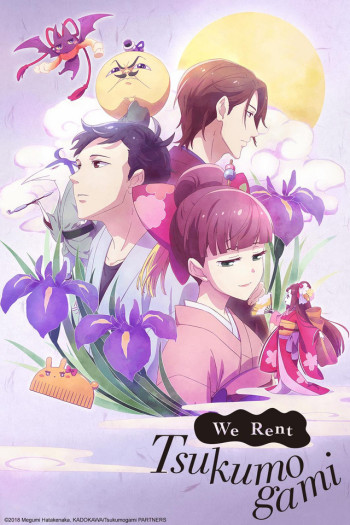 Imagine running a rental shop where the objects come alive whenever they like to talk about your problems and gossip among themselves, as they pick apart all your life choices and offer unwanted observations and insight. Think Toy Story, but with a more traditional slant to it, where the sentient objects do more than have existential crises about being mere playthings for people. That’s this show in a nutshell, where the title describes objects that come to life after years of being cherished by their human owners. And because the story has to go somewhere, the spiritual tsukumogami aren’t all talk – they’re dedicated problem-solvers too, and it’s because of this their sibling owners see more business than the average rental shopkeeper. It’s an aspect that lends some uniqueness to the show, as the siblings are able to meddle in their customers’ lives and offer advice when needed, blaming their pinpoint guesses on a simple hunch or a rumor they just so happened to have heard. Did I mention the siblings are adopted and aren’t actually related by blood? At first glance, Tsukumogami is a simple story told through the lens of a very novel concept, and like most episodic shows, the main characters encounter other people and help them solve various problems. There’s an overarching plot here that’s meant to keep you interested and give this story some direction, and because of this, very few of the side characters are one-off and actually do show up again after their first appearances. But that’s where the appeal starts and ends, mostly because there isn’t anything else that would have helped this show stand out and make an impression. Despite its interesting premise, Tsukumogami seems to be, at its core, a roundabout way of getting the adopted siblings to hook up. There is also the catch to the whole deal, which prevents the humans from directly conversing with the tsukumogami, so it can get awkward seeing the spirits and their human owners talk around each other to get the desired results. And while the tsukumogami are a lively bunch, they’re still just a collection of tired character stereotypes, whose only stand-out personality quirk is their shared status as meddling spirits. Even the main characters are strictly bound to their tropes and the limitations that come with them, so in the end, they’re unable to be anything beyond Kind Brother and Troubled Sister. Besides its unique premise, there’s little else about Tsukumogami that makes it something to remember. Nearly everything about it is average and dull, but because of its episodic nature, that doesn’t mean it’s incapable of delivering some quality standalone stories. If you keep your expectations low for this, then it’s still possible to have a good, easy time with the tsukumogami regardless. [This review was made for the Anime-Planet Bingo Challenge: Winter 2019 event. Don’t be fooled by Tsukumogami’s generic pop bop of an OP – this show can get pretty jazzy when it wants to, because it knows there’s no sexier combination than ancient Japanese stories set to jazz soundtracks.]