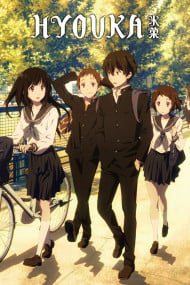 Well, it tried, I'll give it that.Hyouka, also known as "Hyou-ka: You Can't Escape" (a title that basically means nothing) is the latest series by acclaimed studio Kyoto Animation, who, despite their huge fanbase, generally produce work of more style than substance. Hyouka unfortunately follows this trend, though superficially it doesn't fit in with the rest of KyoAni's back catalogue very much. Hyouka is generally very dry in tone... which pairs up somewhat poorly with KyoAni's signature over-the-top style.Hyouka is a mystery series, revolving around four high school students in the Classic Literature Club (an aimless club that happens to end up solving mysteries a lot). The students in question are main character Oreki Houtaro, whom I am about 99% certain has some form of autism. He has zero interest in socialising, fun, or... well, anything. He deliberately tries to live life as uninterestingly as possible. This is hampered a bit by him being insanely gifted at solving mysteries. This gift goes untapped until he meets Chitanda Eru, a plucky, cheerful girl with an insatiable curiosity who refuses to let the even the smallest of mysteries go unsolved. They are joined by Satoshi Fukube, a cheerful happy-go-lucky human database simply full of useless facts who is seemingly Oreki's only friend prior to the series, and Mayaka Ibara, a library assistant who's known Oreki since childhood, who is probably the most level-headed member of the cast.Now, remember how I said Eru refused to let even the smallest of mysteries go unsolved? Well... that's the big problem Hyouka has. The mysteries really are the smallest of mysteries. Each and every one revolves around a very trivial subject, and just about all of them could have gone unsolved without any real problems. Something so down to earth could in theory have been a good idea, but unfortunately Hyouka doesn't really deliver. As a result, Hyouka is, in a word... dull. With the exceptions of one or two mysteries, Hyouka totally fails to be entertaining.But that isn't to say they didn't go the extra mile to make Hyouka more interesting. KyoAni's huge animation budget is flexed quite a bit. Random quirks in the presentation show up every now and then when Oreki is explaining his theories, sometimes in rather trippy fashion. The unusual techniques in the directing aren't limited to these, though. Hyouka plays around with angles and closeups a lot, to try and make every scene more dramatic.It doesn't work.While they occasionally spice up a scene a little bit, they really don't do much to save Hyouka from being very, very bland. And often, the harder they try, the worse it gets. It's most "dramatic" moments end up being, if anything, idiotic for how hard they're trying to sell something so insignificant.Directing techniques aren't the only thing in Hyouka intended to spice things up, though. Character-driven subplots are also involved. All of Hyouka's cast members are likeable, if nothing special... though Oreki's disinterest with everything can be irksome, and Chitanda can be more saccharine than cute sometimes. Romantic subplots flare up between the characters, as well as some mild feelings of envy from Fukube towards Oreki, and these would all help a lot more if it wasn't for the fact that all of this goes absolutely nowhere and amounts to nothing. Just like the directing techniques, it's an attempt to spice it up that at best is a mild amusement, usually falls flat, and at worst, is simply idiotic.With all that having been said, Hyouka is not bad. But it certainly is not good either. At the end of the day it is simply very average. But there are really much better wastes of your time out there than Hyouka.Final Words: For the biggest of mystery enthusiasts and diehard KyoAni fans only.Story/Plot: 5/10Characters: 5/10Animation/Art: 8/10Music: 5/10Acting: 7/10Overall: 5/10For Fans Of: UN-GO, Gosick 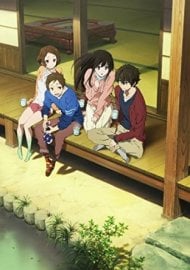 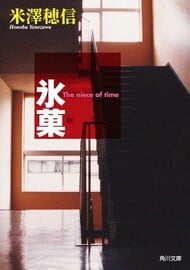 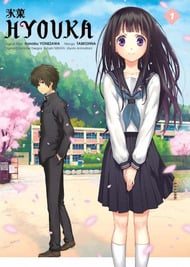