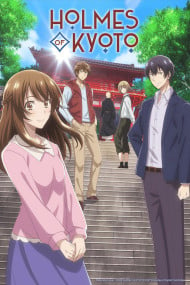 In Days of Aoi

The Case of the Mt. Kurama Estate Inheritance

The Sound of the Bell at Gion

Conditions of an Heir

Charming! This is a lovely slice of life, slightly intellectual, light mystery anime set in Kyoto and centered around a wealthy family's antique shop. A dash of art and history is thrown in. The main characters are Holmes and Aoi Mashiro. Holmes who's real name is Kiyotaka Yagashira, is a wealthy college student whose family owns the store and he has quite the reputation for his powers of deduction. He works as an apprentice at the store and solves an occasional mystery on the side. The mysteries, of course always seem to come to him, he doesn't have to search them out.  Aoi is in high school and works part time after trying to sell an antique to Holmes and he ends up recruiting her when he discovers she has a keen, discerning eye for genuine/quality articles. Aoi quickly becomes his assistant/underling and a great foil to display Holmes' brillance against. I really adore the main character, Kiyotaka Yagashira and his interactions with Aoi Mashiro who is new to the Kyoto area and recently heart broken. He tries to play that he isn't interested in Aoi, but his actions and words seem to suggest otherwise.  I can't help shipping them and hope more will transpire in this direction. Even if nothing happens on this front they are both positive influences on each other and their interactions are cute. I guess time will tell. This is a bit fluffly and light hearted, but in a good way. It's a nice change of pace for me, I watch a variety of genres but heavily favor action heavy animes. I like learning little tidbits about the Kyoto area and getting a little arm chair traveling in.  The anime moves at a leisurely pace, much like enjoying a warm cup of tea. Don't expect a great deal of action. The "mysteries" are not terribly detailed and often it's a bit obvious what has happened before "Holmes" comes up with the solution. While not terribly deep, it is still entertaining and I look forward weekly to each new episode. It's a bit inexplicable to me, as I normally would think I'd find the pace a bit sedate and the show dull, but somehow I really do find this charming. And really, most of all, I  desperately to find out why Holmes is a nasty Kyoto Boy.  ;) Which is what Aoi calls him at least once every episode.

This anime covers many bases. There is love, slight mystery, antique knowledge, and a main character who sees more than people want him to like Sherlock Holmes or Hercule Poirot. The characters are developing nicely so far and the episodes aren’t repetitive. This is a really cool slice-of-life-ish anime. 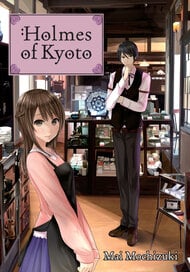 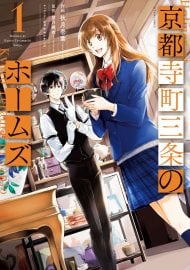