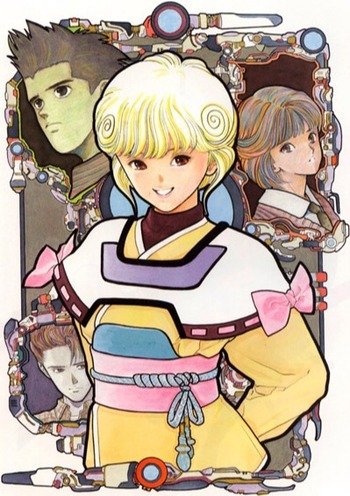 I'll admit I had an aversion against watching Video Girl Ai, due to how incredibly generic-harem-romance-y it seemed to be based on the description and overall plot. In addition, the current main recommendations in the database are Chobits and AMG (which I feel are totally inappropriate), which also turned me off to the idea of watching this. I came away from watching this OVA, however, with a very pleasant feeling, as it's definitely more like Kimi ga Nozomu Eien than any of the above mentioned series.

Our story starts out with Yota, a poor young man who is holding his tongue and hurting his own feelings deeply. He is in love with his friend Moemi, but she is in love with his best friend instead, and he can't bear to ruin her "being in love" for his own "selfish" desires, essentially. His best friend knows how much he cares for Moemi and is in the dark about Moemi's feelings for himself, thus causing a very hurtful triangle of love. Yuta is heartbroken after hearing Moemi's confession of love for someone other than himself, and finds himself in a mysterious video store that only appears "to those pure of heart", and brings back a video that supposedly contains the girl of his dreams. Due to having a broken VCR, this girl (named Ai) comes out of the TV and becomes real! With newfound help he might just be able to win Moemi's heart, and stop his own from breaking...

The only reason I knocked off points were for some minor things, such as the gaping plot holes related to Ai and how she came out of the TV in the first place. "It's because of the broken VCR! Dammit!" .... riiight, that makes sense. The ending was also a bit convoluted and hard to figure out exactly what happened, and is a stretch of the imagination for sure. Besides this, though, the overall point of the OVA was the romance and drama and it succeeded at being moving and compelling, easily.
Animation
Not the highlight of the OVA, but nothing bad enough to make you not want to watch it. The character designs were easily the most "offensive" of all the animation, with Ai looking very doll-like and grotesque as a supposedly attractive female. She had hair that looked like a 60 year old wig and in general resembled some form of strange mutant beast. The other characters (especially Moemi) looked fairly mouse-like, or generally neutral. Colors used were dark and in general the animation style seemed a bit wrong, for some reason. It almost looked like detailed oil paintings, but in a weird sort of way. It's hard to explain so I'll stop trying to explain myself. In general, effective animation but it could have been better.
Sound
I really enjoyed the music. Granted, a lot of the time all you hear is real life sounds such as crickets or cars moving by, but the rest of the time we hear light and melancholy tracks that have pianos and light singing. Really fit the mood, in my opinion. The voice acting was great for everyone involved, though the dub sounded godawful, the little bit that I accidentally heard.
Characters
Again, a strong point of the series. The romance aspect was incredibly strong and powerful, and the characters were at the forefront of this, and helped make it happen. Moemi was the only character I didn't enjoy as much, because she was so blindly clueless to the fact that she was hurting Yota. I kept wanting to shake her and say "woman! wake up!", but that just goes to show how effective the romance and heartbreak was portrayed. Yota was likeable and you felt sorry for him, truly sorry, that he didn't have Moemi's love. This, again, is so, so rare for a romance series. He wasn't a bumbling idiot who deserved castration, he was a nice guy who was passed over for his friend. Ai was another important character though I admit I wasn't as drawn to her, or her development.

In general, all the characters were very well developed, especially Ai, which made for a refreshing and interesting watch. The romance and the characters went side by side: the series wouldn't have succeeded as much as it did without them.
Overall
I was very, very surprised by how good Video Girl Ai was. If you've heard this is ecchi, harem-like, or generally a comedy, think again. Though there are minor elements of comedy to be found, Video Girl Ai is a very sad and hopeful romance at heart. Only Kimi ga Nozomu Eien is a good comparison for this, in my opinion, and those who are wary of watching this because of the Chobits type recommendations should know that I personally don't feel they fit well. This isn't a bumbling idiot comedy where the girl falls over the guy, it's a sad tale that will tug at your heartstrings and make you root for the underdog. This was a great watch, and I'd probably watch it again, even. Check it out for yourself.

Video Girl AI is a sweet romance, although the ending was a little confusing. It didn't really explain anything, which is more than a little frustrating. However, it was a cute little love story that kept me guessing until the very end.