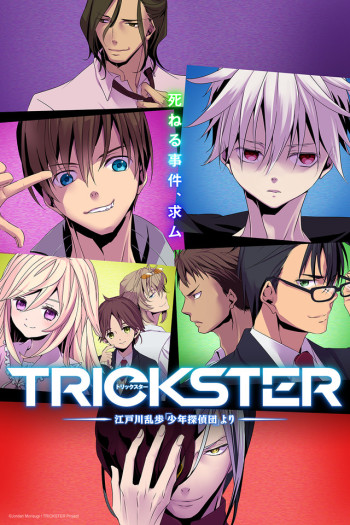 What a fucking terrible show.

Written by Erika Yoshida, who is practically a nobody who wrote 3 really bad manga an this I think is the first anime he's written and directed by Masahiro Mukai whose only experience was directing a few episodes or some anime and 1 or 2 movies and OVA's. You see what I'm getting t here? It seems that this show was driven by an inexperienced staff.

It's done by TMS, these guys have really high production values and it really shows, absolutely beautiful backgrounds, the colour design all simply well done. Character models look kinda bad though especially coming to the end of the show.

The sound design is excellent although at times it can seem awfully quiet and no it does not add to the suspense of anything, it just makes me want to sleep

Pass this one, it's got nothing.

When someone blessed with that one curse... Not being able to die... Immortality? Even after many suicide attempts(#BungouStrayDogsDazaiDream) (#NarutoGara-like),he meets a boy named Hanasaki, a member of a peculiar Detective Team, proposes a peculiar deal which consists in the cursed boy, Kobayashi, joining the team in order to die by the hands of no other than Hanasaki who still needs to figure out how to... 'Fiend with twenty faces' looks like a mysterious guy wearing masks which look like a person's face as cover for his evil acts, shows his intellect on the first episode by escaping a bad ass member of the bad ass Detective Team(the peculiar one) in a ninja smoke grenade way, yet he's not so smart as he almost got caught on the damn first episode, but the way he escaped shows us that the ninja path he chose was worth.

I'm still hoping to find out how worth watching this is rating from 1/5 & 0/10 so I can share with you. It's not a bad start at all! I'm expecting a bad ass development and a bad ass end, one not so emotional.

-Ratings & Text are to be edited soon.

ImLazyAF4avname and yet I managed to share with you my thoughts through this giant top ass review. How special do you feel you feel? Answer me below with your votes kohais!

This anime in a nutshell:  This is the result of what happens when a psychopath and a sociopath get bored and seek thrills with each other.

...as well as all the lives they destroy (sometimes literally) along the way.

It's not the worst anime I've seen, but it's far from being the best, either.  It did have potential, but there was no commitment into said potential.

There are two interlacing plots in this anime.  The first and most interesting of them is the mystery of the "zombie boy", Yoshio Kobayashi.  Why can't he die?  What's the trick to his strange power?  He is discovered by Kensuke Hanasaki who is trying to track down a lost dog as a member of the Boys Detective Agency and then brought to the agency on the promise that Hanasaki would try to find a way to kill him.

The other plot occurring is that the city is being stalked by "The Man of 20 Faces", who causes all sort of panic and trouble; Akechi Kogoro, the leader of the Detective Agency, has been chasing him down for years with nothing to show for it.  While 20-Faces continues to cause damage (and just be a creepy psycho) and use everything and everyone around him as pawns, Akechi is honestly no better though he's the "cop" to their city-wide game of "cops and robbers".

Honestly, the biggest "story" in all of this is Kobayashi's personal journey.

Kensuke Hanasaki flips between being an annoying eternal optimist to hitting his teen angst years late.  If it wasn't for the fact that he is shown to feel bad about things, he could be a borderline sociopath as well.

Yoshio Kobayashi is an amnesic, mysterious boy who probably shows the most development in the entire series, though his flippant attitude about life and death and seeming lack of empathy towards others can be offputting.  This is derrived from the fact that he can't die; a strange power prevents him from dying no matter what he tries.

Akechi Kogoro is a borderline sociopathic man who tries to do "good" things, but honestly isn't too much better than 20 Faces in how he uses others and shows them no sympathy if they're struggling.

20 Faces is a bored psychopath who is obsessed with Akechi and seems to be able to brainwash people with some mysterious power.

The other characters stay fairly consistant throughout the series, with only a spattering of character growth here and there at an almost unnoticeable level.

The characters, themselves, don't seem to have much of a bond.  Rather than a well-oiled unit or a team, they feel like a bunch of strangers who were just thrown together by chance and told to work together (even though it's all their own will to do detective work).

If you're going to watch this, don't watch the English Dub.  Please.

I accidentally stumbled upon it on Funimation's site when looking for the next episode, and...it's horrible.  The Japanese voice acting is, as usual, entire bodies better (not just the head and shoulders) than the emotionless English Dub.

The music is forgettable.  I was not a fan of the opening or outro songs, and the music in the anime itself is...well, I don't even remember it.  There was one episode where they tried to use cognitive dissonance but failed miserably because there was nothing horrific going on (just Akechi surrounded by books and some flashbacks).

No real complaints about the animation.

This had the potential to be much more than it was.  At one point, a philisophical question of morals and "what is justice" came into play...but sadly, the creators didn't commit to grasping that and running with it.  They tried to touch a little on it, but did a terrible job at doing so and just couldn't seem to put both feet in the water of philosophy.

They could have really made the viewers question morals and what "justice" is, but instead gave us a lukewarm taste of what it could have been and then went back to mucking about by jumping between the Hanasaki/Kobayashi plot and the 20-Faces/Akechi plot while scattering a few ideas and characters here and there.

A couple characters even show up later to question "justice" even more, but in the end were also wasted potential.

As I watched the series, I found myself much more interested in the mystery which was Kobayashi (and their mysterious powers and how they got them...which, by the way, is never explained in a satisfactory manner) and his character growth and past (as well as strange budding friendship with Hanasaki) than I did about 20-Faces or Akechi.

I even skipped and went back on a couple of episodes because the 20-Faces focus (when the focus was on him and Akechi) was incredibly boring.  It attempted to be some sort of suspense, but failed on that angle and was just...dull.

There were even some scenes where time was of the essence and the characters were just...standing around.  While there are good action scenes, the anime is also riddled with a lot of nothing happening and (often pointless) dialogue.

The first thing I said to myself when I finished watching the series was the line I used to open up this review:

This anime is pretty much the result of what happens when a psychopath and a sociopath decide to play a game of "thrills" with one another...and all of the people who get hurt because of that.

There's not much more to say than that.  If you're looking for something fairly mindless (and can tolerate the slew of annoying characters), I suppose this is a good way to aleviate boredom.  It's certainly better than using people as tools to play some sick game with another person to get a "thrill" out of it.

Mindless background noise, especially if you're not a fan of Kobayashi's character.  Episode one is also extremely confusing and just a little weird (and ironically, the "weird" part isn't Kobayashi's powers).

I REALLY THINK THAT THE START WAS AMAZING XD

so it´s about Hanabasaki Kensuke and Kobayshi Yoshio and Yoshi wants to die because he doesnt want to hurt anybody ;-;

So if Yoshi joins Boy Detective´s club then Kensuke promised to kill hme :´) I look forward to it but still a want him to be alive or just turn in to a normal person XD

btw I´m maybe changing some of it when I watched more of it :)

*Warning: rating and review are only based on the first episode. Will be updated after finishing or dropping the anime.*

First let me warn you that the rating will almost certainly go up or down. If I were rating purely personally I'd give it a 10 but I can't quite do that with only the first episode watched. I was left with too little understanding of anything going on to not lower to rating a bit. At this point the show could either be one of my personal favorites or a huge disappointment. We'll just have to see.

I've been excited about this show since hearing about it at the same time I learned more about Edogawa Ranpo (because of Detective Conan of course) recently. So I knew the Boy's Detective team (I keep calling it Shonen Tantei in my head) as well as the Fiend with Twenty Faces were going to show up. After the credits rolled, that was still basically what I knew. The characters were all interesting and easy to recognize for the most part and the futuristic setting was quite exciting.

But I spent most of the episode lost. Things happened, exciting things, but I kept getting more questions and almost no answers. Kobayashi Yoshio raised the biggest issues with his odd "protective" shield and his constant attempts to end his life. Hanasaki Kensuke was easily my favorite character (reminding me a great deal of Kudo Shinichi) and the best parts of the episode were his interactions with Yoshio.

The animation was quite good and I liked all the voice actors. I'm looking foward to where this show is going this season but this is, so far, the most tenetive of my must watch shows for the fall.