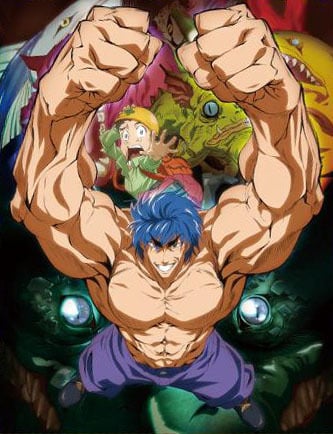 Toriko and One Piece are ridiculously shounen action-comedy romps set on the sea/small islands with over-the-top stories and absurd characters/animals.

Both are these are hilarious action shounen titles about adventurers traveling to acomplish a special goal. They share the same humor style mixed in with similar shonen action. The main characters, Luffy and Toriko, are also very similar. Fans of one should check out the other. 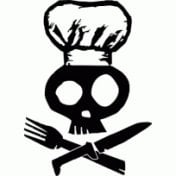 Both series share a carefree feel and an insatiable protagonist. They go so well together that even the producers have made crossover episodes,

If you like manly characters that are simply awesome look no further than these 2 titles. Both have crazy GAR characters that love to eat meatbones and kick some serious ass.

Both follow a story of growth from as a strong character and a weaker character shonen character support each other and feature fantastic fight scenes.

In the world of politics, public officials are abusing their power and using the citizens' hard earned money for their own whims - be it extortion, payoffs, or worse. To combat this problem, the Japanese government created their own version of the FBI: an independent agency with tremendous resources, the Government Crime Investigation Agency! Jotaro Zaizen, GCIA agent, is a manly man who uses a variety of manly means to take down the corrupt and the unjust. With his super-legal privilege Zainers Gold Black card and his trademark saying "da bomb," Jotaro will do whatever it takes to both get the job done and win the ladies.

I like Toriko WAY more than Jotaro, but both involve seriously manly men who do manly things. Jotaro does police-type work, while Toriko hunts down delicious morsels. Both will have you laughing heartily.

While this recommendation might seem like a strange one at first, both Toriko and DMC are relentlessly funny oddballs in the comedy genre. They are anything but refined, and don't hold back with their jokes in the least (FORK and KNIFE and the manager come to mind). If you liked one of these shows for their wacky sense of humor, don't miss out on the other!

Riding Bean is a one episode OAV by the creator of Gunsmith Cats. Its lead charater is Bean Bandit, aka, 'The Roadbuster'. Bean operates as a contract driver; for good or for bad, if you have the money, he can do the job. This time though, he's been framed for kidnapping the daughter of a wealthy businessman. Good thing Bean is bulletproof.

So much testosterone between these two titles, you could grow a full beard on a baby.

Toriko is more slapstick comedy, Riding Bean is more to do with fast cars, but both have a male lead that is too large for the show, almost bursting from the confines of the one shot episode.

If you liked one, for the burliness, you should like the other.

Drawn to the mystique of the unknown, Hunters travel the world in search of terrifying creatures, incredible riches, and unexplored lands. Gon Freecss is a naive-yet-determined young boy who aspires to join the ranks of these individuals, in order to find his missing father Ging - a master of the profession himself. To reach this goal, he boards a ship from his home on Whale Island to partake in the formidable Hunter Exam, a series of tests that push the participants to their physical and mental limits. But soon, the boat is thrust into the middle of a horrible storm and strange monsters begin to attack! While Gon and newfound acquaintances Leorio and Kurapika struggle to keep the ship afloat and on course to the exam, little do they know the trials have already begun!

The Uraharajuku Boarders may have been knocked out of the Kantou Tournament, but a mysterious proposition from a mysterious man may influence the Governor, a graduate of Uraharajuku High School, to allow Uraharajuku to play Sena Kobayakawa and the Deimon Devilbats in the equally mysterious Golden Bowl, whose winner will seemingly receive a place in the Kantou Tournament. However, when Sena and company arrive at the field, they find the Golden Bowl may be something they didn't bargain for against opponents they may not be able to beat.

One Piece: Defeat the Pirate Ganzak!

In a school full of delinquents there’s one badass that stands head and shoulders above the rest, Tatsumi Oga. One day, after seeing a bizarre man floating down the river, Oga gets the shock of his life when the guy splits in half and a baby crawls out, and immediately latches onto him. To make matters worse, a demon named Hildegarde approaches him and informs him that the child he’s suddenly inherited is Beelzebub, the next demon king, and Oga has been chosen to be the baby’s parent – that, and the baby’s cry emits a powerful electric shock that proves fatal if he’s more than 15 meters from the terrifying teen! Now, after discovering that he was only chosen for being strong and vicious, Oga decides to seek out the toughest badass of the lot in the hopes that baby Beelzebub will choose himself a new parent.

Both specials are to introduce a shounen series full of action and awesomeness. These episodes are basically taste testers for people who might be interested in watching the series. Check em both out! (Gintama is comedy based)