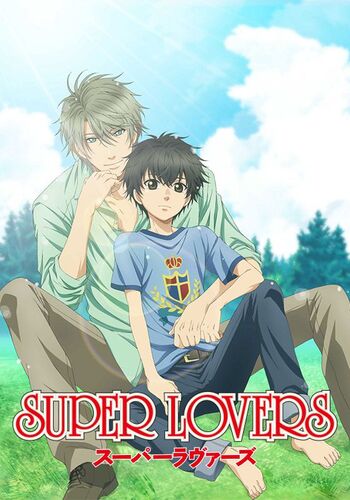 I had to drop this one, even though I love most Yaoi. I try to be open minded with everything, but I couldn't get past how young Ren looks in the beginning of the show. I know, most Yaoi is like this, but Ren just looks ... So young. I don't know if he gets older throughout the show, but I couldn't stick around to find out.

If you're into the BL genre, this is a good watch. Per se, it's less than average. What I mean is that I've watched quite a few BL anime, and the ones that are really good are only just a few - so given the overall quality of the genre, this qualifies as good.

The story is about a small boy, Ren, abandoned and abused, and his relationship with the son of the woman who takes him in. After the initial bonding period which takes place in Canada, the two are separated and are then reunited after 5 years when Ren, to fulfill the promise made with Haru, turns up unannounced in Japan stating his intention of wanting to live with Haru - while Haru doesn't remember him at all because of an accident he had shortly after returning to Japan from Canada. The development of the relationship between the two is initially hindered not only by Haru's amnesia, but also by his two other younger siblings who refuse to accept this new little brother. This summary might give you the idea of an overly serious or dramatic story, but I assure you it's not: the tone is nearly always light and comedic.

The first episode was way above my expectations, it sets the story perfectly well and gets you interested in the characters. Haru, Ren and Haruka are all portrayed extremely well. Especially Haru comes across as one cool character with all the effort he puts into getting an abused and scared little boy to trust him. After this really good first episode, the quality of the anime goes steadily downhill; Haru, who initially seemed to be the strong point of the anime, appears now to be quite shallow and superficial. Which is a pity, considering how this character started off so well. Anyway, most of the following episodes are slice of life/comedy. Towards the end, the anime gets slightly better, but from a BL fangirl's point of view. The relationship between Haru and Ren gets developed slightly more in depth and there are a couple of interesting moments - but they're just hinted at. It's unmistakably BL, so I don't understand why they then have qualms developing it as such after they go to the trouble of starting it off as such.

The characters are a mixed bag. Haru, as already said, starts off in a great way, but then increasingly disappoints. He's shallow and quite unaware of his own feelings or how his actions and attitude affect the other people in his life; he could have been developed much better and given more depth of feeling. Ren is a good character and portrayed well; he's this scared little boy who doesn't trust kindness in others and when he finally meets someone without ulterior motives capable of tearing down his defenses and showing him unselfish love and affection, he loves him quite unconditionally from that moment on. He's quite a moving character. I also liked a lot the two twin brothers, Aki and Shima; even though at the beginning they are quite off-putting and obnoxious, they develop into likeable characters and they made me laugh more than a few times: I would have liked to see more of them. Haruka is also a cool character. So in the charcater department, I'm sorry to say that the one lacking the most is Haru; that isn't to say that all the others would have benefited from more development, too.

Animation is good and so is the sound.

Overall, it's good for the BL genre as there is a story whose characters are portrayed well enough with also a tiny bit of character development. If you're not into the genre, you might enjoy it if your expectations aren't very high.

So first let me say that this anime was made extremely well. If you enjoy this type of shi... I mean stuff, then you're bound you like it. The quality is exceptional. The main and secondary characters are very likeable. The art is beautiful, the sound is perfect and the story is... well it is exactly what you'd expect from a slice of life type of romance. It's the first boys love type animation I've ever seen so I have nothing to compare it to and chances are I won't be watching many others. Not because it's bad per se. Just because it's not for me. Honestly I'm not a big fan of slice of life and I don't go out looking for boys love either so....  The scores I gave this anime are based on how I think it would be rated by others who enjoy these genres.

So lets move onto the story. The story has a good foundation. The first episode was enjoyable to watch. Ren's personality in the beginning and the little bits we find out about his past before Haruko took him in, made the story more interesting. However, the majority of this anime is light, happy go lucky, fluff. If that's your thing then have at it. However, If you want a little more of a serious story that has a bit more depth to it then this is probably not for you. Don't get me wrong the show was created so well that it made an otherwise boring storyline totally feasable to watch with it's exceptional artistic flair and little bit of humor sprinkled thoughout each episode. However, as for the story itself... I'd say it falls short of expectations. Given that it's a slice of life though, I cannot really be too harsh on it. Since this is what Slice of life is sopposed to be like usually.

The animation is good but it's the art that really makes it shine. I already spoke briefly about the artistic flair but the characters especially Haru are drawn beautifully. They animate and focus in on the little things and there is not a single slip up that I could see in the animation. It was all very detailed. The characters expressions are expecially fun to watch.

The sound was good but I was not a fan of the OP or ED. They did go well with the tone of the show which I sopposed is part of the reason it didn't mesh well with me. However, the voice actors all did an excellent job and sounded perfect for the characters they voiced.

The Characters really are a mixed bag here. Although I like the Illustrations of Haru Better than anyone else. His character in general was not to my liking. Perhaps it's because he's superficial and shallow. I can't imagine any future with someone like him being a happy one. He tries to act like the more mature person and he is much older than his love interest but in terms of mental maturity Ren has him out classed and he is a child. Sure ren isn't very emotionally expressive but he's way more intuitive than Haru and seems to think things through more carefully as well. I do like Ren's character for the most part he helps add depth to the story. In this anime because of the absense of a strong story it really falls on the characters to be able to get the job done and bring the anime out into the spotlight and some of the characters such as Haruko and Ren really are interesting and likeable while others are just eye candy like Haru. Overall, I feel the anime did a good job in the character department though.

So if you are wondering if you should check this out. First remember, this is a boys love story between a grown man and a child but the romance is very light. There are some parts in episode 9 that go a bit further than I was expecting but for the most part it stays in the realm of cute. Which could be a good or bad thing depending on the viewer and their preferences. Overall it has a good presentation, so if this is your type of anime then you should definately check it out.

I can't believe that lots of comments are making this about age thing and I bet half of people that are so morally enlightened didn't read the manga where Haru actually waits for Ren to get older and it's mutual thing going between them.

I couldn't get myself to finish it when the romance started taking place. If it wasn't for the age gap this would've been decent. I'm extremely mad about that. Why does most gay content deal with age gaps? This is literally pedophilia. If you enjoy this you’re fucking sick.