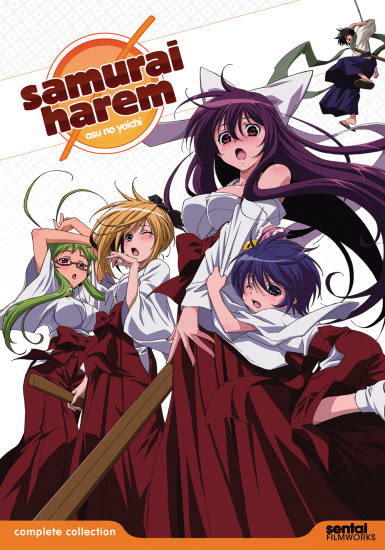 If you're looking for manga similar to Samurai Harem: Asu no Yoichi, you might like these titles.

Tachibana Sango is a poor student looking for a decent place to stay on a shoestring budget. When it appears that he has found the perfect place, it turns out to be anything but, as his new roommates, a trio of young ladies, seem determined to run him ragged and make his life miserable.

Takaho was pleasantly surprised when it was announced that her older cousin, Fujistsugu, would be moving in with them. He was her first crush and she was hoping to deepen her bond with him as a little sister. Little did she know that her seemingly handsome and perfect cousin was actually—

Four college housemates — Juwon, Eunho, Seongjae, and Gyumin — are in desperate need of a fifth person to fill a vacant room in their place. But their main concern isn’t about paying rent: they’re ravenous vampires, dying to sink their teeth into a fresh, live human! So they can’t believe their luck when Dongha, who grew up isolated from society, eagerly moves in with no idea of what awaits him. To the vampires’ dismay, however, Dongha doesn’t weigh enough for them to suck his blood! As they shower their unsuspecting new housemate with food and attention to fatten him up, have they gotten too attached to their would-be prey? And is there more to sweet, naive Dongha than meets the hungry vampires’ eyes?

In an alternate version of early 21st century Japan, the Tokugawa Shogunate has remained in power for over 300 years. In this reality, student councils are tasked with oppressing schools. Yagyuu Muneakira is a high school student who rebels against his student council with the help of girls who've had the names of famous samurai heroes passed on to them.