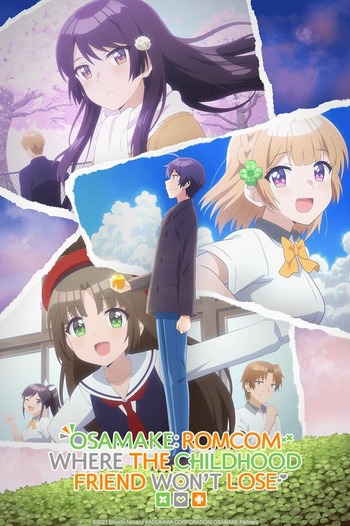 If you're looking for manga similar to Osamake: Romcom Where The Childhood Friend Won't Lose, you might like these titles.

I like romantic comedies. However, romance doesn't develop like that in reality. There was once a time where I thought that. Encountering a girl who fell from the sky, my school life changes with a clang.

Turning the Tables on the Seatmate Killer

Yuuki Narito's new seatmate Yui Takatsuki is the notorious “Seatmate Killer,” who strings guys along before breaking their hearts. But Yuuki's so clueless he might be immune to her charms! And so begins a fierce competition between two seatmates in this hilarious rom-com.

High school student Hojo Saito married his classmate, Sakuramori Akane, the girl who’s his worst enemy in school. “If you tell the rest of the class we’re married, I’ll kill you” “I don’t want them to know either. There’s no point in that.” Their newlywed life wasn’t going so well, and they were constantly at odds. However, as they progress through their daily lives, the distance between them closes, they have more enjoyable moments together, and they gradually come to understand one another. Saito learns about Akane’s cute side, which he never saw before, and Akane gradually began to recognize the feelings that she’s been keeping inside…

The Walls Between Us

“If you want a boyfriend that bad, I’ll go out with you.” Growing up next-door neighbors, Reita Kikuchi and Makoto Sakurai’s parents are friends, and the two of them have known each other forever. But one day Makoto is suddenly thrown into a relationship with that narcissistic and self-absorbed playboy, Reita—her old childhood friend!

Haru Tsuwabuki must successfully confess his love to one of 420 girls, or he will die (in more ways than one). However, as soon as he enrolls, he is derisively labeled a lowly "parasitic biting insect," and his adolescence descends into darkness. One day, Haru meets Miyako Dokuutsugi, a beautiful girl with the worst misfortune at the academy. Haru's life descends from darkness even lower into hell.

When high schooler Ryou Takamori steps in to save a girl on a crowded train, he never expected her to be his childhood friend Hina Fushimi. Though the two of them sit next to each other in class, they haven't spoken since middle school—but this heroic act may give Hina the push she needs to shorten the distance between them!

A spin off based on Ai's usual antics of "trying to get closer to Ta-kun" from even before affiliating herself with the Jien Otsu club.

The childhood friends Akkun and Nontan are boyfriend and girlfriend. But Akkun is always saying ridiculously harsh things to Nontan as well as being cold with her and is frequently moody. But that’s just how Akkun expresses his love for Nontan. This is a high school love comedy about Akkun and Nontan, who doesn’t seem to care at all about how Akkun acts toward her.