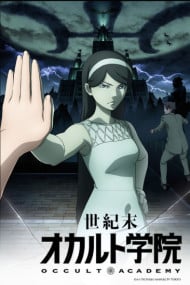 Dear lord ive become such a raging critic.  I guess I am realizing how valuable my time is.  This anime has a low rating, for a reason.  For this anime I have decided to add a more structured beginning section.  This is because I am starting to see that even bad anime have something I really like about them.  Therefore I will explain what I liked, and what I did not before the regular breakdown rather than putting generics into the specific categories. WHAT I LIKED:  -beautiful scenery and artwork (I wish this could have been done in Owari no Seraph)-solid animation, not crazy good, but nothing was crazy bad-character design, might seem bland to some, but again just very solid-voice acting.  its hard to tell for me, because they speak japanese, but they all seemed into it with the exception of that stupid black witch. :P ug WHAT I DISLIKED: -13 episodes. . . is this bad? no, but they put fillers in 13 episodes. . . *facepalm*-no truly lovable characters-humor was aweful-didnt feel important, even though the ending was epic (main storyline was fragmented due to fillers and small # of episodes). to expand on the last point as well as the first in the dislikes, a 13 episode anime can be good.  I have seen them, but its a matter of having the right number of episodes for the story you are telling, and the correct pacing to not miss detail but not leave your audience bored. Story:  Interesting premise, however they diffused the potential of the premise with semi fillers and random happenings that all fall into the category of "occult".  They basically used "occult" as an excuse to do whatever the hell they wanted. Now the semi fillers had core storyline in them, but in a 13 episode anime, you dont have time for fillers. Animation:  I liked it, as I said before, this anime felt. . . solid, not spectacular, but the assurance that it gave in the art and animation was comforting. Sound: nothing notable at all Characters:  kinda meh, overly emotional, and very stereotypical.  Heavily blown out of proportion.  Overall:  I would not waste your time with this one.  it looks interesting, but falls through pretty bad. its not an anime that I would say "you have to see this one to be a true anime nerd"

Story: Occult Academy starts off with a lot of promise, hooking viewers in with a creepy yet interesting beginning about a girl entering an occult school after her father’s death and then witnessing strange occurrings along with a guy falling from the sky. The second episode elaborated the main point of the show and I was quite fascinated and thought the series held potential. Then it crashes and burns starting with episode 3. There were fillers galore until about the 11th episode where the plot picked up again and actually got interesting even though it was somewhat strange and had a disgusting unnecessary makeout scene that looked like it belonged in a hentai (if you’re not into saliva dripping tongue-action make-outs, the second there is a kiss, avoid looking at the screen for about a minute). The fillers were dull and brought down the content of the series. The anti-climatic ending was also a huge disappointment. The show held such potential with its few episodes of actual content. Had this maybe been a 5-episode series and the ending not been as lame, this would have been rated much higher. ﻿Animation: The animation was quite lovely. It was toned down but the colors had a nice pastel glow. The more spiritual art was very creepy and heightened the scene, adding a layer of suspense and shock. Animation of the characters and background were clean and well done. The occult aspects were done with a darker palette and were a nice contrast to the more serene surroundings. The movement was dynamic and fluid. Not much bad to say about the animation. It wasn't sparkly, shiny, and vibrant which was a huge plus since it was very well suited to the series and not quite generic. Sound: Highly generic and even inappropriate at times. The soundtrack was lackluster and forgettable. There were some scenes where the scores were actually kind of lame and detracted from the mood of the situation and left me feeling kind of confused. The openings and endings were kind of catchy, but again forgettable. However, I did enjoy the 3 second intro music. Had the rest of the music been more on par with that, maybe the show could've been more enjoyable. Characters: Not a whole lot of good or even decent characters in this anime. Maya was thankfully the glaring exception to this. I absolutely adored her character. She is the reason for the high score. Rather than being a stereotypical weak heroine who trips on her own two foot, cries at every turn, is obsessed with getting a boyfriend, refuses to hurt enemies because that would be “mean”, she instead is strong, independent, unwilling to put up with selfish, irresponsible, and idiotic behavior of others, and would instead attack head on when placed in a dangerous situation. Rarely does she hesitate to take action unless thoroughly shocked but even then, she recovers quickly. She exudes authority and makes it clear that she is not someone who is easily messed with while still being kind and understanding. Her character was the main reason why I put myself through the entire series. The other characters lack merit and are a huge step down from her. Bunmei was an annoying, shallow, cowardly, selfish, and disgraceful excuse of a human being who only redeemed himself at the very very end. He continually took off running when faced with adversity even if that meant leaving behind a fellow comrade who would not have abandoned him because only his safety meant anything to him, fell for a vapid, shallow female, was easily manipulated, lied time and time again, and kept promising to be helpful yet rarely ever was, meaning that not only was he thoroughly unreliable but also a pain and someone who I wished was not a main character. His “tragic” past does not excuse his behavior and does not even explain any of his flaws so though I felt some sympathy, I still strongly disliked him. He is one of my most loathed characters which is quite a feat. The other characters weren’t that great. There was the idiotic, empty-headed, slutty bimbo who cried, tripped, and only annoyed me with her pathetic and shallow appearance. There was the annoying, idiot friend who’s voice was so shrill and grating that I seriously wished she would just disappear and never be seen again because all she did was beg to help but just get in the way and cry about her glasses. I did however enjoy the presence of the vice principal that was quite amusing. She added much needed humor. The rest of the cast was okay and not too annoying but they were mainly stereotypes and so even though they were decent, they were generic and not unique. They just simply lacked presence. Overall: A lackluster anime that held promise. I really enjoyed the first two episodes and the last three episodes except for the anti-climatic lame ending. It was rather generic and dull with the plethora of bland fillers in between. Watch the first two episodes and the last three but there is no need to waste your precious life on the rest of the series.

The story is really good and well done. Lot of science, magic and supernatural events. Some parts are hard to understand because of scientific words or my knowledge. If you like monsters, poltergeist, any occult things then you sure will love this serie. Quite too short, hoping for a second season At first I thought it was a bit boring cause of how Maya was drawn but no, she don't need big eyes or any others feature. No wonder she became the principal of the academy, also a student! Bunmei looks like a uchujin with that hairstyle. It's great there's a musician rocking out there in the group. It make them more various and interesting.  I like the song also and never thought it was sang from people I know.  Some character really pissed me off and some are so....idiot but any serie has one. Anyway, her way to act is kinda hilarious. So it save  This is a short review but I hope it helps since I'm not good at all 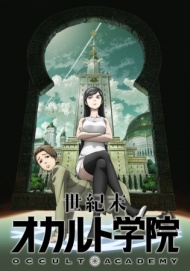 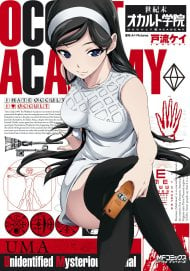