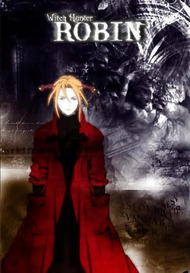 Have you ever heard the reviews for Final Fantasy XIII, where they say "After the first 4 hours, it's pretty good."? Witch Hunter Robin is kind of like that. After you get past the first couple episodes, you get a pretty good show.  Story: When the first 10% of an anime is slow and boring, its usually safe to say the rest will be slow and boring. Not so with Witch Hunter Robin. After the first few episodes, it picks up speed, action, and drama, enough to forgive the initial slugishness. There were parts that were a bit confusing, especially during earth-shattering plot twists. Some of the plot is explained with just enough detail that the viewer can piece everything together. Other plot points are explained at length, which makes for some interesting pacing and overall depth to the show. Where WHR loses points for story is the initial episodes and some of the more unnecessary dialogue that seems to be used as filler. Animation: WHR is now a decade old. However, the animation holds up pretty well by today's standards. While Sunrise, the animation producers for WHR, are more known for space and mecha animes, they did a great job with the "craft" of WHR. And the opening song animation, so good.  Sound: What is up with Michael's keyboard? I'm typing right now, and I swear, my computer doesn't sound like that. Maybe Japanese keyboards sound like banging spoons on a desk; it's the only explanation.  Aside from that particular sound that just seemed off, the rest of the sound department did pretty well. The opening and ending themes were definitely suited for WHR, giving a melancholic feel to the already dark tones.  Characters: The main characters, the hunters of STN-J, are well-defined and given just enough backstory to make them interesting. Even Amon, who's main thing is that he's dark and mysterious, gets a background subplot. There were some memorable characters in the side cast as well, which I found refreshing after watching many shows where the side characters are basically scenery.  Overall: Definitely a good show. You may have to force yourself to get past the first couple episodes. If you can make it to Robin getting her first pair of glasses, you're in the clear.

Witch Hunter Robin: This is personally my favorite anime. this anime has a lot to offer however, I DO NOT RECOMMEND IT AS A STARTER ANIME OR TO ANYONE WHO IS STILL NEW TO THE SCENE. This show is very deep and the characters are complex and very well developed, by the third episode you are already very aware of everyone’s personality and mannerisms. some of the characters are a bit cliché but the main ones are unique. this show is very disconnected until the very end. each episode is of its own maintaining just subtle connections but enough for you to realize there are things going on behind the scenes. one interesting factor of this show is how you don’t feel like you missed anything. many animes begin mid storyline or something like this; so three best friends who are already big heroes get sent on a mission. you having already missed their previous quests, origins and such, need to pick up that information later into the series, possibly through a wasted flashback episode. In this series you come in just as the main character’s story begins and you stick with them through it till the end. This show is sad and deep but every moment you watch you get more and more in touch with the characters inner thoughts and realize why everyone feels the way they do. STN is where this story takes place. it is a group set on tracking down witches with dangerous powers and capturing them. now witch may bring to mind an old lady with green skin and a long crooked nose, but in this show all it means is someone with magic or rather supernatural powers. the STN developed a special liquid for rendering witches powers useless. they have bullets containing this liquid and this is how they disarm and capture the witches. after the witches are captured they are collected by the powerful agency known as “the Factory”. The main witch hunter is Amon. He is dark and mysterious and seems to want nothing to do with anyone but capture witches, and he does a damn good job at it too. everything is in order at the STN until a new hunter is sent over. a very young girl named Robin. She is shy and just wants to be accepted but she has an inner sadness as well. the whole catch is that, she herself, is a witch. A witch hunting witches doesn’t go to well with anyone at the STN. after her first mission she accidentally unleashes too much of her power and ends up with her getting ostracized by everyone at the STN which doesn’t help her with making friends at the STN. but they don’t give up on her and Robin Works at it and begins to move up in the ranks and make friends. The STN gets in there groove and Robin and Amon work well together even though he will barely acknowledge Robin. But after it all, The STN discovers a secret that shakes the very foundation the stand for. Robin and The STN have to save the day but it is not so simple when they realize what they are up against. Unfortunately, the show is very disconnected on face value, but it is very deep under the surface. some episodes address such historical events like the Salem Witch trials and others. and when the show begins to actually get connected you have learned so much about each character that you are leaning forward with each step they take waiting to see what they will run into. This show is unlike any other and it is more serious than your average anime. if you have the patience to watch it and get hooked you will love it. it has a lot to show you and teach you. Witch Hunter Robin has some of the most developed characters of any anime and that makes it more fun to watch than your typical, “fighting to save the world anime”. Enjoy Witch hunter Robin in its Entirety and you will see exactly what I mean!

THE STAFF - Animated by studio Sunrise, which is very good in making shows full of cool robot action. But since this is not a mech show, it is not a good show.- Directed by Murase Shuuku, who is mostly a character designer than a director. He did a nice work in Ergo Proxy but other than that he is not someone important. This was so boring, I will just stick to basic information because of it. 1) The emo characters. Although the term is a bit off since everybody was mostly emotionless and not exactly cutting his wrists. Anyways, the characters in this show don’t show much emotion. I guess being an uncaring prick was a trend back then. But beyond that, how can you like such emotionless characters unless you are an emo? I sure didn’t care about them; they quickly became boring. They are not even complicating or too developed. Plus, they are treated as expendable units too; the heroine is a witch brainwashed to hunt her kind and her kind is monster of the week mooks. Her boss is a scheming bastard and the only plot twist in the entire show. And… that is pretty much all there is to them. One could say “How about Robin gradually realising she is being manipulated and rebelling?” Oh sure, that counts. Too bad it is ALL TOO BASIC AND EXPECTED to matter. Do you know how many anime with assassins there are and the premise is exactly the same? Requiem for the Phantom comes to mind above all and although I was also bored with it too, it still had the same premise with a lot more meat to it. Not to mention Neon Genesis; everybody was emo there and yet in the same amount of episodes you would be offered a hundred times more stuff about each one of them to care. 2) The story. It is as I said about an organization using witches to hunt other witches, which are considered dangerous for humanity. And if you think that is all it takes to fill a 26 episode show, then you have nerves of steel. For 90% of it is almost stand alone missions of hunting some mook monster with anti-witch guns and watching Robin being all emo. It gets boring very fast, as the characters are emotionless and the plot is slow, simple and predictable. The only worthy thing in it is Robin’s gradual turn heel, but even that happens in a snail slow speed and eventually it feels expected and too simple to care. 3) The action. It is nothing great in terms of choreography, plus Robin gets out of each situation with minimum injuries. This is no Mazinger Z to expect some cool robots blowing stuff up in every episode and in a storyless fashion. As for the super-powers of the show, it is nothing Darker than Black didn’t offer in a lot more variety. 4) The production values. They are nothing great in terms of animation, OST or artwork. There are many other shows that used as much dark as possible to show how emotionless and depressed everybody is, but that is hardly enough to deem the show worthy. I mean just look at Robin’s favourite hairstyle. Isn’t it weird; almost ridiculous? And if I wanted to watch emo people dressed in black, I would be watching Naruto Shiippuden instead of this; more action and more variety in themes too. In all, this show is a fail in all aspects. Not because it has a terrible story or crappy production values. It simply came out in a time where most other anime had all its (few) interesting elements and a hundred more on top of them. I do not recommend it to anyone because it is all too basic, dull and lasts a lot more than it should. And now for some excused scorings. ART SECTION: 5/10 Analysis: General Artwork 1/2, Character Figures 1/2, Backgrounds 1/2, Animation 1/2, Visual Effects 1/2 SOUND SECTION: 6/10 Analysis: Voice Acting 2/3, Music Themes 2/4, Sound Effects 2/3 STORY SECTION: 3/10 Analysis: Premise 1/2, Pacing 0/2, Complexity 1/2, Plausibility 0/2, Conclusion 1/2 CHARACTER SECTION: 3/10 Analysis: Presence 0/2, Personality 1/2, Backdrop 1/2, Development 0/2, Catharsis 1/2 VALUE SECTION: 1/10 Analysis: Historical Value 0/3, Rewatchability 0/3, Memorability 1/4 ENJOYMENT SECTION: 1/10 Analysis: Art 0/1, Sound 0/2, Story 0/3, Characters 1/4 VERDICT: 3/10