Legend of the Galactic Heroes: Die Neue These - Videos 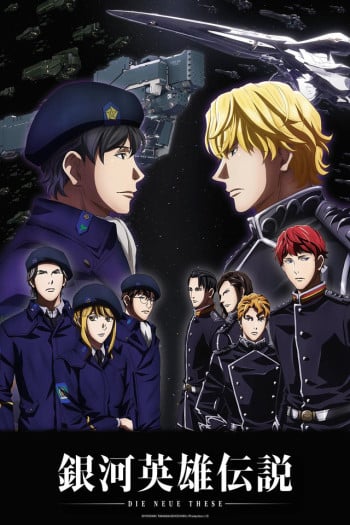 Legend of the Galactic Heroes: Die Neue These Episode 2 - The Battle of Astarte

The Free Planets Alliance counters the Galactic Imperial Navy's advance in the Astarte Starzone, still divided into the 2nd, 4th, and 6th Fleets to surround the latter on three sides. The Alliance top brass are certain that their victory is assured, but 2nd Fleet Deputy Staff Officer Commodore Yang predicts the enemy's attack on their divided forces before their encirclement is complete. He offers Vice Admiral Paetta a plan to counter this possibility, but...

In the Eternal Night

The Battle of Astarte

Birth of the 13th Fleet

The Capture of Iserlohn (Part 1)

The Capture of Iserlohn (Part 2)

The Verge of Death (Part 1)

The Verge of Death (Part 2)

Anime-Planet users recommend these anime for fans of Legend of the Galactic Heroes: Die Neue These. All available to watch right here, right now!

The tragic story of Char Aznable, the ace pilot known as the Red Comet, and his sister Sayla Mass unfolds against the backdrop of the events leading to the One Year War. The Zabi family's rise to power, the birth of the Principality of Zeon, the early days of famous aces such as Ramba Ral and the Black Tri-Stars, the development of the revolutionary new...

The huge Katvana Empire is at war with the neighboring Kioka republic. In a corner of the empire, a young man is about be caught up in the flames of war. His name is Iwata Soroku. He's lazy, a philanderer, and he hates war. He's about as far from a soldier as you can get. On his way towards the next stage of officer's qualification exams, he and his childhood...

Both anime have big brain military action. Legend of the Galactic Heroes works on a larger scale of action while Alderamin on the Sky is more close up small scale battles--at least smaller than space since this anime leads towards fantasy rather than sci-fi. Legends of galactic heroes had a big mix of political and battle tactics, with a larger focus on politics. If it was the battle tactics that got you going in Legend of Galactic Heroes than I highly recommend Alderamin on the Sky. They cover that in just about every episode. Sure, it still touches politics here and there but battle tactics are this anime's main focus. I say if you liked either of these anime, that you go give the other a try. Personally, both are in my top favorite anime.