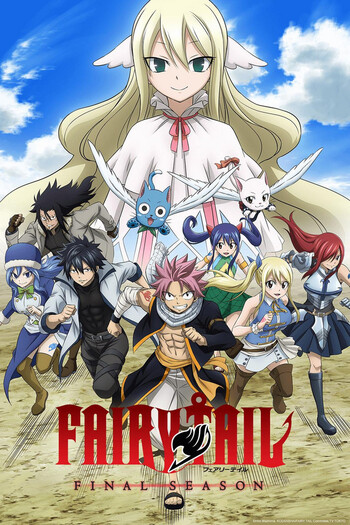 In a world where magic is everything, Asta and Yuno are both found abandoned at a church on the same day. While Yuno is gifted with exceptional magical powers, Asta is the only one in this world without any. At the age of fifteen, both receive grimoires, magic books that amplify their holder’s magic. Asta’s is a rare Grimoire of Anti-Magic that negates and repels his opponent’s spells. Being opposite but good rivals, Yuno and Asta are ready for the hardest of challenges to achieve their common dream: to be the Wizard King. Giving up is never an option!

The story follows the skilled hunter Kikuru Madan, who has decided to retire out of fear of wasting his youth. One day, a guild staff member suggests that he go on a quest with a new female martial artist named Hitamu Kyan. However, she keeps getting hit by monsters one after another.

Aster is a young boy who dreams of becoming the greatest mage in the kingdom. Only one problem–he can't use any magic! Luckily for Aster, he receives the incredibly rare five-leaf clover grimoire that gives him the power of anti-magic. Can someone who can't use magic really become the Wizard King? One thing's for sure–Aster will never give up!

Vermeil in Gold: A Desperate Magician Barges Into the Magical World Alongside the Strongest Calamity

Follows Alto Goldfield, a student at a magical academy who aims to become a master of all magic. However, when he is on the verge of failing a class on summoning magic and in danger of being held back a year, he finds an old summoning grimoire. Following its instructions, he inscribes a magic circle, and ends up summoning a powerful demon named Vermeil, who was sealed long ago, and makes her his familiar. However, the voluptuous Vermeil occassionally requires magical energy from Alto, which she claims by kissing him deeply.

The second season of Edens Zero.

The rookie Buster Beet, his childhood friend Poala, comrade Milfa and friend Kissu are still on a quest to put an end to what humans call the "Dark Era" - a time when demonic Vandels destroy cities and lives aplenty. On a voyage abroad, the ship is attacked by a powerful Vandel known as the Dark Dungeon Warden Vaus and the remaining crew washes ashore in a distant land. Is it there that Beet and friends encounter twelve-year-old Leon - a powerful Tengeki user whose powers strengthen Beet's fighting ability - and the town of Shantigo. Together, they will combat the forces of the Vandels and try to put an end to Vaus.