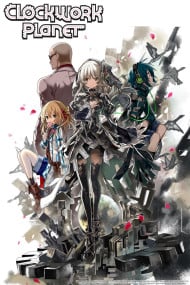 Clockwork Planet is bad. Really bad. I daresay that there will be others who disagree on this point (I've watched some REAL SHIT which has its enthusiastic fans, and I don't necessarily mean to dissuade them from their opinions) but leave it to Xebec to, on this occasion at least, create a series which is simultaneously derivative and which sabotages its own potential. On the face of it, Clockwork Planet has a fun but silly premise; after a scarely-explained apocalyptic event, the world is rebuilt from scratch, in cog-and-gear form, by the mysterious Y. Some time later, an automaton with a hot female body crashes through protagonist Naota's cieling and, using his auditory skills to find the problem in her mechanism, fixes her. She becomes his servant, and the two eventually meet a young meister (person who does gear things) and her bodyguard, who enlist them in stopping the military from dropping an entire region of Japan into the core of the planet. Under other circumstances, this might make for a simple but entertaining series full of clockwork people fighting other clockwork people. A more ambitious team might even pick up on the themes of authenticity and embodiment which the show occasionally picks at before putting them down abruptly in favour of more shooting at faceless robots, and endless repetitions of the word 'master'. These aren't other circumstances. Essentially, the show feels about eight years older than it really is. Events, character motivations and visual elements seem cobbled together by focus testers who seem to have taken the idea of working together bits and pieces, cog-like, to heart. Everything is here, from an inexplicable beach segment to a little girl character who seems to have little to no personality beyond being 'cute', but who paradoxically seems LESS cute because the show tries so hard to make you think that she is. From the animation style to the gross oversexualisation of most of the female cast (RyuZu forms a contract with Naota by enthusiastically sucking his finger, for some reason), everything feels cheap and tacky. Attempts to engage in dark or psychological matter end up seeming forced and are dropped so quickly in favour of robots shooting blandly at each other that they're almost not worth bothering about. In one scene, one of the female leads has a breakdown in a lift in which she shakes, punches things, laments and laughs uncontrollably within the space of what feels like ten seconds, which might actually be the most Clockwork Planet thing about Clockwork Planet; things happen quickly and without much thought put into them. There's not a whole lot else to say. The MC feels dime-a-dozen, the kind of sort-of-perverted, actually-genius, optimist-to-the-last young boy protag who you've seen countless times already and wasn't great in any previous iteration. Most of the rest of the cast is uninteresting and forays into the realms of romance prove unconvicing at best, creepy at worst. Among other things to look forward to are a bizarre radio transmission which accuses a young girl of having a 'sad hole' in need of 'cocks', a villain who (again) might have been an interesting look into concepts of authenticity and humanity elsewhere but who is sorely underdeveloped, and a lack of any kind of real emotional investment, leave this as possibly the worst so far of what has actually been a pretty disappointing year for anime up to this point, IMO. Tl;dr, Clockwork Planet seems like it might be a bit of silly fun but is actually misjudged when it tries anything new, and dull and derivative at every other turn. Bland characters, bland villains and an ultimately woeful experience. Avoid.

Positive *Can I even find anything that I liked in this anime? …….. Anchor was quite cute. ……… Moving on. Negative *Because my God that was literally the only spark of light that I saw in this thing that calls itself an anime. But CP was bad on so many different levels. First of all, I know that in fantasy/sci-fi anime you’re basically free to do whatever the hell you want. But the whole concept of CP was so triggering that I couldn’t ignore it. So if I got this right than the actual earth was dying and so this “scientist” by the name of Y build a new world completely out of gears? That, literally, makes no sense at all. Just like how in the final episodes, suddenly gears start appearing out of thin air. Again I know that this is a fantasy/sci-fi anime but this was just so irritating also because we never learn anything about how this world came to be or its creator. For a video review, check out my Youtube channel. Link on my profile page.  *Which seamlessly brings me to my next point of concern being that CP explained nothing. Not only do we never learn anything about how the gear world came into existence or who Y was but also in terms of the story itself the anime fails at explaining anything. The whole coup with the giant electromagnetic weapon and its leader and every single goddamn thing in this anime just happened. Where did the leader of the coup come from, what’s his backstory, his motive, where did all these flashbacks between him and our MC come from. This anime was just a huge pile of random events thrown together in a story framework that wasn’t even there. *And last but certainly not least, you had to make the MC a pervert, you just had to. It wasn’t enough that your entire anime fell apart because of the nonexistence of any logic in it, you had to go and use this freaking stereotype which I have seen so many times and honestly I am sick and tired of seeing this kind of dumb, pervert MC’s who actually don’t contribute anything to the story. Conclusion So as a conclusion, CP was just bad. I can’t even say that this was a disappointment because I wasn’t expecting anything from it. But still this anime isn’t worth your time, it definitely wasn’t worth mine and I was so happy when it was finally released from its misery. So overall I’m going to rate Clockwork Planet at a miserable 1 stars. This is an anime that belongs in a far corner of the anime universe where nobody can find it because if I look at the ratings that I already gave this year than this is the worst anime that I had seen until now this year. 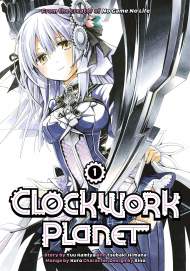