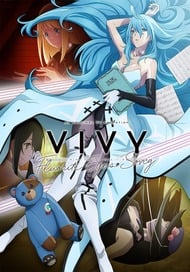 NiaLand is an A.I. theme park that brings dreams to life with science. Vivy, the first autonomous android to work there, has hopes of making people happy with her singing. One day, an A.I. teddy bear named Matsumoto appears, claiming to have come from 100 years in the future—where a war between A.I. and humans rages. Their century-long journey starts now!

Vivy is a rollercoaster. Not one of those sleek, smooth, modern roller coasters, more like a poorly maintained rickety ride that leaves you with bruises, whiplash, and a concussion after tossing you around painfully like a ragdoll. The anime ripped through the spring 2021 season like a tornado, trying to build a massive, complex world with a twisting, turning plot, but in the end it only left me asking one thing. Why? The decisions made by the creative team for Vivy were at times baffling. It seemed like an anime made by a committee rather than one with a single vision. It seemed like they had a checklist of things they wanted to include (e.g. Artificial Intelligence, Time Travel, Space Flight, Singing, Hollywood style choreographed action sequences), and they just threw them into the story without regard for how they would all fit together. The arc based storytelling with huge gaps in time between arcs made it difficult to see the big picture. An arc would run its course, and I’d be only left wondering. Why? What was the point of all that? How does that actually help with the mission? Each arc would introduce an entirely new set of characters, an entirely new setting, an entirely new mission with little to no continuity with what they did before. Not even our lead character could remain consistent (for spoiler reasons); the story was just set adrift at sea with no anchor. And once the arc ended it would move on to the next one, with only the hope that whatever happened actually helped the protagonists’ mission to save humanity… somehow. With so many characters coming and going, I had a hard time keeping track of them, let alone care about them. Why should I even care? Even the music was a disappointment. For an anime that centers around “singing from your heart” or whatever, the music was mostly forgettable. Satoru Kousaki, accomplished composer for the iconic OSTs of The Melancholy of Haruhi Suzumiya and the Monogatari franchise churned out a soundtrack as lifeless as the android protagonist. The music lacked the virtuosity of a show like Your Lie in April or the diverse creativity of a show like Carole & Tuesday. Sure, the OP was catchy after a few episodes but it’s not one for the unskippable list. Why am I even watching this show? The animation. It was pretty good. Not quite at the levels of a show like Demon Slayer or Violet Evergarden, but at least it was among the best I’ve seen for a TV anime. Studio Wit did a great job, but animation alone can’t carry a show. I’ve tried to skirt around spoilers but hopefully there’s enough content in my vague generalizations to express my opinion. It was a chore to watch. I’ve seen so many discussions about how this is an underrated gem and one of the top anime of the season. It even managed to crack the AP Top 100 (accounting for prequels/sequels)! Throughout the show I was just waiting for that “wow” factor, for it to all come together. It never did.

Vivy is yet another one of those time reset anime where the point of the plot is to undo the plot. Something really bad happens in the future and a program is sent back in time in order to prevent it. Therefore it’s the done to death power fantasy offered by this concept: Are there negative consequences in your life? Keep going back in time until there are none. Despite the show trying to mitigate that by making it seem like the time travel part can only happen once, or that the characters are not allowed to fix every negative thing so the future won’t become too different, in the longrun it’s all bullshit because they clearly go back more than once and it doesn’t matter what changes they make to history, since the event they were trying to prevent wasn’t caused by the stuff they were preventing.Despite that, the anime managed to stand out for many at the time of its release. Artwork and music were above average and every story was dealing with interesting sci-fi concepts regarding artificial intelligence. Every story was also very tragic, as many bad things were happening to the people involved with the events that were supposed to be leading to the tragedy in the future. This mix of elements is especially effective on easily impressionable people who will see the whole thing as very emotional, and won’t about the nonsense in the plot. As for anyone who cares more about good writing than how much something makes you cry with its overbearing theatrics, the show will fail him at everything besides its production values. -It’s very hard to care about any of the characters since they change in every arc. You are given no time to like them before they get killed a few minutes after their introduction. The first episode for example begins with a massacre of people that mean nothing to you. They are background nobodies and yet the plot assumes that you will care to see them getting saved via time resets. Even though they mean nothing to you.-The science fiction concepts are not explored. They are mentioned, they get a superficial infodump about what they are all about, and are then thrown away. Every arc is very short, isolated from the other arcs, and with its own themes, therefore nothing gets any significant exploration. -The overall plot is not as elaborate as the show wants you to think it is. Despite showing you how the timeline is altered with every change, the arcs are disconnected by very long timeskips where stuff chance out of screen and in whatever way it suits the plot. There is no actual continuity, since you never feel like whatever the heroine does in one mission carries over to the next one. -The main heroine is not some deep or memorable character. The show is just overselling her by being drawn as a hot sexy waifu with boobies that are half exposed most of the time. Other than that she’s an emotionless robot that changes several times because of amnesia, time skips, or because she’s dragged around in missions by the teddy bear robot and not because she has any control over her actions. Essentially she’s a plot device, following a computer program, and she doesn’t develop naturally like a human being. In fact she doesn’t develop as much as she gets rewritten, since she gets multiple amnesias that wipe her so-called progression. -The finale is basically rendering pointless the entire series, since the changes in the timeline didn’t stop the disaster in the future. Also the main antagonist was so uninterested in achieving her plan, she just lets the heroine to do whatever she likes. Also there never were any stakes because the characters can go back in time again in case they fail. It’s a time travel story, what did you expect? Negative consequences that can’t be undone? Thus, as a whole Vivy is a show about forgettable characters, superficial themes, no actual plot progression, or actual character development, and a finale that essentially tells you there never was any pressure of time or danger of losing. It’s another one of those throwaway shows that you might like the first time you watch it, because the artwork looks nice, it has a hot sexy waifu, and sad things happening all the time. But there is no replay value once you realize how lazily written and superficial it is as a whole, and won’t stand the test of time for most. 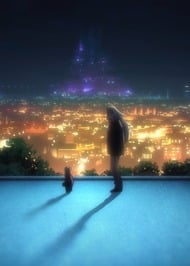 Vivy: Fluorite Eye's Song - To Make Everyone Happy With My Singing