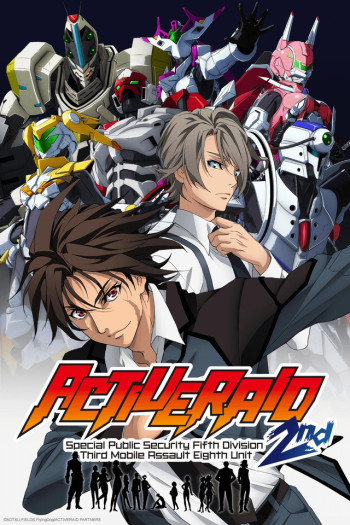 The first season was enjoyable. The plot was rubbish and the characters were farcical. But it was well presented, humorous and energetic story. It took itself lightly, encouraging the viewer to laugh at all the absurdity. A girl below the age of maturity Asami Kazari joining an elite task force of the police, that is run by another very young but not too sharp woman. Watching Rin drive her miniature hatchback car with the giant Yasuharu crammed into the passenger seat was funny. The Mecha suit dressing corridor was a blast! Command centre in an old style train, not even the Maglev train. The hammy dialogue. The NEET antagonists. Lots of stupid fun.

Maintaining a parody over two seasons is perhaps too much to ask. By episode ten into the second series it has the feel of show starting to take itself seriously. This is something that can’t work. As with Date a live and the sequel when a pure parody turns serious it completely falls apart. Watch the first Active Raid season and give this a miss.