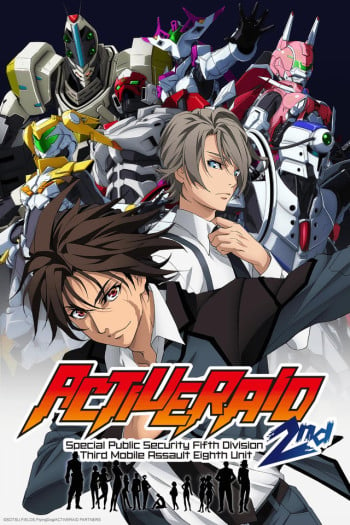 The show revolves around criminals using robots to save innocents in exchange for years being cut from their long prison sentences.

Nanatsuki finds a file on Nijo's first case with Special 7, and it shows Nijo being held for questioning! What could have happened to bring the straitlaced Nijo under suspicion?

In the year 2001 crime is unstopable at Centinel City, the techno police updates their arsenal with new cars and Technoids. When a robotized tank is hijacked it's time for the techno police to come into action!

With Warlock's trial looming on the horizon, Nanatsuki reflects on the cases he's been involved with as a member of Special 7.

"Labors" are large construction robots that are now being used to commit crimes. To meet the challenge, Special Vehicle (SV) units are established by the Tokyo PD. However, the Second SV unit is a total joke. Determined to change this, Izumi and Shinohara become pilots of the new Ingram 98 police labors, and are determined to change that reputation, with the help of the SV-2 gang of misfits.

Following the events of the first Patlabor movie, after a terrorist attack on a bridge in Tokyo, the whole country of Japan is in an uproar. The Japanese government suspects an attempt by the Americans to destabilize them, but in reality has no idea who is behind the attack. The only clues they have is of a secret organization called the National Defense Family, and the destruction of a United Nations Labor Unit. With time running out, the government calls upon Captain Goto and the Police Labor Force Division 2 to fill in the missing pieces...