A Whisker Away - Reviews 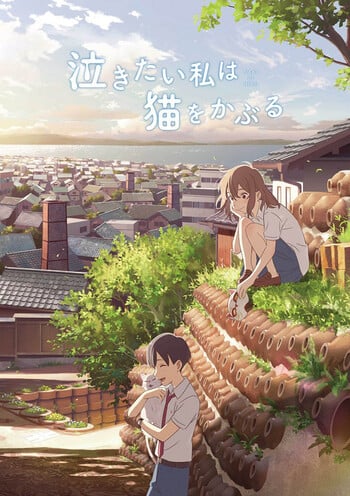 What can I say? A Whisker Away is just fascinating.

Despite some parts of the movie sounding a bit cliche, the movie does handle the cliche very well. It's worth it. All 144 minutes of my time. How can such an animation be so simple, yet so beautifully done? If you could take the time to listen to the lighthearted music in the background, it goes very well with the movie. Even though you're a dog person, you'll still enjoy this. You'll also be able to love and get attached to the characters like I did. Yes, Muge (AKA Miyo) and Kento are amazing people and so are their friends.

Want a cute romance movie? Watch it. Have a love for cats? How about, just animals in general? Watch it. Want a strong, outgoing female protagonist? Watch it.

I laughed. I cried. I am satisfied.

I gotta say this movie I never expected so many crazy and amazing thhings happen. As I haven't seen anyone do a review for this movie, I will be the first to do so. I'll make this a spoiler free review.

As the story shows, Miyo "Muge" Sasaki is a headstrong girl who falls in love with her classmate, Kento Hinode. He takes no notice of her no matter how many times she tries to get his attention. So with this newfound magical secret that she discovered one night, she uses this power to persue him, but will it cost her humanity to get closer to him?

The story itself is pretty good. It goes through the hardships between the characters and the side characters as well. It's giving like a life moral about relationships and hardships, almost like 'A Silent Voice' in a way. Even with Muge as she is shown to be the most happiest and craziest girl. It is nice to show that such happy people like Muge even struggle as well. Even choosing between her humanity and living as a cat. I love how each character has a use, they weren't made for sitting in the sidelines doing nothing.  The movie can be really calming and gives off a Studio Ghibli vibe to it. It brings many emotions to the movie, there were times I couldn't stop laughing, awing at the cuteness or I was just dumbfounded at the craziness in the movie.

The animation is gorgeous. The camera movements were outstanding and each detail was beautiful drawn out. Each colour was vivid it has so much detail and movement. It is like an eye candy. Like I said before, it even brings out the Studio Ghibli vibe for many scenes, I won't explain too much as I wants this to be spoiler free.

It brings out so much life to the anime and in a creative way. I really enjoyed it and would recommend to watch it.

(I'll come back to the music since I didn't pay too much attention while watching the movie.)

(ﾉ◕ヮ◕)ﾉ*:･ﾟ✧ Get your tissues ready!

A Whisker Away takes you on a heartwarming journey about a brave young girl with past hardships she keeps to herself trying to be who she feels she needs for those around her. This production keeps you captivated with the artwork and well planned camera angles without getting distracted by needless details. The story is easy to follow with a beautiful blend of character development not to mention the way they end the movie is PERFECT, it doesn't leave you frustrated at end of story interactions like some movies/series do. Hint: Don't stop after the "closing scene" you'll miss the closure that's creatively tied into the ending credits. (;

While this a newer release on Netflix, I see a LOT of people have it in their "Want To Watch" definitely time well spent so I highly recommend putting this little charm under your "Watched" (and loved <3 ) section.

(=^･ｪ･^=) This anime was something I have been looking forward to watching since the beginning of June. It was better than what I expected on some parts. The one thing that I didn't like about this anime was that Muge, the female main character never appreciated what her childhood friend had did for her. Muge was too obsessed with someone who showed disinterest in her. Other than that it was really a tear-jerking anime.

WARNING:
THE FOLLOWING REVIEW IS SUBJECTIVE AND MAY OR MAY NOT OFFEND YOU. THIS SO CALLED "REVIEW" MAY HAVE A FEW SPOILERS SO BE WARNED.
TO TOP IT ALL OFF, IF I FIND A FAULT WITH MY REVIEW I WILL EDIT & CHANGE IT.

NOTE: YOU ARE FREE TO CRITICISE ME OR, SUGGEST HOW I SHOULD REVIEW IN THE FUTURE

I have to put this out clearly before delving into the meat of this review, I’m not the biggest fan of slice of life or dramatised anime shows or movies but, I appreciate magical realism wherever portrayed - exception being Studio Ghibli (though I despise Whisper of The Heart). That being said, this show specifically made a solid attempt to compromise its slice of life element with that specific motif. It tries to lay a solid ground for the storyline with its central Coming of Age premise. Does it succeed at it ? Does it fail ? Is it worth watching?

The storyline begins off with a very vibrant tone, pulling you in with an everyday realistic protagonist. The context in this case being that the movie draws you in from a very shoujo lens, albeit with strong magical realism. The build up of the storyline is very generic but solidly done. It relies on a strong avant-garde type of slice of life performances but tries to subdue the audience by relying on an other-wordly Ghibli-esque vibe. The real question that begs though: was this form of realism necessary for the conclusion ?

There are 2 answers that can be thought for this.
One being that this is just a metaphorical or imagerical depiction of their mental states, states of these two young-uns who are both in the Coming of Age phase. They’re both struggling to understand and be understood by their environment. In order to escape this very burden, magical realism is brought to the forefront of their scope. The other answer is that this was a cheap usage of realism as it posits no interesting or different outcome for these young-uns. The story could have reached the same conclusion without relying on magical realism but still decides to implement it since it’s a strong exhibitor to attract the audience. To further explore this claim, the cat personifications were somewhat unnecessary to begin with. The conclusion was delivered from the strong foundation it had drawn from the slice of life premise and not the magical realistic one. In this notation, it mostly fails with the latter element and solidly excels in the former.
Maybe for ¼ of the movie’s duration it served some purpose but afore that, it appears to be only beautiful in presentation yet superfluous with the storyline. Overall, the build-up was fine but could have had some better ground. The Coming of Age Romance wasn’t perfect but it works anyway.

There is one similarity that was begging to be drawn from a Coming of Age standpoint, there is a parallel to be drawn from the main protagonist of this movie to the main protagonist of Koe No Katachi ( A Silent Voice). The film makes it apparent from the beginning that this show makes a wild effort to rectify her view of other people. She sees them as scarecrows while the protagonist of Koe No Katachi sees other people without eyes- crossed bandages on people’s eyes. The parallel is….one of them made a great use of that premise while the other completely forgot about it by the end.

This is where the issues start to build up one by one. The protagonist’s point of view is fine and is done skewardly. Lot of the focus of the premise is centred around her and that is completely understandable. But the one mistake that the directors made was dodging the protagonist’s love interest about mid-way through. They were doing a fine job exploring both of these major characters until about 1 hours 10 minutes into the movie, where all his relevance just completely fades away and the narrative completely loses sight of how his relevance is tied with the main protagonist.

This isn’t suggesting that they didn’t present the bond in an ill manner, the suggestion that is being drawn here is a facet: there was another side of the protagonist which the film protrudes throughout half of the movie then completely forgets about it. It’s completely comprehensive that this is coming from a shoujo standpoint but the complaint isn’t solely about the love interest either. The protagonist’s mother is slightly hinted at as well but then left off for good - there is a good reason for her to be relevant to the premise and storyline by that point. Also, they do the same thing with the step-mother who too was explored very well for a certain period of time.

The art style isn’t really impressive when it comes to the drawing of the human characters but it manages to do fine in other areas such as animals and background scenes. The characters look very simplistic, adding a very 2 dimensional feel to the scenes, not really blending well with the background. On the other hand, the animation is fantastic. It could use perhaps a bit of refinement but the film looks gorgeous overall. It drives magical realism to the screen and will surely make you utter the name of the theme itself. There are some moments in the film though, where the character designs tend to shine but there’s also this downgrade of excessive brightness in every other scene.

There isn’t much to say about the soundtracks themselves. They’re very typical slice of life blending soundtracks, some of them are memorable to the core while others just drift past your ears. Maybe it swayed past mine a lot but props to then ending theme. There isn’t much to relay in this section since I’m still an amateur when it comes to analyzing film/anime sound design. The sound design in this case feels natural and attunes to the scenes and animation, nothing spectacular but it’s enough to keep the film running and make a beautiful set out of it.

Quite a relaxing watch but not much of a game changer. If you’re into cats, this film does a mediocre job of implementing that through its premise; however, if you want to sit back and enjoy some everyday slice of life with some Ghibli-esque attempt at turning your eyes a bit towards the scenery, feel free to watch A Whisker Away. Very dodgy characterisation, familiar and okay plot, okay animation & okay soundtrack. It’s a film that deserves at least one watch.

WATCH IT WHEN YOU’RE BORED !