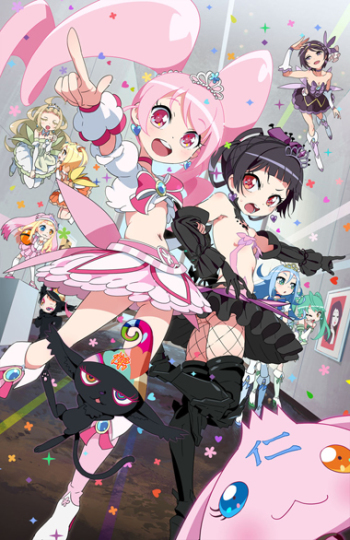 Matoi Sumeragi works as a part-time shrine maiden at her friend, Yuma’s, family shrine. While Yuma is next in line to become the shrine maiden, Matoi is content to pursue a normal life. Unfortunately, “normal life” comes to a crashing halt when she and Yuma find the shrine damaged and Yuma’s parents wounded. Things only escalate as Yuma’s “Divine Possession” ritual aims for, not Yuma, but Matoi, imbuing her with the powers of a god in a fight against evil spirits.

Cocona is a model honor student, cautious and slow to embrace new opportunities. This makes life complicated when a mysterious girl named Papika suddenly appears, fearlessly searching for a wish-granting crystal called the “Shard of Mimi.” When fates collide and they're given the ability to transform into powerful fairy-like beings, where will the dangerous journey into “Pure Illusion” take them?

Both are action-packed mahou shoujo shows with similarly colorful (almost psychedelic even) art and quirky characters. Lots of battles and artsy weirdness in both.

The story set in two places with Precure girls: the heavenly realm Skyland and Sorashido, a city surrounded by nature. One day, Skyland's young Princess El was snatched by a monster of the Underg Empire. Sora Harewataaru, a brave girl who aspires to be a hero, follows the princess into a mysterious hole — and emerges in another world at the city of Sorashido. Sora encounters a second-year junior high school girl named Mashiro Nijigaoka and ends up living with El at Mashiro's home.

Minky Momo in Tabidachi no Eki

It is said that train stations are not only an end and a beginning for many, but also are a place for lost and forgotten objects – and for those who are forgotten. On a rain-soaked day, Minky Momo rides the train towards her final destination and ends up conversing with an old man who is trying to reunite with someone very important to him. After discovering he left his passport on the train, Momo embarks to try to find him and consequently runs into both her parallel self, and a young girl who is in need of both of their help. She has ties to the station, and yearns to find a resolution to her troubles...