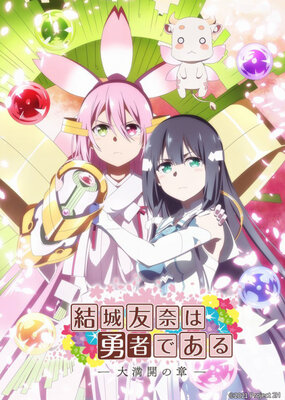 There was a review of this season of Yuki Yuna is a Hero: The Great Mankai Chapter in Anime News Network.  It wrote off the series and the franchise as 'misery porn.'  I seem to see the connection.  The forces of evil are harsh on those girls sent against them, and The Great Mankai Chapter is noteworthy in the rush of red from the magic girl heroes, and this is not the blush on their cheeks.  Each season appears to top the previous level of 'girl torture/oppression.’  And what to make of the third season?  It's simplicity itself. IT'S_EXPLOITATION! Really, when one views the opening theme and credits, you might wonder in this two word summation whether there should be a space between the 'S' and 'EXPLOITATION.'  Read it as one word.  And, if you’re catching my drift (hey!  I’m trying to be discrete here), what are we to make of it?  Maiming girls for the salvation of the world …  that is a good take on The Great Mankai Chapter. There are three arcs in this season.  Of course, one deals with the Hero Club of Yuki, Togo, Fuu, Itsuki, Karin and new girl on the team Sonoko.  For the most part, the girls are in semi-retirement now that all the Vertex have been destroyed (good on paper ... but keep watching), and most of the episodes rehearse key parts of their story, particularly Togo's attempt to be a sacrificial victim and Yuki's mark of the divine curse.  But for the most part, all the work of entering the Forestsize belongs to a new crew of girls, the Sentinels, who go forth to battle the weakened 'Stardust,' the soulings connected to the former Vertex.  The girls' main mission is to reintroduce the 'Divine Tree' into this mystic world.  The troop is led by Mebuki 'Blood n Guts' Kusunoki.  That's not really her nickname, but it fits.  She is the dynamic leader of a team who has its share of blowhards, 'sheep-to-be-led' types, and downright cowards.  One girl, Suzume, faces her fear and is proven strong in the crucible of battle.  But the Sentinels run across evolved Vertex, yellow globular entities which appear to wrack more punch than the previous nemesis.  It's time to get back to the girls of arc one. The third arc comes when these girls have been introduced to the girls who were the original warrior-girls of three hundred years back, when the Vertex started their reign of havoc.   Sonoko brings in an old tome called 'The Hero Annals.'  Apparently Sonoko's several great grandmother was the leader of the first five girl heroes.  But their efforts against the Vertex goes poorly.  For these girls, the prototype Mankai is a three-minute ordeal which rips the girl apart as the brave heroine hangs in to defeat the Vertex.  Two girls on the team die.  One is driven mad by the responsibilities of being a hero with the world not truly supporting them.  For, if these girls are sloppy or ineffective in vanquishing the Vertex, this translates into massive disasters for the rest of humanity.  The heroes get blamed for these losses of human life., and the Taisha (who have gained power in AD 2017, or year one Divine Era,) are no help.  The five-girl team is down to two girls, Sonoko and Yuna's ancestors.  The Hero Annals promises to be an eye-opener to the present (300 Divine Era) team of heroes. As for the technique, the battle scenes are usually the most vivid, but these also are the most bloody.  The themes of gaining the power to overcoming the Vertex having adverse side-effects, that the Taisha is never completely trustworthy, that the girls will suffer unmercifully, make this third go-around more tedious, as there are still 4-5 episodes to go.  Secrets to better handling the Vertex menace, and how Yuki and friends will go forth to battle once more.  But the content is far more darker than ever before (remember the first episode of season one and how Yuki Yuna was so carefree?).  These six girls will have matured far more quickly as they assume a role that few can really comprehend. But the notion of what the world needs is one more innocent maiden to be the sacrificial victim to save the world … it’s starting to get irritating.

Ok so as i said in the previous review the background sounds and the animation doesn't match the content it offers. This time the story focused on 3 groups of girls and it was just confusing to remember all of them. Some felt unnecessary like the leftover heroes and some were quite good like the nogi wakaba team. This season was the final (i hope it is) and the ending is good but it doesn't really match the rest of the series. This season was second to washio sumi chapter. 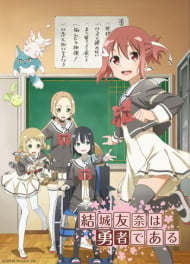 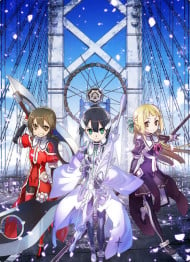 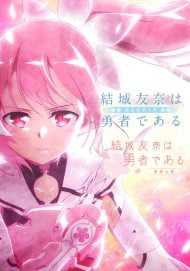