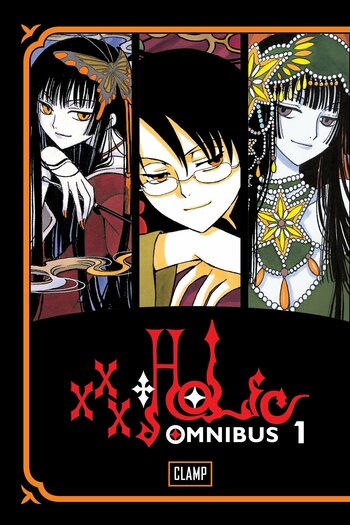 The story line for the most part is the same as the anime, with little things here and there that change which is rather normal for going from print to anime. A couple things though seem to of been changed. The first one is that Watanuki doesn’t feel like he is a total spas from what I have read. He seems a little more put together then the anime series. Yuko on the other hand seems to speak even more and says things that could probably go without saying like for instance, saying that Watanuki’s face looked mad when you could tell right from the picture that it did. Moro and Maro were not as annoying as in the anime (Or else, I could just decide weather or not I read their repeats of other’s words…) Yuko is even more cryptic in some of her answers then the anime, and rather seems to cut herself off once in a while.  It really pisses me off that way.

Now I do have a problem with how they put some of the story lines. In the anime, it seemed to be much better placed then in the books. There are times when they talk about Domeki even though we have pretty much never met him before but they talk about some rather special things about him. The animation seemed to be much better in bringing him into the story and explaining more about him. On contrary, when it came to Himawari, we got a lot more information even if it was cryptic in the manga instead of the anime.

The artwork is rather striking, just like the anime. Unfortunately, it does have a couple of downsides. Because of how dark the manga is, the characters become masses of black blobs when we see them far away, and the details sort of fade off until you can’t tell who it is. The characters have the same problem as the animation where the bodies feel stretched and heads a little too small for the bodies. This does give the manga its on style away from most of clamps work even if it is a bit creepy. A downside to it having its on feeling is how stringy some of the characters hair seems to be. Yuko’s hair flies around like spiders legs or smoke even when there doesn’t seem to be much wind. It is always getting ‘stuck’ on something as well leaving fine lines on the page. Sometimes the images become too crowded with elaborate designs of smoke that although give the feeling of shop and some places around it a rather mystical setting, it takes away from much of the detail that should be shown or left blank. I normally don’t see any actual shading being done but when they do use it, its pretty much jet black blocks. There aren’t really any halftone patterns that I can see, and if there are, it’s very few using more of pen shading. There is also the little matter that they have no shin in there eyes, making them look a bit dead sometimes.

Story: Watanuki, an orphan who can see youkai, stumbles upon a shop that grants wishes, but only for a price. The owner of the shop is a mysterious lady named Yuuko. Together they man the shop as Watanuki learns more about his self and ominous constitution.

Art: This is the type of art I prefer in a manga. It reminds me of Natsume Yuujinchou.

Characters: When you compare the Watanuki in the beginning and at the end, the change is depressing. (Spoilers) The loss of Yuuko really took a toll on him. I really liked Shizuka because even though he wasn't straight forward about it, he worried about Watanuki a lot. I need a friend like Shizuoka 😿