What Does the Fox Say? - Recommendations 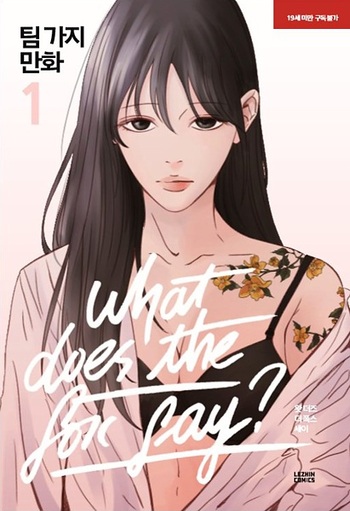 If you're looking for manga similar to What Does the Fox Say?, you might like these titles.

Cho-eul and Ju-ah have been BFFs since childhood. In high school, they shared a kiss, but it was only because Cho-eul said she was bored. They’ve continued to be inseparable, but only as friends. Deep inside, Ju-ah wants things to be different and even Cho-eul senses - and toys with - this unspoken tension. So how close is too close? What would happen if besties crossed the fine line between friends... and desire?

They're from the same author and artist and are quite similar even though What does the fox say is a full story with a handfull of important characters while Pet's aesthetics/Tightrope is short and only focus on two girls. In both, the art style is the same and the conversation/thought spelled out to the reader are kept to a minimal meaning you can enjoy the story and beautiful drawings without drowning in endless or pointless dialogues/monologues. If you're in for the sexy part, they both have it, and if you like how they aren't any forever flustered schoolgirl discovering her sexuality, it s the same.

Both of these are about hot lesbians who don't make facial expressions, if that is your thing

What does a Fox Say and Citrus are both very exciting to read! I love the adult content that each has, although What Does a Fox Say has more of it, and is lighter on page illustrations. Both are are my favorites!

Jung Erae has no clue about relationships and men to the point where she drives every man away. Desperate, she seeks help and ends up contacting a love doctor, Cha Yoon. Strangely enough, Erae starts developing newfound feelings for this so-called doctor.

Both shows have a similar style of drama. Drama that is not based upon frustration but on understanding. However, understand the situation as the reader does not make the choices any easier. If you like the romance in one, you'll probably like the romance and drama in the other one.

Back in high school Sono confessed her love to Sato, but she was turned down. Now she lives as a freeloader in an apartment shared with her girlfriend, Hiroko. However, she still hasn't forgotten about Sato and when she cries out her name while having sex with Hiroko, she finds herself in some serious trouble...

"I'm making you my 'personal' assistant, effective immediately. Now, serve me with your body!" Yuumi's plain-old life as an office worker completely changes after becoming personal assistant to her company's young, elite president. Day after day she's made to serve his carnal desires at night in his office and even in the suite of a luxury hotel. Her initial embarrassment disappears as her body twinges in ecstasy every time he touches her......!!

Sena's built the perfect life for herself. She a has a caring boyfriend, a job she actually enjoys, and all the comforts she could hope for. But behind her happy facade, she hides a past marred by a past relationship with another woman. Jinri isn't thrilled to be working at an office, much less to be running a department her father set up for her. She's spent years living a carefree live and adding to a long list of casual relationships with men and women. When these two meet, they'll have to re-evaluate their lives as well as the men and women they share it with.

Jeongwon, who is traumatized by four-wheeled vehicles because of a car accident, got a ride from Kim Jisoo's bike by chance during the new semester. She falls in love with Jisoo at the first sight together and gains an unknown sense of freedom. Hwayeon, one of Jeongwon’s close friends, is aware of Jeongwon's feelings and panics. The more she tries to separate them from each other, the more Jeongwon wants to get closer to Jisoo... However, Jisoo avoids Jeongwon, and Hwayeon interferes with Jeongwon's growing feelings because of her unpredictable attitude...

Han Bomi is a paralegal who moved to L&B law firm after being caught up in rumours that she had seduced a man with a fiancée. There, she meets Eren, the new CEO of the L&B law firm, a man with a dangerous vibe. Bomi’s resemblance to someone attracted her to Eren and although he is constantly concerned about Bomi, she always feels intimidated. “Don’t flinch. There is no one who can hurt you. Yes, I wasn’t like this from the beginning. It won’t be easy but I’ll change slowly but surely.”