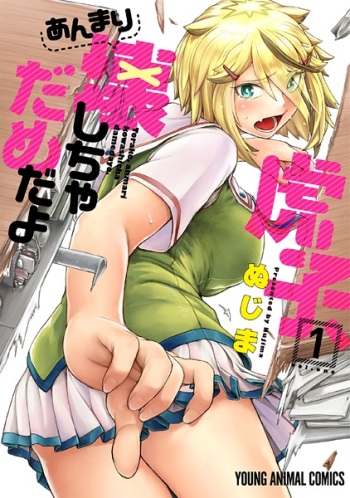 If you're looking for manga similar to Torako, Anmari Kowashicha Dame da yo, you might like these titles.

The new student by the name of Makato Kousaka transfers to a school full of delinquents which is currently undergoing a battle between the various student activities committees. His fleeting expectations of a delicate and loving school girls and a peaceful school life go out the window the moment he meets the declared queen of the school Onizuka. What will happen to the school life he dreams of in this romantic/comedy of two unlikely partners in school full of delinquents?

Kanojo no Kagi wo Akeru Houhou

Haruma's first impression of the new transfer student, Chitose, would be striped panties. Running into her in the hallway, Chitose's panties greet Haruma before they even know each other. Immediately, Haruma finds himself attracted to this mysterious panty girl, only to find out that she is transfering into his class and she's going to be the new house keeper at his apartment.

This dark and intense drama is set in a boy's high school where Kujo becomes the official leader of a gang. Kujo must constantly defend his position by playing a dangerous rooftop game with the other boys vying for his position.

A conversation between two high school students Kiyoko and Mari as the former talks about her ambitions of becoming a dictator after graduation and how she will change the world with her iron rule.

This is a tale of modern-day magical ninjas. Reito is just an ordinary guy, who wants to maximize his own happiness by being cool and not thinking of others. However, his stupid, annoying, large-breasted neighbor Iona Shiragami keeps trying to be his friend. One day, he learns her secret: she's a ninja who guards a powerful family ninja art, and other ninja are here to take it from her. When Reito is killed in the crossfire, she uses her magical ninja art to bring him back. However, the art also turns him into a super powerful monster. Will he be able to turn back to how he was before, and what will become of his life now?

Origawa Industry Public High School is a school filled with rough men. There's only one girl in this high school packed with wolves. But this little sheep isn't an ordinary person!

Nakanishi is fresh out of reform school and stuck at a dead-end job with an abusive boss. But when an internet friend tells him about a game called Duds Hunt, he soon becomes deeply involved in a new life full of excitement and violence. Reaping thousands of yen from the misfortunes of others, Nakanishi comes to love Duds Hunt – but where does it end?