The Comic Artist and His Assistants - Recommendations 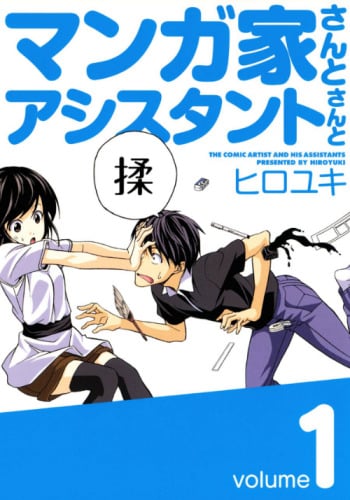 If you're looking for manga similar to The Comic Artist and His Assistants, you might like these titles.

Umio is a shy kid who just started his part-time job at a manga store smack dab in the middle of the city. But his lifestyle isn’t as glamorous as the neon lights that illuminate the city. Umio’s closest friends are his co-workers who are all unique characters, to say the least, and although they're nice people, they have their quirks. They are a tight knit group of friends, have nicknames for each other and spend their weekends inside, sheltered from the extravagant scene happening on the outside.

A Zoo in Winter

Kyoto, 1966. The young Hamaguchi is working for a textile manufacturer whilst dreaming of becoming an artist, when an incident at the zoo forces his hand. He moves to Tokyo at the invitation of an old school friend who also arranges an interview at the studios of the famous mangaka, Shiro Kondo. Here he discovers both the long hours of meeting studio deadlines along with the nightlife and artistic haunts of the capital. For the first time ever, Taniguchi recalls his beginnings in manga and his youth spent in Tokyo in the 60's. It is a magnificent account of his apprenticeship where all the finesse and elegance of the creator are united to illustrate those first emotions of adulthood.

Kaoruko Moeta is a 15-year-old high school student and manga creator who uses the pen name Chaos. After ranking at the bottom of a reader survey, Kaoruko's editor recommends that she enter an all-female dormitory for manga creators. Kaoruko's roommates are shoujo manga creator Koyume Koizuka, teen romance manga creator Ruki Irokawa, and shounen manga creator Tsubasa Katsuki. The girls support each other as they work to become better manga creators.

This manga follows the residents of Tokiwa So – a beat-down tenant apartment in Tokyo for manga artists. Maga Michio is a 21 year-old aspiring artist who is keeping a journal of his experiences as a starting out artist. When Konotera Yukie comes to stay with her younger brother, Michio is smitten. But Yukie has come to take her brother home and send him back to college – her father thinks that being a manga artist is no way to live. Can Michio convince her that her talented brother should stay? Or will she be the inspiration for his latest character design?