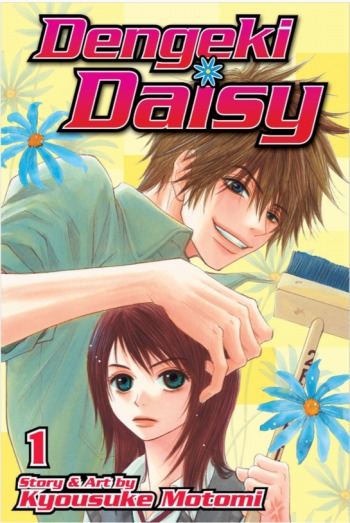 One of the few manga's who actually had me shedding tears. I have to admit, it is "just another shoujo manga," but there are several elements in it, that kept me hooked. I read through it all, in just two sittings. Even if their age difference is bigger than most readers enjoy (though to me, that makes things more interesting), it has a challenging plot.

Teru, a girl who's brother left her a cellphone before he died, gets in touch with this person called "Daisy." Who helps her through her daily life, gives advice and is the virtual shoulder she cries on whenever she needs it most. At school, strange things happen when she meets the Janitor Kurosaki. Through an unexpected incident, she has to work with him. She unconsciously gets closer to him and opens up towards him. She tells him all about Daisy, but little does she know..

All kinds of incidents happen ever since they met and Daisy seems the only one who can fix things. Whilst Kurosaki tries to keep his secret hidden from Teru, he also tries to get closer to her.

It is a rather interesting manga, it does not get boring as it involves romance, hacking, kidnapping and loads more. I suggest you read it. To those who've read Taiyou No Le, Switch Girl, Ao Haru Ride, Ookami Shoujo To Kuro Ouji and/or Sukitte Ii Na Yo, I recommend it. It's a lovely manga that gets you on the edge of your seat, longing for more chapters!

It is by far my favorite manga and i have read it 4 times, although i must say it is not perfect,I would recommend it whithout question!

It is a reaaaaally good story but the ending felt rushed and some questions remained a bit cloudy or never answered at all that is why i can't give it a perfect score :(

The characters are the best part in this manga. They grow as the story goes, they are realistic and by that i mean there isn't one character in the story that portaydes as perfect, they are far from that!

As for the protagonists...well... They are unique and they won't bore you. It is not the classic boy meets girl concept, and it is definitely not the usual silly characters that blush every two seconds and say stupid lines etc. ! have read a lot of shoujo and although i might enjoy the general story i am really tired of meeting the same type of characters over and over, so yeah...This couple is the best ever!

The humor is another thing i greatly enjoy in this manga. It's clever, rare thing... I laugh my heart out every single time i re-read it and for that alone is worth reading it.

The drawing is also really good and clear,i enjoyed the details in the backround apart from the main scenery.

I'd suggest you start reading like NOW! :P Have fun!

So I read some of this for Secret Santa and made through volume 8.

For a shoujo, it's actually pretty good and, despite using a lot of typical shoujo tropes, doesn't feel as forced or as midly creepy as most shoujo tend to. I couldn't entirely get into it because I'm not a fan of the demographic usually, and I got sidetracked with other things going on, but I didn't hate it.

Teru is a very refreshing protagonist. She's actually capable of things, knows what she wants, and has a good amount of character development. She's held back by trauma but in a realistic way, and gradually learns how to cope with it and how to move on.

I wasn't a fan of Kurosaki, but at least he wanted to make sure Teru was okay with what he was doing and he genuinely cared about her and her wellbeing. I can see the age gap putting people off, but he's a nice guy. Could do without the jokes about him being a pervert/lolicon, even if they're harmless, but that's probably just me, lol.

Once the story got to the hacking stuff in volume 8, I started to lose interest. The first part of the manga had a lot of development, and I appreciated that the characters were actually talking about things and trying to address problems that in most shoujo wouldn't even be brought up until the last arc. But once certain things were resolved, I feel like it started to drag on. It's also not helped by the hacking side of things being extremely unrealistic and outdated -- although I'm aware that that's the least important part of the story in the end.

One of my main issues was that I couldn't find a character I liked enough to keep going, and to me, characters are the most important part of fiction. I liked Teru, but I still didn't get attached to her that much.

If you're a fan of shoujo and romance you'll probably really like this, and I totally get why it has high ratings and why people enjoy it. It's not my thing, but if you can look past the inaccurate hacking parts, I'd definitely recommend it.

I think if I was in a different mindset I would've liked it more, maybe. Overall, it's not bad, it's just not for me. Still one of the better shoujos I've tried, though!

This is my favorite manga of all time. If I could pick one manga to become an anime it would be this, as long as they changed nothing. Its got almost every type of humor known to man, it has intrigue, mystery, and romance thrown in. It's the most amazing thing I have ever read. Its sweet and endearing in the romance department. It is by the far the best thing I have ever read.

This story is about a highschool girl (Teru) whose brother has passed away and left her under the care of the mysterious Daisy who she only talks through with longgggg text messages XD. Seriously though, why does japan refer to them as emails? Stahp.

So anywho press the fast forward button and Daisy and Teru have met and know that each other knows that he's daisy (its suppose to be a secret). And honestly things get a little dumb cause the conflict jumping in and ruining things for our otp.

The good thing about Teru is that she excels at going against the stereotypical highschool anime girl. Really great stuff.

So thanks to Teru being a bad butt Daisy and Teru are reunited (I keep calling him Daisy to leave y'all in suspense muaha..ha...) and we watch them kick butt together.

This is as vague as I can get without spoiling a lot XD.

Really enjoyable series. I was pleased with all of it. The humor was top notch and the romance was satisfying. It would've been even better if there was a bonus chapter of Teru grown up and getting married. Eeepppp that idea makes my heart sing.

Its not a masterpiece but it is definitely a good read and will make you happy with the ending.