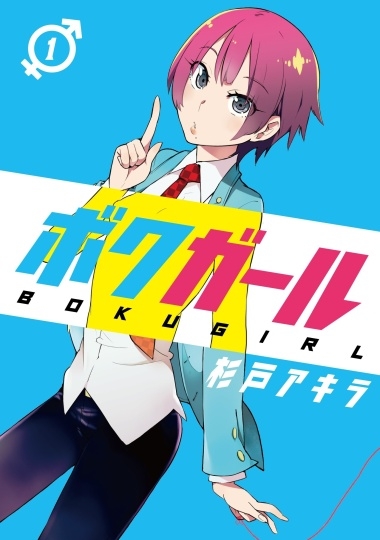 I don't think I've ever gotten this emotional over a romance manga... maybe even any romance in general. Most of them are just too cutesy for my tastes to really get into it, or too much of a comedy for the characters to carry weight on my heart - that's why until recently I've typically avoided romance works.

But damn it this one tugged on my heart strings.

Story: Starts off with your typical gender-bender opening trope. The MC: is a slightly effeminate guy, has a crush on a girl, has a macho best-friend that he's been friends with since forever, and then through whatever process the author conjures up he turns into a girl (in this case Loki, prankster god[dess] sends a magical wasp to sting him and initiate the change). But the story takes off from there in ways that either break the tropes of the genre in creative ways, or surpasses the genre's tropes and becomes some of the best examples of them. The story has beleiveable twists and turns, well-thought-out introductions and interactions, and most importantly it has a satisfyingly lengthy development. Each chapter provides something meaningful to the story without dragging on, so it never overstays its welcome, and at the same time each chapter provides the necessary exposition and character development to make sure the work feels fleshed out and not rushed. My only complaints here are probably intended reactions by the author. Some developments and events made me feel frustrated with the turn of events - not because they were poorly written, but rather the opposite: they were so believeable they carried with them the weight of real-world emotional impact, and really brought me in line with the emotional state of the MC.

Art: Holy crap this is well done. So much beautiful detail in almost every panel. Characters are always on-point in their designs, outfits look incredible and appropriate (and there's so much variety it's wonderful), and backgrounds carry an incredible amount of detail without detracting from the foreground. Proportions are consistent (excepting a few comedic moments where chibi or exaggerated character models are used for effect), and nothing feels out of place or sloppy. Honestly this is some of the best manga art I've seen, and the only reason it doesn't get a full 10/10 is because it's not in color. There's a pseudo-chapter in the middle (an Omake I beleive) that's in full color, and it was so good I lament the fact that the rest of the actual Manga isn't in color.

Characters: Jeez, there's a lot to unpack here. There are many characters that appear, and every single one of them feels unique and appropriate. Every time a new character was introduced, my heart sank at the thought that it was going to be some ass-pull moment to throw a wrench in the plot like so many other stories I've read, but after just a handful of chapters or even just a handful of panels, I was already on-board with almost every one of them and fully accepted their role in the story. Everyone is given an appropriate amount of backstory to provide a context for their motivations and actions without going into more detail than necessary. Every character has unique character traits that make them amusing and believeable. Really just a superb job all around. There really are only a couple of characters that I didn't like or appreciate, and honestly that's probably just my personal preferences and not any failing on the author.

Overall: Most definitely worth the read. The most solid 9/10 I've ever given. There's so much that the author did right that there's not any room to complain, but there's just enough room for improvement that I would have preferred to see that it's not quite a 10 for me. Quite frankly I would by lying if my reaction to the ending didn't play a role here as well; for the sake of not spoiling anything I'll just say that I would really have preferred to see the ending play out differently, but I fully understand why it ended the way it did. I'm comfortable with the ending as it is, but sad that it didn't quite end the way I wanted

Note on tags: The Nudity tag is fully deserved - as part of the Gender-Bender aspect the MC will frequently find themselves bare-chested, and even in the company of other bare-chested women.

This is just the best! I hope soon in the future this will have an anime adaptation.

It was actually pretty entertaining but for such a simplistic plot it's too long. So naturally, I got bored and dropped it.

No comments see for yourself