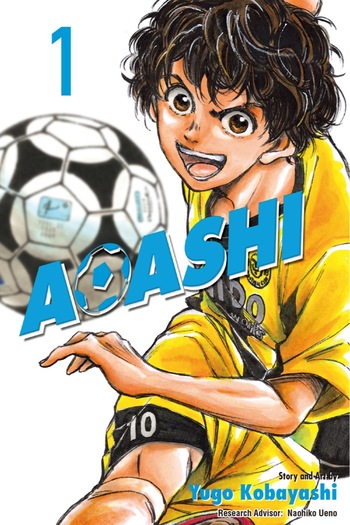 Oh the feels. You really get engrossed in all the characters and the stories and the soccer. A lot of concepts and tactics are explained int eh flow of the match. I find that very interesting and eye opening. They have an array of wonderful cast that leave a mark on you. Character taht you hate/despise and some you end up crying tears for. Lots of plot and character development. Great read. I just feel so engrossed in the story as I read it.

You see, the world of sports manga/anime has become a bit typical - most of them follow a pretty similar formula. Overly optimistic main character who doesn't have a single mean thought in their heads, usually kind of stupid, but has a love for their sport and some kind of hidden genius. They join a team of other quirky characters all with their own hidden strengths and aim together for nationals or whatever. *yawn* it's so typical now it's boring.

Aoashi starts off seemingly following the same formula - but after several chapters, it immediately differentiates itself with amazing character depth. Ashito is a great main character: he balances the great energy and determination of main characters you find in other shounen manga with the perceptiveness, struggle, and growth you find in seinen MCs. He has streaks of optimistic goodie two-shoes, but he also gets angry, frustrated, and even resentful at things/people like any reasonable person would. This makes him feel more realistic than a lot of other shounen MCs.

All of the characters are struggling not just with overcoming their limits in the sport, but also in their actual lives. While most other sports manga focus on high schoolers hitting regionals/nationals in high school world, these players are aiming to become world league players - so for many of them, it's do or (figuratively) die, making it so much more impactful. They're more than just kids who are pumped to play soccer. They have complete personalities and reasons for their behaviors. Most importantly, there's a notable change and growth in most of our primary and secondary characters, and unlike other sports shounen, this one actually also manages to work in some romance as well.

There are so many complex and interesting characters, and the way they are initially introduced and then redeem themselves is extremely satisfying. There are some ~300ish fan-translated chapters and somewhere around high 200s officially published chapters (all in Japanese currently). But all of those chapters go by so fast, it's so good.

Some of the art could use some work, especially at certain angles. But for the most part, it's very good and doesn't distract from the story.

Give it a read if you're looking for a perfect balance of feel-good and drama.

Here's the thing: I definitely got on board with Aoi's bird's-eye-view ability and get hyped whenever it's portrayed well, but that only makes the weak portrayals of it all the more disappointing. Earlier in the series, I feel like it actually slowed down and showed some of the thought process and stuff which actually built up the epic-feeling moments (like in chapter 50), but lately it seems to be a lot more just shallowly showing the after-effects and treating it like a superpower (if that makes any sense). In the last two matches Aoi has played, we've also seen a lot of flaws within this vision ability--especially relating to the attempts at predicting stuff--which just leads to marring these moments with a sense of distrust (as to whether Aoi is accurately seeing things or not). So what used to be moments of hype and giddiness are now just feel-bad moments of potential disappointment. I think a big part of it, too, is that intuition and gut reactions are being portrayed as a necessity at this level of play, and it's difficult to captivatingly portray an intuitive response. If they had Aoi thinking through the plays in feir head and showing how fe has to adapt to feir opponents' actions, I dunno, that might be more awe-inspiring. And I don't like the distorted vision shit or the way they'll have Aoi apparently not having feir ability activated at some times just to create more tension and have fem create mistakes that fe can then overcome. It just feels like lazy, stupid writing and it ends up making feir character feel inconsistent. On top of that, large portions of this manga have little or nothing to do with Aoi's ability and are either focusing on other players or other aspects of the game, but I honestly have trouble getting into these moments on their own because I'm subconsciously just hoping that they're building up to some epic Aoi moment.

The basic pattern for this story is that Aoi will encounter some failing that fe needs to overcome and eventually come to some sort of epiphany about it, usually with diligent training in between. So far, it's been fundamental-type things like passing or the triangle or defensive shapes or head-turning or calling out instructions. There are long-term goals, but also short-term points of interest within any given match. Aoi is shown to have very quick growth. Which allows the story to have the option of settling into a tournament style of vibe, as it's currently doing, or to have fem be promoted or move on to the next stage in feir career if things ever risk feeling stagnant. The thing is, even though I say the story has that option, I don't think that option will actually be used going forward. For the simple reason that I think that Fukuda being Aoi's coach is the final resting spot, storywise. Though honestly, I'm not even sure if I care about Fukuda as a mentor...like at all.

I didn't care for the heavy comparisons to real-world teams and players within the Seiran-Funabashi match, since I don't actually follow the sport in the real world and it just made it feel less resonant. The number of girl audience members who provide some commentary and stuff increases over time. Several of them seem to have crushes on Aoi. They include coach Fukuda's sister Hana, the daughter of a donor Anri, the sports reporter Kaneko, Tachibana's sister and a player femself Miyako, and Takeshima's girlfriend Tae. I think some of the interactions between Aoi and Hana are pretty cute, but it's also slightly saddening that any romance seems unlikely. The art is very well done. Detailed, gritty, good panel-flow and angle choices. They like showing black (or white) gunk oozing off of people as a significer of intensity--an aura.