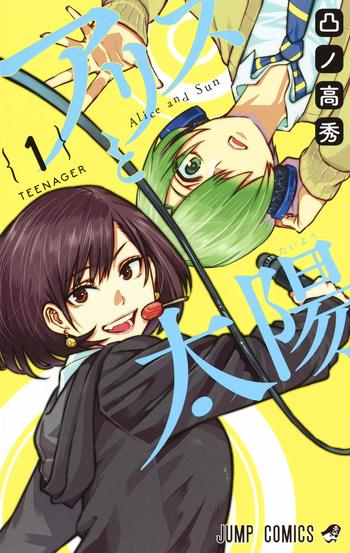 One of the new series that came out in Shonen Jump this year, I was actually hyped for this series. But then it turned into complete disappointment.

Taiyo Suzuki is seemingly a kid who’s faced enough distaste for his creative efforts that he wants to remain a mild-mannered individual, content to live life in mundane obscurity. Alice & Taiyo is the story of Alice Shinohara pulling Taiyo up out of that funk and getting him to experience the joy of creativity again. Sort of. That’s really only the first chapter. After that the story seems poised to be one of total success without a trace of adversity. For now it looks to be a purely feel good story, and not once here does either protagonist face an obstacle, outside of Taiyo’s anxiety, which is overcome with such ease I can’t even really call it an obstacle, more a minor hiccup before the two are showered with heaps of praise and not an ounce of criticism.

My disdain for the series comes from it being little more than the manic pixie girl narrative. We have a seemingly mild boy who is taught to experience the joys of life, in this case his musical talent, by a quirky girl who’s bubbly and all smiles. It’s an overused narrative at best, and male fantasy at worst. Taiyo has incredible music talent, but is misunderstood from his early teen years thanks to his use of vocaloid, an often derided subset of Japanese music, where a computer produced voice sings the lyrics as dictated. Think Hatsune Miku, or Super Sonico, the most famous of vocaloid personas. (The manga doesn’t really explain this for Western readers, not that it should, but there you go.)

Frustratingly Alice & Taiyo also feels like a beat for beat rip off of Your Lie in April’s early events, but without any of the adversity or drama. Cut a few of the more tear-jerker elements from Your Lie in April and you’ve got Alice & Taiyo, an entirely superficial experience about two people seemingly destined for success. Not once in these chapters does it feel like they have anywhere to go. Both times Alice & Taiyo play to crowds they’re immediately lavished with praise and applause. Even actual artists, ahead of them in the game, became ashamed of their non-professional attitudes, due to the sheer stunning nature of their performance. If these characters are merely in need of an avenue to showcase their already perfect talents, turning vocaloid music from a laughably perceived subgenre (the Manga’s stance, not mine) and into something undeniably profound, what’s the point? Why do I care? Why do I want to read week after week about these characters whom success is merely waiting for? Where’s the struggle, where’s the tough times, where’s the hard work? Credit goes to Thomas Daniell. I recommend Beck or YLIA over this series.