Wrath of the Ninja - Recommendations 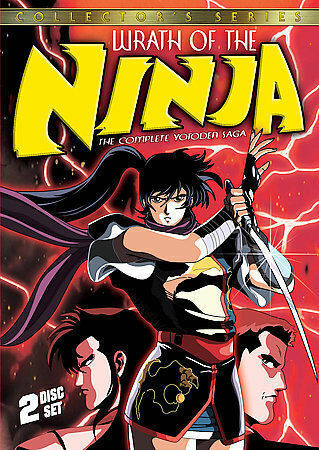 Red Shadow is a ninja who wears a red-and-black costume and a stylized red mask. His adventures take place in Feudal Japan, and he and his ninja sidekicks Aokage and Shirokage fight evil warlords, wizards and daikaiju using modern high-tech gadgetry.

A half-man, half-beast is chased by foes wielding power of an unpleasant nature. He would certainly be slaughtered, his mission failed, if not for the intervention of a wandering mercenary -- Kibagami Jubei. With the last of his strength, he gives Jubei a mysterious jewel, thereby transferring his mission: deliver the jewel at all costs to the Priestess of Light. The mystery of the jewel's powers, and the identities of those fiends who quest for it... these are questions whose answers will only be found through blood and battle.

A recap episode of the first series; The Legend Of The Dog Warriors: The Hakkenden.

Continuation of The Legend Of The Dog Warriors: The Hakkenden.