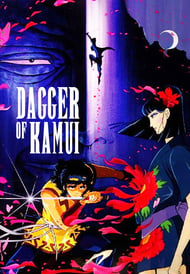 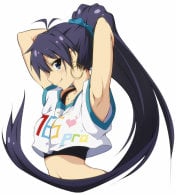 Kamui no Ken is probably one of the best movies ever created. It is truely an experience one will never forget.It has: Ninjas Self Discovery Betrayal Revenge Love in the midst of battle Love lost Love Triangle Trial against great/powerful enemies Slavery A journey to america The wild west Cowboys and Indians A pirate's treasure Seriously what more could someone ask for? This movie literally has everything. If you don't love this movie you don't know shit about anime. I'm not even saying that out of personal taste, it is impossible to dislike this movie. Everything is tied together so well that it amazes me every time I think about it.  "Wow that was the greatest thing I have ever seen." "Seriously badass"       -Me and Everyone Else I Have Ever Shown This to. Please watch this movie. I garantee no one can name anything in the same genre that has this much content while still being easy to understand and still wrapping up every part of the story. Doesn't matter who you are, you will love the shit out of this movie.

Being a fan of the good old hack n' slash anime ninja movies, I had to check this title out. I wasn't really expecting, much I didn't really get all that much either. Story- Okay so the story is about this guy named Jiro and he is framed for killing his own parents. Well except he did kill his own father, but he didn't realize it was his father. So he vows to take revenge on the one responsible, a monk looking dude by the name of Tenkai. So theres Iga and Koga ninja clans in this (surprise surprise) and they're duking it out and what not, but our boy Jiro is a lone ninja and he has a special dagger (guess what its called) It was made in a foreign land and has foreign script on it and he wants to find out the mystery. This is where the story kind of gets strange. So Tenkai is contantly sending ninjas after him and and he has to fight them off and at one point he meets this black slave that helps him get on this ship that takes him to Russia... yeah I'll let you find out the rest by yourself lol. Animation- The character designs look a bit too plain for my tastes... and kind of blocky at times, but they're still not bad. The animation is fairly good for its time. Some interesting animation techniques were used and I think this might be one of the first anime to use the whole "sparking/glowing" blood thing... it actually doesn't look too bad. Sound- The usual fare for this kind of movie, classic Japanese sounding stuff. The ed theme was kind of really sad though. Also when the ninjas attacked people they would make this really annoying sound... Characters- Jiro is a pretty decent char and hes got the whole tortured past thing too. Tenkai is your basic really evil Antagonist with no redeeming factors. All the side characters are a bit like stereotypes... there is kind of a twist with two of them though, wihch was somewhat interesting. Overall- If your a fan of ninja anime movies, that always seem to have the whole Koga v.s Iga thing then you should check thing out. Since its so old I'm guessing most movies of this genre drew inspiration from it in some form. I'm talking about stuff like Wrath of the Ninja, Ninja Ressurection, Ninja scroll, Blood Reign: Curse of the Yoma. So if you enjoyed any of those, I would say this is worth giving a shot.

WARNING: SPOILERS FOR THE FIRST 30 MINUTES OF THE MOVIE AHEAD This movie comes flying out of the gate, which at first seems cool, because it starts immediately with a mother and daughter getting murdered, the son (Jiro) being blamed for it, and then chased out of his village, fleeing for his life.   But then the roller coaster just kind of goes off the rails. Jiro is found by a priest named Tenkai, taken to the man responsible for the death of Jiro's family, given the opportunity to assist with killing this man, is trained to be a good fighter, and meets a side kick of sorts. After that he runs into a random woman, who after a very brief discussion, is revealed to be his real mother. This is followed up quickly by the revelation that the man Jiro helped kill, was Tarouza, his real father. Then theres a surprise attack, which leaves his real mother dead, and then he parts ways with his side kick.   All of the above happens within the first 30 minutes of the movie without any realistic explanation, or believable justification. It makes it all seem forced and cheesy.  And I wish I could say that the lack of story telling skills is balanced out by amazing action. But that's not the case. For the most part, battles, when they happen, are quick and lackluster, without any introduction of the new characters, or explanation as to why they are fighting.   And without giving away any more plot points, this is basically the pattern that this anime continues on with until the end, with a super cringy "love story" thrown in for good measure.  The anime is constantly throwing new characters at us every 2 minutes it seems. You meet a character, you think they will be important, you get the impression you're supposed to think they're important, and then zero effort is made to make you establish a connection with them. And in the very rare carlsen that they do try to flesh out characters (such as the love interest), it is super cringy.  The animation, despite being clearly dated, is still pretty good for it's time. It was clearly top of the line in its day.