Saekano: How to Raise a Boring Girlfriend Flat - Reviews 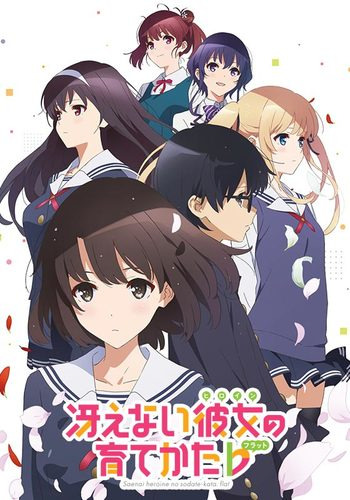 Harem's aren't really my genre, because I guess guilty pleasure but for some reasons I find myself enjoying this season and so I'll tell you why, his is just a personal oppinion though.

While season 1 focuses on the Harem plot where girls just goes around with out otaku Tomoya, this season is quite different, for me aside from the harem it tells us how hard it is to create something, we can see the casts suffer from slumps and rejected ideas and although we've seen this in other animes I still find it well executed.

The Romance are stll there, nothing really new but I do wanna say that the they are really showing us flags on who will win and if you don't know who she is then ......A Coquina clutch for you.

now here's the heart of the sereis the casts, I can say that they are developed but I think they still need a room for improvement.

Tomoya- yes at first he's just your typical harem MC-kun who all of a sudden has his own harem, but in this seaon you''ll both love and hate him, although what he did is normal for me considering there is no such thing as a perfect character, I like tomoya is getting matured episode although it's rushed, and I like the fact that he is quick t orealize his mistakes and will try hard and will even support his cicle no matter what.

Megumi- the main heroine, well I think for the characters here she has the most obvious chaacter development, at the begining she just forced to join but in the end she ends up having the most passion and commitment in finishing the game, and the way how she steals the show everytime I find it unannoyin actually.

Utaha and Eriri- since they're both rivals i think I should combine them, I still think they need room for development although they have quite matured since before they are just only after tomoya, I'm glad that they're starting to think what's next for them and they manaaged to make decisions based on what will happen to them.

Iori- Tying with Megumi is this guy, he also has an very obvious character development and I won't say it to avid spoilers but all I can say is that I really liked him in this epiosde...also....PLEASE PAIR HIM WITH EITHER ERIRI OR MICHIRU

Michiru and Izumi- since they got the least screentime all i can say is that If there's a season 3 they could have much more screentime, despite being just there they are likable enough.

Sound and Animation: the animation is great and I like in season 1 I still like the character designs particularly Utaha and Kato, for sound It's nice I enjoyed the ending though

Overall saekano is the sereis that looks bland is actually matued at least for me lol though a room for improvement is still needed...I highly reccomend it

*Before I started writing this review I went back to my original review of the first season to see what I thought of it back then. And something that I already liked then and now again was the music. Also in this second season I liked the opening song called Stella Breeze. It’s one of those opening songs where I can’t pinpoint why I like it. It’s just: I liked it and that’s it.

*Something that I was very divided about in the first season was the animation. I really liked the sharp 3D animation of the backgrounds but not of the characters. I must say that here I wasn’t bothered anymore by the animation. I don’t know if the animation changed at all since it has been 2 years but it’s more likely that back then I wasn’t used to this kind of animation. I did not have a problem anymore with the animation.

*My biggest problem that I had with the first season was the lack of character development and the characters themselves being quite bland. Now in this second season I have to turn my opinion about that completely around. Here we get a lot more character development than in the first season. Already in the first episode we learn more about how Aki, Eriri and Utako are related and how this formed the relationships between them.

Let’s than talk about our main female character Kato. You could say that in this second season she is, between quotation marks, “neglected”. Purely based on screen time and influence on the story Eriri and Utako are way more important than her. But this was actually very cleverly done by A1. Because it was the fact that Aki was so focussed on Eriri and Utako to finish the game that gave Kato her development. And by the end of the anime I felt that she was finally starting to act as a true main heroine which was the goal of this entire anime.

But the development that I was really happy with was that between Eriri and Utako. In the first season they were just a duo of bickering rivals meant to deliver comedy to the anime. But now we learn how deep their relationship is and how much they depend on each other. The 10th episode where this reached its highest point was by far the best episode of this second season and the entire anime.

*Now on almost every level this second season was better than its first but there was that one thing that frustrated me enormously. It frustrated me so much that I had to make a FB post about it. It was the ending and more specifically how the anime leaves us hanging on several levels. First of all in the final moments of the last episode which was ep 11 btw, very short second season, we see something or someone which delivers a perfect set-up for the continuation of the story. The story was perfectly set-up to move into a new arc. And on top of that the anime leaves us hanging on the romance. It was so close to giving us an important step forward in terms on the romance but it denied us that. So overall this was an ending that isn’t an ending, it felt like a transition into a new phase. And I was so frustrated by that after watching the final ep.

Now you could be wondering “Hey JV, what are you bitching about? Just wait for season 3.”. True, but I believe that there won’t be a 3rd season. That is because this end of this season is also the end of the manga. I checked immediately after finishing ep 11 because I couldn’t believe that that was the end, but it is. The only possibility that remains for a continuation of this story is that they adapt the LN’s from which 2 volumes still have to come out. But I don’t think that that’s going to happen because the manga is officially finished. So I was extremely frustrated with this end that isn’t an end, it leaves me with to many ends that aren’t connected yet.

So as a conclusion, I enjoyed this second season way more than the first. Partially that will be because of me being more experienced in anime but also the way the story developed was way better in this second season. Unfortunately it had to leave me with that frustrating open ending. So overall I’m going to rate Saenai Heroine no Sodatekata b at 3,5 stars. Imo it still isn’t the greatest masterpiece of A1 but with this second season it passes.

I wasn't impressed really with the first season because I felt that tried to add too many characters at once and there was a lack of main character development. However, I had that assumption because I didn't know there was a second season. I went into the second season with kind of low expectations. However, it solved my most of my main issues with the the first and I felt all characters had good development (Especially Katou!!) . It was a lot better, especially towards the end and I was satisfied and impressed with it. I am now really excited to watch the movie and maybe the manga too. I hope it lives up to my expectations!! :)

The first season was alright but the show relied heavily on its great characters because the story itself was pretty lackluster. During the OVA's that followed the show actually addresses these issues themselves, mentioning all its own strong points and weaknesses. Almost mockingly telling the viewer to expect more from the show in upcoming season.

You'd think the show would try to step up its game after addressing these issues themselves and try to polish up the parts where it knew it was lacking. Well... They did.

The first season felt rather playful with a few little hiccups but you knew that every episode would end with a smile.

Some of the issues were mentioned but it never got the focus it deserved which is something the second season does and a whole lot more. No character is spared, they all go through quite an emotional rollercoaster.

The girls are still trying their best to deliver what is expected of them but the pressure and the emotional stress that they put themselves through becomes quite a burden on everybody. I wasn't expecting the show to be able to step up its game the way it did but it was pretty impressive which also helped adding an extra layer to the characters of the show.

The second season to alread a great anime. This season just magically covers up what all was missing in the first season and leads more into further character development. This leads to further defining them and make us fall in love with each of them. If you have watched the first season and found just someyhing was not there, I highly recommend going through this season too because it ties up the whole thing and leaves the otaku to watch the movie....